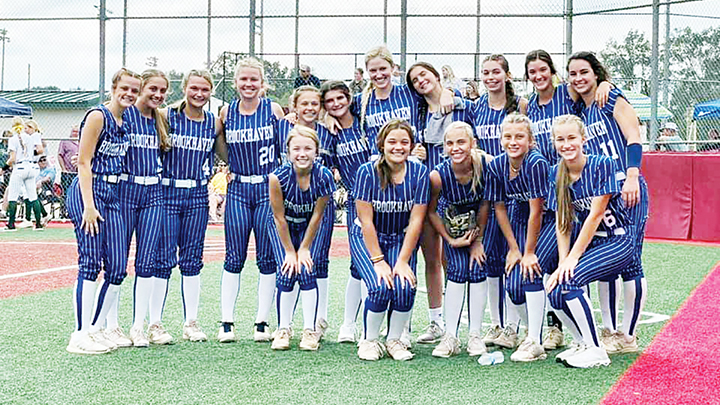 Photo submitted Brookhaven Academy plays for an MAIS 5A State Championship this week, beginning with a 6 p.m. Wednesday game at home. The Lady Cougars will host Silliman Institute then before playing at SI on Thursday. If a third game is needed, BA will host it Saturday.

The weekend could not have gone any better than it did for the Brookhaven Academy softball team.

The Lady Cougars and coach Becky Flowers won three games over the course of Saturday and Monday to advance in the MAIS 5A State Tournament.

The only unbeaten team during the first phase of tournament play, BA now moves on to a three-game championship series against Silliman Institute.

Brookhaven Academy hosts Silliman Wednesday at 6 p.m. for game one. SI will then host the second game Thursday at 6 p.m. in Clinton, Louisiana.

If a third and deciding game is needed, it will be played at BA Saturday at 11 a.m.

BA and Silliman are members of the same district and split their two regular season meetings. In last week’s 5A South State Tournament hosted by Brookhaven, the Lady Wildcats won the championship game of the tournament over the Lady Cougars after BA had beaten them once in tournament play.

The game was tied at 4-4 through four innings, but the Lady Cougars owned the late frames as a four-run sixth helped push them to a 10-4 win.

Felder struck out two and gave up eight hits while surrendering four unearned runs in the circle.

Freshman Kensy Covingto drove in three runs to lead the Lady Cougars at the plate. Felder had a pair of RBIs as well.

Moak, Richardson, Bailee Goodson, Bailey Parks and Emme Barrett all had one RBI apiece as well.

A two-RBI single by Covington got the BA rally run started in the sixth.

Brookhaven Academy (30-5-1) started play on Saturday with a 10-1 win over Magnolia Heights. They then beat Leake Academy 6-5 in a thriller to set up the matchup with Silliman.

Leake Academy came in as the no. 1 seed from the north division. BA tied the game at 3-3 with one run in the seventh and then scored three runs in an extra eighth inning.

Leake didn’t lay down though as they scored two runs in their half of the eighth before BA secured the win with a pop fly out.

A Miriam Wallace sacrifice bunt scored the first run for BA in the eighth and then a double by Alayna Daigle scored two more runs to pad the lead.

Moak homered in that win as well while driving in a run. Felder pitched the complete game win and struck out two while walking two. She gave up four hits in the game.

BA has never won a fastpitch state championship but made the title series in 2018.