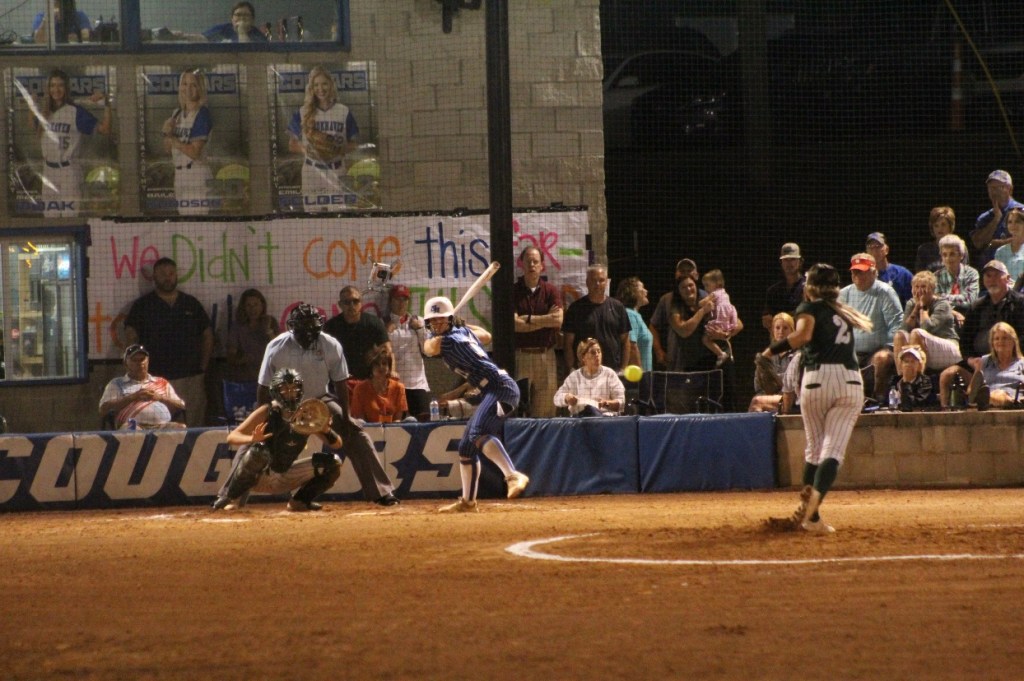 Silliman Institute crept out to a 2-0 lead after the first two innings against Brookhaven Academy Wednesday in game one of the MAIS 5A softball championship series.

The Lady Wildcats got those runs on a pair of solo homers and the quick lead by the visitors from Clinton, Louisiana caused tensions to rise for the large crowd that encircled the field at BA.

If at some point around 7 p.m. you felt a strong wind blowing in Lincoln County, it may have been the collective exhale of relief from the Lady Cougar fans, parents and BA student section.

That’s when the third inning ended with Brookhaven Academy no longer trailing — but leading 7-2. That would be the eventual ending score in the game one victory for coach Becky Flower’s team.

Once Brookhaven Academy pitcher Emily Claire Felder got past that rocky start, she dominated the SI hitters. Felder allowed three hits, walked two and struck out 11 on 118 pitches over seven innings.

A home run by Camryn Sibley put Silliman up 1-0 in the first and was followed by a Mckenzie Dubois bomb to start the second inning. The Lady Wildcats would then only get one hit off Felder over the final five innings.

The pivotal third for BA started off with a single by senior Madison Moak. The speedy Moak moved up to second and saw her teammate Abby Grace Richardson come to first after drawing a walk.

BA was aggressive on the base paths all night as Moak moved to third and Richardson to second on a double steal.

The pair then scored when senior Bailee Goodson hit hard ball to third that went for a two-RBI single.

Fellow freshman Bailey Parks laid down a bunt for the Lady Cougars and Silliman failed to cover first base on the play. The ball thrown into right field scored Covington and Goodson and put BA up for good with a 4-2 advantage.

Parks ended up on third due to the throwing error.

Flowers wasn’t done playing small-ball though. A bunt by Felder sored Parks and ended with Felder on second base.

Freshman Maddie Bullock scored later in the inning on another Silliman error and the final run of the game came after that when Moak — batting for her second time in the inning — hit an RBI single that scored freshman Emme Barrett.

The BA defense was clean and crisp behind Felder all game, but especially once the 7-2 lead was secured. Hard hit balls to the corner were easily snagged by Covington on first and Barrett on third.

Richardson caught for BA and Goodson played at short. Moak made a web-gem worthy snag in the seventh from her center field position. Eighth graders Miriam Wallace (right) and Alayna Daigle (left) held down the corner outfield positions for Flowers.

Parks, who bats fifth and has played catcher at time this season, drew the start at second base.

Silliman was missing some pieces due to three players being ill. Senior Alainna Weaver, daughter of SI coach Trae Weaver, was among those out.

The Lady Wildcats will likely pitch Sibley in game two as she’s the ace of the staff. Dubois took the loss after walking nine and diving up four earned runs on five hits.

Flowers didn’t see panic in the eyes of her players when BA went down 2-0, the team is comfortable with fighting from behind.

“It feels like we’ve had to fight back in every big game we’ve played this season,” said Flowers. “We just get so excited and deal with adrenaline and nerves. Especially tonight with a big crowd like this — it took us a minute to get focused.”

The teams will meet again today at 5 p.m. in Clinton for game two. If a third game is needed, it will be played Saturday at BA.

The Thursday meeting is the seventh of the season between Brookhaven and Silliman as the schools played twice in the regular season as district foes.

Playing for state titles isn’t new for Silliman. The school lost in the state championship series in 2018 in the old MAIS AAA classification. That same season BA made its first ever title series appearance and lost to Clinton Christian Academy for the AA title.

“I told my girls that they’re not going to roll over because we won game one,” said Flowers. “They’re a championship winning team and they’ve been here plenty of times before. We’ve got to refocus and be ready to fight for it Thursday.”