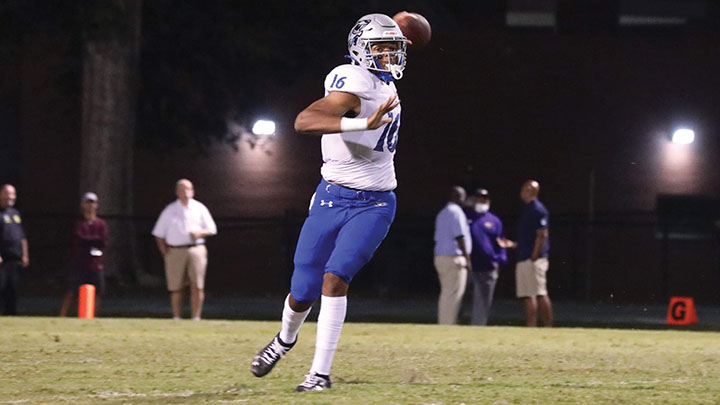 Photo by Co-L:in Sports Info Co-Lin sophomore quarterback Paul Hargrave went 23-of-41 passing for 235 yards, one score and one interception in a 23-14 loss at Hinds Thursday night. Co-Lin is on the road again next Thursday at East Central.

The Copiah-Lincoln Wolves (2-4) and the Hinds CC Eagles (4-2) were locked in a tight MACCC south division battle in the fourth quarter when a safety moved the Wolves to within 10-8 as only 14 minutes remained in the game.

A blocked punt set up a short field for the Eagles with 6:35 remaining in the game. Five plays and 30 yards later Hinds got a 3-yard touchdown run by Jamarian Samuel to take a 16-8 lead.

Any hopes of a CLCC comeback were dashed on the next drive when quarterback Paul Hargrave (Natchez HS) was intercepted by Hinds. A 34-yard rushing touchdown by Jeffrey Pittman put the Eagles firmly ahead 23-8 with 3:35 remaining in the game.

Co-Lin and Hargraves completed four straight passes on the following drive that culminated with the sophomore quarterback hitting Erick Rogers (Shannon HS) on a 25-yard touchdown pass, but the Eagles were able to recover the onside kick and kneel the ball for a 23-14 win.

Hinds led 10-0 at halftime before Co-Lin marched down the field on the first drive of the second half to get a 1-yard TD run by Bobby Shanklin Jr (Noxubee County). Sophomore wide receiver Tyquan Henderson (Canton HS) caught 11 passes for 135 yards to lead Co-Lin.