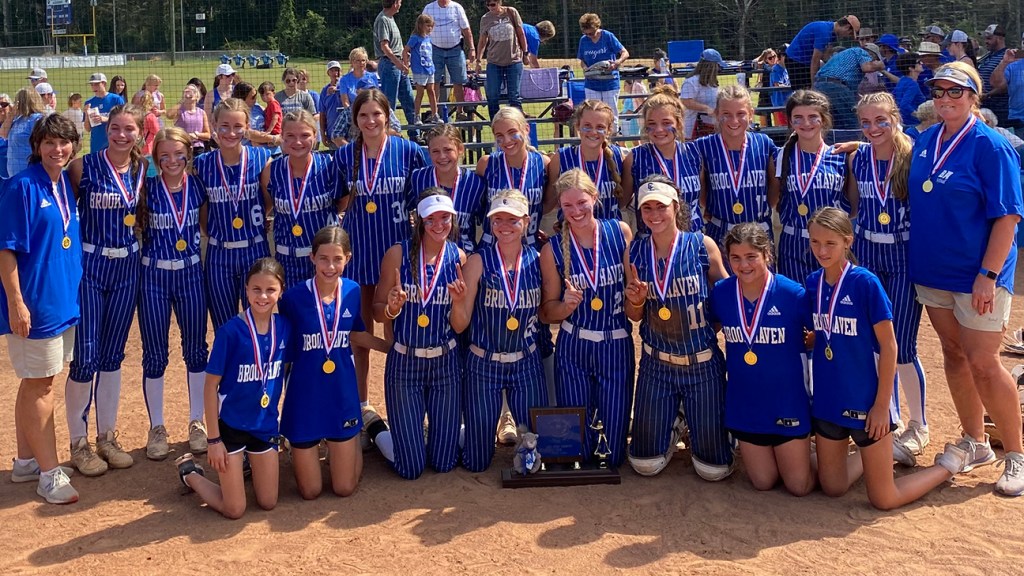 From the first pitch of the first practice in the worst heat that a Mississippi summer has to offer, this was always the goal for the Brookhaven Academy softball team.

The infield was strewn with discarded gloves and equipment Saturday at the teams on-campus softball field. Parents, sibling and all other types of extended family members stood shoulder to shoulder on the diamond — jockeying for position with iPhone cameras at the ready.

And in the middle of it all — wearing their blue pinstripes on a sunny, warm, beautiful October afternoon — stood the Lady Cougars, holding the blue-plated trophy that comes with winning an MAIS state championship.

Saturday the dream was reality as Brookhaven Academy outbattled Silliman Institute 9-5 in game three of their MAIS 5A State Championship Series.

BA had won game one Wednesday at home and then had Silliman even the series on their Clinton, La. homefield Thursday.

College football took a backseat Saturday to the deciding game as both teams had big crowds supporting them and making noise with cowbells, jugs of rocks, vuvuzelas and raised voices.

The Lady Cougars ended up with a 5-3 advantage in the overall series, but every game was close and nerve wracking as the familiarity of meeting that many times turned checkers into chess.

Saturday the players from Silliman did their best to put on some type of smile as they posed with the second-place trophy and lined up to receive their runners-up medals.

Silliman’s campus began as a women’s college before the Civil War. The school’s three main buildings were all completed before the turn of the 20th century.

It was one of the Louisiana-based private schools that joined the Midsouth Association of Independent Schools (the MAIS now, but the MPSA at the time) when the independent school association in their state ceased operating in 1992.

It’s in girls’ sports where Silliman has had its most success over the years with the basketball and track and field teams going on dominating runs at one time or another.

Softball though is where SI has shown the brightest. The team won three straight championships from 2015-2017. They played for the title again in 2018 before finishing runners-up.

As the teams swapped handshakes after the game, there were long pauses as the coaches and players from each side stopped and said words of encouragement to one another. This wasn’t two groups walking by and slapping hands while saying, “Good game.”

It looked more like the handshake line that happens when two NHL teams have finished a seven-game playoff series where blood was spilled, and admiration was built.

“We’ve got a lot of respect for that team over there,” said BA senior Abby Grace Richardson as she pointed towards the dugout on the third base line where Silliman was beginning to pack up their things. “They play hard and don’t give you anything.”

Brookhaven Academy has never won a state championship in fastpitch softball. The program got close in 2018 when the team won the south state tournament before being swept by their division foes from Clinton Christian Academy in the title series.

That team finished 37-5-1 and only had two seniors on the roster with multiple freshmen and sophomores playing huge roles. At the time it felt like future state titles would be a mere formality.

It’s not that easy though, is it? The next year the team finished as runners-up at south state but went 1-2 on the first day of the state tournament to end the season.

Last season was one that was one played under the constant cloud of COVID-19. When BA started practice in the summer, no one was sure what school would look like when it came to dealing with outbreaks and quarantines.

A season that never felt like it found its groove ended with a 16-12-1 record and a 1-2 showing in the south state tournament. It was Silliman who ended the 2020 campaign for the Lady Cougars in that tournament with a 5-4 loss.

With four seniors on the 2021 team who’ve committed to play college softball next year, no one wanted to walk away from this season wondering what could have been.

From the start, this group had a special feel to the players and their coach.

“It just felt like from the very start that we had everyone pulling together and working towards the same goal,” said BA coach Becky Flowers. “You could tell that they were locked and didn’t want to regret anything this season.”

Of the 32-6-1 record posted by BA in 2021, those six losses break down like this — three to Silliman, one to Copiah Academy in the south state tournament and two more that came in time-shortened tournament games.

The loss to Copiah was a jolt as it came at the Hansel King Sports Complex in the 5A South State Tournament hosted by Brookhaven Academy.

The plan had been to win district, win south state and then win the big trophy after that. Copiah threw a wrench in that as the Lady Cougars fought back to make the final game of the event before losing to Silliman for the title.

“We just had to reset after not winning south state,” said senior outfielder Madison Moak. “We knew we had the state title still to play for and that was the ultimate prize. We couldn’t beat ourselves up, we just had to play better.”

Did the pressure tighten up after the south state title loss? Mommas and daddies and mamaws and cousins pack the stands anytime the team plays. They’re there to support, but did their collective desire ever start to feel like pressure to the senior leaders?

“We put pressure on ourselves,” said senior pitcher Emily Claire Felder. “That’s where the pressure comes from for us. It’s not from our coaches or our fans, it comes from each of us wanting to be our best.”

One thing that helps break up pressure is having a laugh.

Early in the season the bats were a little too cool for the Lady Cougars as runs weren’t coming easy. Down in Wilkinson County one night a squirrel ran across the field. It provided a laugh, and the team went on to beat Centreville Academy 18-2.

Where you might have just seen a frightened woodland creature, the team saw a talisman.

“The squirrel ran all the way across the field and when we started hitting better, we said it must have been the squirrel that did it,” said senior infielder Bailee Goodson. “My grandparents gave me a little stuffed squirrel and we named it ‘Skurl’ and it’s been with us ever since.”
Skurl had its own hand painted sign behind the backstop Saturday. Look for it perched on the championship trophy too in most of the postgame pictures.

Many pictures from Saturday that have been posted on social media share a similar view of the team in celebration.

Assistant coach Lisa Covington and Flowers bracket the back row of underclassmen that will look to keep the winning tradition going in the years ahead.

The trophy sits front and center in the dirt — a golden softball player on one side of the plaque and a stuffed squirrel on the other.

Behind it kneel four seniors. Their faces are red with happiness and their uniforms are filthy and even ripped in some spots.

Their smiles are so real, so genuine as the cameras crowd around to capture the champs.