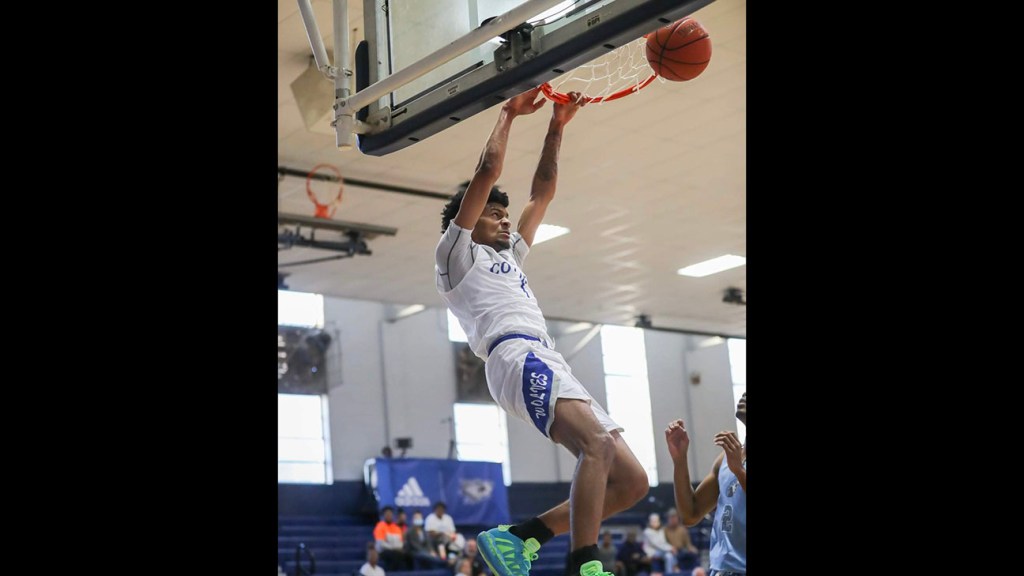 Photo by Co-Lin Sports Info Brookhaven High alum Jermario Hersey rattles the rim for Co-Lin Friday against Southern-Shreveport. Hersey and the Wolves will next play on Jan. 3 when they host Baton Rouge CC at 6:30 p.m.

The Copiah-Lincoln basketball teams have headed to their respective homes to celebrate the Christmas holidays, but before doing so the Wolves took a pair of wins over visiting Southern University-Shreveport last Friday in Wesson.

League action starts back up for the team on Jan. 6 when they travel to play at East Mississippi in Scooba. The Lady Wolves are back at home on Monday, Jan. 10 when they’ll host Holmes.

The win was the second of the season for Young’s team over SUSLA, they beat the Lady Jaguars 73-26 on Nov. 11 in Shreveport.

Freshman guard Tandria Minor led Co-Lin with 23 points in the win. Minor, a 5-foot-3 point guard from Brandon High, is averaging 10.4 points, 3.3 rebounds and 2.3 assists per game for CLCC.

Prior to the season the women’s college 3-point line was moved back to 22 feet, 1.75 inches. The old line had been set at 20 feet, 9.0 inches. The men’s game in college basketball made the same change two years ago and moving it back on the women’s side also aligns it with the distance that teams shoot from deep in the WNBA.

Finding points from behind the new line has been a struggle at times thus far for Co-Lin. Minor (1-of-3) and Edwards (3-of-7) are the only two players who made one from deep for Co-Lin on Friday as the team finished 4-of-13 from behind the line.

Sophomore Aniya Sanders (Warren Central), the leading returning scorer on the team, chipped in 19 points and 10 rebounds in the win. Sanders finished 5-of-11 from the free throw line as the team ended up going 14-of-25 overall from the charity stripe.

Sanders is averaging 14.9 points and 8.0 rebounds thus far in her sophomore campaign. Sophomore guard Marvia Spann of Germantown High and sophomore forward Jakiylah Esco of Ridgeland round out the CLCC starting lineup. They scored eight and two points each respectively against SUSLA.

Freshman Christina James (Jefferson Davis County) added nine points and 10 rebounds off the bench in 20 minutes of action for Co-Lin.

The men’s game was a closer affair, but Co-Lin never trailed on the way to a 91-82 win. The victory puts Co-Lin at 3-6 on the season for first year head coach David Sanders. The first meeting between the schools was a similarly high scoring contest that Southern-Shreveport won 96-92 on Nov. 11 in Louisiana.

The Wolves have shown an ability to get up and down in their first nine games under Sanders, as they’ve topped 90 points on three occasions and only failed to score at least 75 points in two games.

Sophomore guard Lerenzo “Trey” Fort III (Florence High) led Co-Lin with 29 points in the win. Fort went 3-of-10 from behind the 3-point line against the Jags and is averaging 29.3 points per game to lead the Wolves this season.

A 6-foot-7 product of Terry High, Warnsley has shown great improvement this season by averaging 14.5 points and 7.5 rebounds per game. He’s already been named MACCC Player of the Week once this season, an honor also captured once by Fort as well.

Last season Warnsley averaged 5.2 points per game in 12 minutes of action per night. Friday both he and Fort played 30 minutes each for Sanders.

KeDarius “Squirt” Stampley (Natchez HS) added 10 points in 10 minutes off the bench for Co-Lin. Stampley is a transfer from Pearl River CC.

The Wolves are 0-1 in MACCC play after losing 106-93 at Southwest on Dec. 2. Co-Lin led big early and 58-48 at halftime before Southwest sprang a comeback.

The CLCC men’s team will start the new year with a pair of home games as they’ll host Baton Rouge CC on Monday, Jan. 3 for a 6:30 p.m. tipoff. Co-Lin is then back at home hosting East Mississippi on Jan. 6 for a league game that starts at 6 p.m.