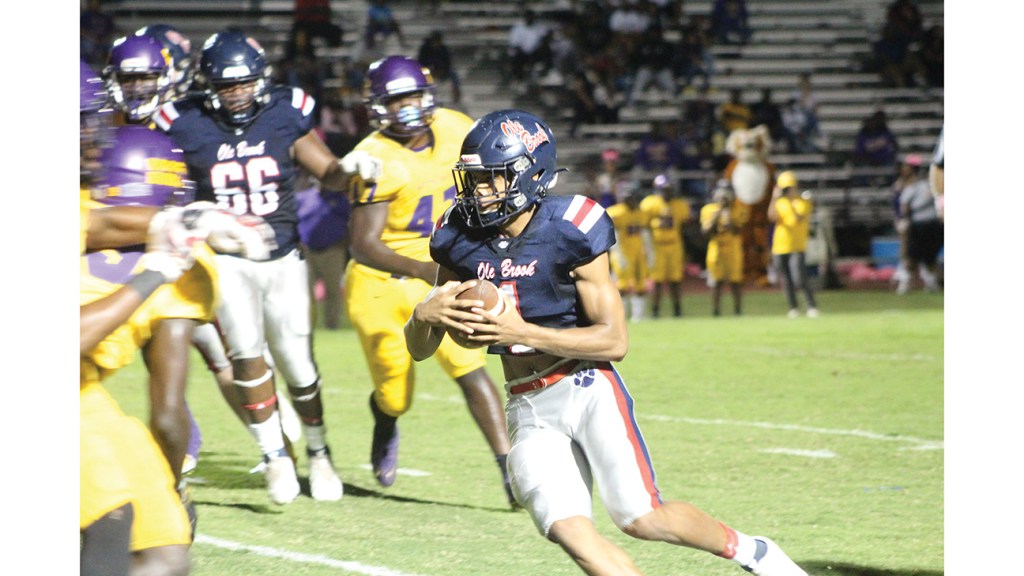 Photo by Cliff Furr Senior quarterback Dre Ross cuts back for what would be a first quarter touchdown run as Brookhaven High got a huge region win over Hattiesburg Friday.

It was a wild one Friday night on King Field, but in the end — it went down as a win for the Brookhaven High Panthers 33-14 over the visiting Hattiesburg High Tigers.

BHS and coach Tucker Peavey jumped out to a 20-0 halftime lead over the visitors from the Hub City.

The Panthers were dominate early. A 13-yard touchdown run by senior quarterback Dre Ross got BHS on the board on the second Panther drive of the game.

Ole Brook had a short field on the drive as a Hattiesburg punt barely traveled 20-yards on the possession prior to the score.

300-pound senior defensive tackle Caleb Harris came in as a fullback and helped plow the way for a short Xavier Gayten touchdown run late in the first quarter as BHS went up 14-0.

Harris and the Ole Brook defense were causing havoc for the Hattiesburg offense as they sprinted to the ball with numbers in the opening half.

As good as the lead felt to the BHS faithful that filled King Field, it also felt like points had been left on the field by the Panthers as a fumble and an interception both came inside HHS territory and stopped the game from becoming a blowout.

The third quarter was all Hattiesburg as the Tigers and coach Tony Vance cut the lead to 20-14.

On the night where BHS honored senior members of the football team, cheer squad, band and JROTC team it was less than ideal for Ross leave the game in the third quarter with an injury.

The senior quarterback plays situational defense for his team and went out after a big collision that took place on a Hattiesburg scoring drive.

Gayten slashed through the Hattiesburg defense all through the first half and took over at QB when Ross went down.

That didn’t last long though as Gayten was injured too. Freshman Mason White took over at QB1 and was joined in the backfield by 5-foot-9, 180-pound running back Da’Shawn Wilson.

With 1:13 remaining in the game, Wilson scored on a 2-yard run that put BHS back ahead by two scores.

The 74-yard drive halted the HHS comeback momentum. Then when the Tigers were in desperation mode, junior Malachi Williams nailed the coffin shut with a 70-yard interception return. It was the second interception of the night for Williams.

“We turned the ball over too much, but what a great night again from our defense,” said Peavey. “They kept fighting and played hard despite having a couple moments when things didn’t go our way to start the third quarter.”

The loss was the first in Region 3-5A play for Hattiesburg. BHS will be back on King Field next week for the final home game of the regular season as Florence visits for homecoming.