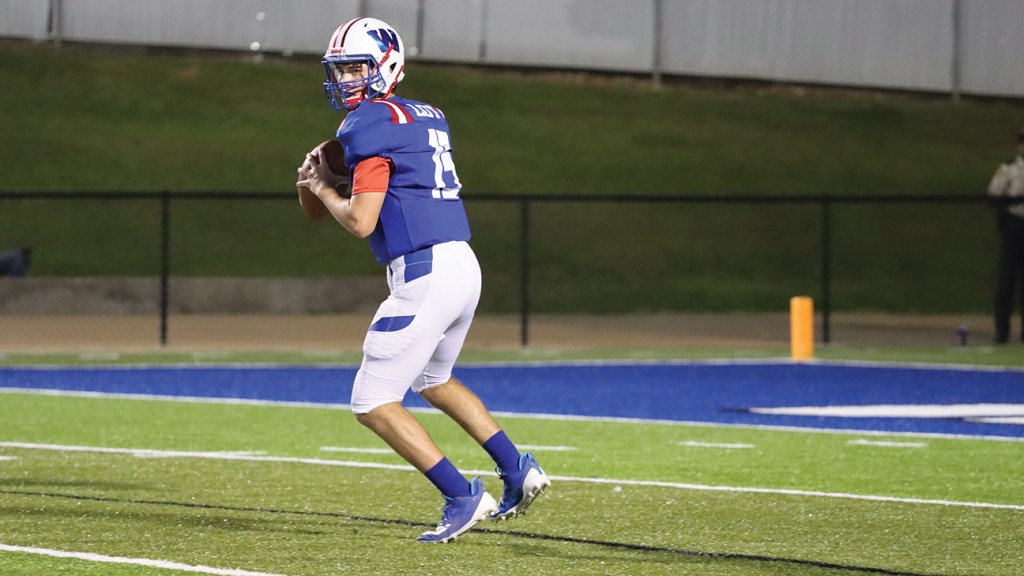 Photo by Lisa Smith Junior quarterback Will Loy and the Wesson Cobras knocked off county rivals Crystal Springs to get their first region win of 2021 Friday on the road.

The Wesson Cobras got their first region win of the season with a huge victory over the Crystal Springs Tigers Friday. Coach Jeremy Loy’s Wesson team made the short trip to CS and jumped up 10-0 after the first quarter.

The Wesson lead was 24-12 going into halftime, but the Tigers responded to cut the lead to 32-26 going into the fourth quarter. The Cobras are now 3-5 on the season and will play at Magee next week.

Coach Anthony Hart’s BA team moved t0 7-2 on the season with a road whipping of the Tigers from Centreville Academy. BA led 10-0 at halftime as the Cougar defense didn’t give up a score until the fourth quarter.

Coming up next is a big, big game for the Cougars as they host Wayne Academy in the regular season finale. Wayne and BA are both 2-0 in division play and the winner of the matchup will win District 4-4A with the MAIS playoffs starting the following week.

Loyd Star saw its perfect start to the 2021 season ended Friday in Ridgeland. It was the second meeting of the season for St. Andrew’s Episcopal and Loyd Star as the teams met at LS in the season opener.

SAE led 14-7 at halftime and then pushed that lead out to 21-7 early in the third quarter. Coach Brian Ford’s Loyd Star Hornets are now 8-1 and still in first place in Region 7-2A with a 2-0 division record. Loyd Star makes the short trip to play at West Lincoln next week.

The Bogue Chitto Bobcats went to Marion County and came back with a gutsy overtime win Friday. Coach Gareth Sartin’s team led 6-0 at halftime and that score held going into the fourth quarter.

The East Marion Eagles tied the game up at 6-6 and that was the score going into overtime. BC got the ball first and got on the board with an Easton Sartin touchdown run and Carson Price extra point kick.

East Marion only needed two plays to score on their OT possession. The Eagles chose to go for the 2-point conversion and the win and were shut down by the Bobcat defense. The Bobcats (6-2) are now 2-1 in Region 7-2A with one division game remaining and close out region play next week by hosting Amite County

The Lawrence County Cougars bounced back from their first region loss of the season to knock off Sumrall on the road Friday. The Cougars trailed 14-6 at halftime before outscoring the Bobcats in the second half.

Coach Jesse Anderson’s Cougars (5-3) are back in Monticello next week hosting Purvis High for another region game.

The visiting West Lincoln Bears had no answers for the Amite County Trojans Thursday in Liberty. A Josh Thornhill field goal was the only score of the night for coach Brad Bland’s Bears. West Lincoln is back at home next week hosting Loyd Star.