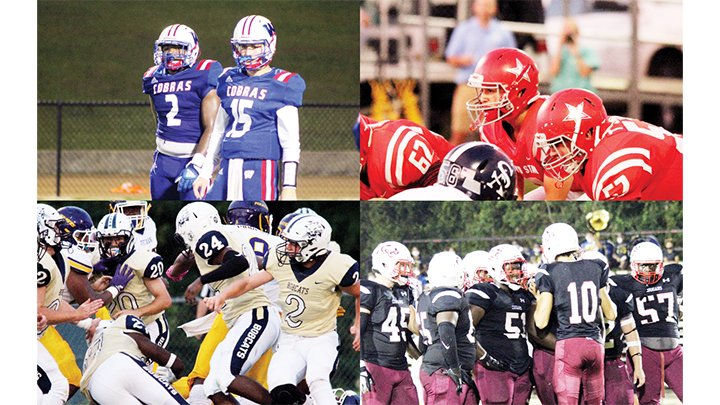 Daily Leader file photo Nearly every high school football team in the area is still fighting for playoff positioning as the regular season concludes this week for MAIS schools, next week for the MHSAA 2A, 3A and 4A schools and in three weeks for MHSAA 1A, 5A and 6A programs.

Here’s a look at what awaits area high school football teams as the regular season finish is within sight.

Expect a huge crowd in the stands Friday and on the hillside that rings R.M. “Red” Stuard Field on the backend of the Brookhaven Academy campus. The school last won a football district championship in 2018 and that’s what will be on the line when the Wayne County Jaguars come to town.

BA sits atop the District 4-4A standings with a 2-0 record while Columbia Academy and Wayne Academy are both 1-1 in division play. Columbia (2-9) pulled a shocker last week by whipping Wayne Academy 36-9. Bowling Green School (0-9) is the fourth member of the division.

Brookhaven Academy (7-2) has won five games in a row including a 31-8 final on the road last week at Centreville Academy while Wayne County is 4-5 on the season. Winning your district in the MAIS gets you a top four seed in the 12-team playoff field and earns a first-round bye.

Adams County Christian School (7-2) — the team that beat BA 46-21 in the season opener — is No. 1 in District 3-4A. Greenville-St. Joe and Marshall Academy of Holly Springs are the two leading teams in the northern districts that will likely earn first round byes as well.

The Jaguars won that game 49-21 before falling 49-14 to Riverfield Academy in the MAIS 4A title game. The 2020 WA team finished 9-4 overall, but head coach Todd Mangum left after last season to take the head job at Simpson Academy.

Marcus Davidson is the new head coach for Wayne Academy and the Jags have played a tough schedule against some bigger programs. Wayne has losses to 5A Simpson Academy (6-3), 5A Park Place Christian, 5A Heritage Academy (8-1) and a 6-3 Winston Academy team that will be seeded in the top half of the 4A bracket.

What isn’t new for Wayne Academy is their quarterback — senior Stone Ross. Ross is electric with the ball in his hands as he ran 25 times for 250 yards last season when WA topped Brookhaven in the playoffs.

A big key for coach Anthony Hart’s defense will be getting hands on Ross early as they don’t want the speedy QB to get into space.

The Brookhaven Academy defense got 11 tackles and an interception from junior linebacker Rayce Stewart in the win against Centreville. Stewart is stepping in at middle linebacker after an injury to senior Trenton Tarver forced the move.

Coach Anthony Hart’s defense held CA to 245 total yards last week and will look for a similar result this week against Wayne.

Hornets in control atop Region 7-2A, Bobcats sit in second

The Loyd Star Hornets and coach Brian Ford have to shake off the disappointment of losing their first game of 2021 last week and refocus on two big Region 7-2A games remaining on the schedule.

Last week Loyd Star lost 35-29 on the road at St. Andrew’s. It was the second meeting of the season for the teams as Loyd Star beat SA in the season opener on Aug. 27.

Loyd Star travels to West Lincoln Friday and then returns home to host Amite County in the season finale on Thursday, Aug. 28.

Region 7-2A matches up with. Region 6 in the first round of the playoffs. Scott Central (8-0) is the top dog in that division, although they’ve yet to play a Velma Jackson (7-1) team that’s also unbeaten in region play.

The No. 3 team is Pisgah (2-6) at the moment and a win this Friday over Pelahatchie (3-5) would cement that position for the Dragons. The No. 4 spot will likely come down to next week’s regular season finale when Pelahatchie plays Puckett (4-4).

It will likely be the winner of that Pelahatchie and Puckett game that will travel to Loyd Star to take on the Hornets in a first-round playoff game if Loyd Star takes care of business to lock up the region title.

The first round of the 2A playoffs begin on Nov. 5 and Bogue Chitto is aiming to host a game on that date too as the Bobcats are close to locking up the No. 2 seed in the region.

Next week the Bobcats are on the road in a non-division game for their regular season finale at Franklin County on Thursday, Oct. 28.

If Pisgah does take third in Region 6-2A and the Bobcats finish as the No.2 seed in Region 7, a first-round matchup between the schools would be a rematch of their season opener played at Bogue Chitto. The Bobcats topped the Dragons 42-20 that night on Troy Smith Field.

Panthers have plenty to play for over final three weeks

The 5A regular season still has three weeks remaining and Brookhaven High School has lots to play for in those three games.

The final regular season home game for coach Tucker Peavey’s team is this week against Florence High (1-5) in a homecoming matchup on King Field.

The Panthers then take to the road to face Natchez (3-5) and South Jones (2-5) in the two following weeks.

West Jones and Wayne County are both 4-0 in Region 3-5A play while Hattiesburg and Laurel High are both 3-1. Each of those loses for HHS and LHS were to Brookhaven High though.

The Panthers are 2-2 after facing the top four teams in the region. They lost 26-0 to West Jones and 20-14 in overtime at Wayne County.

Wayne County is the team that BHS is chasing, and the War Eagles have Hattiesburg to play this Friday along with games in the following weeks against Laurel and West Jones.

The No. 2 seed and a home playoff game are a real possibility for BHS, but first the team must take care of business over the next three weeks.

Florence is a first-year division member after moving up from 4A. The Eagles are coached by former Southern Miss linebacker Rod Davis.

Win for Wesson over Crystal Springs puts Cobras in contention

Wesson coach Jeremy Loy and his team have battled through adversity all season in their first year back in the 3A classification.

The Cobras got the type of win that makes all the work worth it last week when they beat Crystal Springs 48-32 on the road.

That win was the first Region 6-3A victory of the season for the Cobras and put them in the driver’s seat for the No. 4 seed and a playoff berth.

Raleigh is the top team in the region after beating Magee 28-13 last week. Then come the Trojans from Simpson County and Hazlehurst.

Wesson has a road game this week at Magee and then close the regular season out with a home game against McLaurin (2-6).

The No. 4 seed would put Wesson on the road at Tylertown in the first round of the playoffs. The teams met to open the season in Wesson and the Cobras built a 30-6 lead before THS came roaring back for a 46-30 victory.

If Lawrence County and coach Jesse Anderson are going to host a 4A playoff game they’ll need to do something that no other Region 7 team has done this season — beat Columbia High (7-1).

That matchup will take place in Columbia next week, first though the Cougars (5-3) play their home finale against Purvis (1-6).

The region champion will also be decided Friday when Columbia travels to face Poplarville (7-1) in a highly anticipated matchup.

Region 7-4A matches up with Region 6 in the first round of the playoffs. North Pike (7-0) and Raymond (7-1) are the top teams in Region 6 as both are 3-0 in division play. They’ll hash out who finishes in first when they meet on Friday.

If LC finishes third in the division, they’ll likely head to the loser of the NP and RHS game in the opening round of the playoffs.

Enterprise and West Lincoln want to end with wins

The playoffs are still a possibility for West Lincoln and coach Brad Bland. Despite a record that sits at 0-7 on the year, the Bears have a home game this week against Loyd Star before closing the year out at East Marion on Thursday, Oct. 28.

The Bears have played their best football on Perry Miller Field this season and have seen multiple close games go against them there. St. Andrew’s squeaked out a 21-19-win, Bogue Chitto put away a 17-6 victory late and East Rankin Academy scored with less than a minute remaining to earn a 20-14 decision.

The Bears won a close one 28-26 last season over the Hornets and are looking for a third straight win against their county rivals from LS.

As a 1A school, coach Trey Woodard and his Enterprise Yellow Jackets have three more regular season games remaining. Friday the Jackets (3-5) will hit the road to face the defending 1A state champion Lumberton Panthers (4-3).

Resurrection Catholic (4-3) comes to Harry Cole Field on Oct. 29 for the final home game of the season at Enterprise. The following week EAC ends the season with a trip to face Mount Olive (4-3).