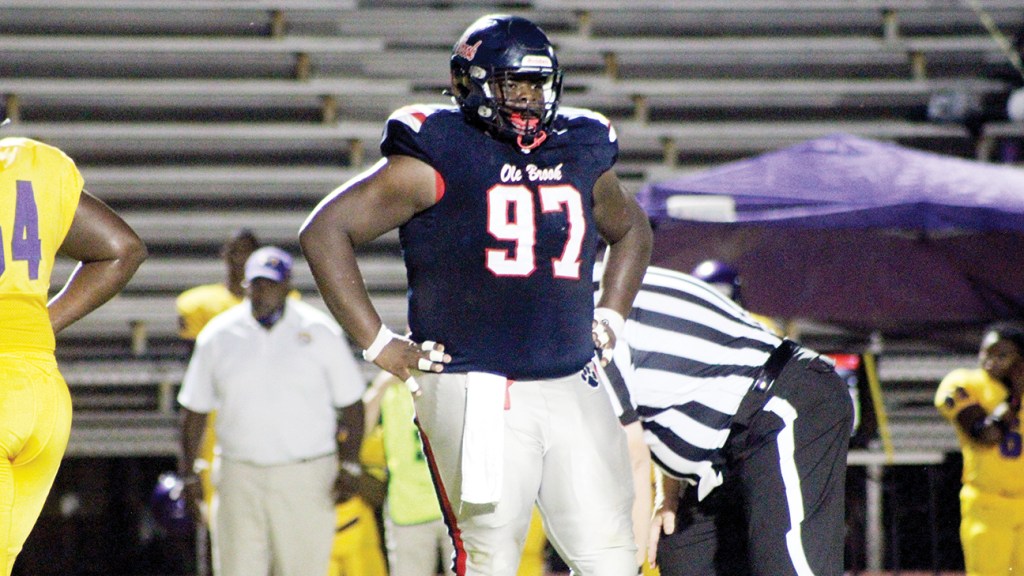 You hear the phrase bandied about on sports talk radio or as a form of coach-speak, but what does it mean to be a game changer?

For a high school defender, being a game changer means that the opposing coaches are thinking about you on Sunday afternoon when they won’t see you on the field until Friday night.

Being a game changer means the offense wants to go where you aren’t and force other players on the team to step up.

Senior nose tackle Caleb Harris is a game changer for the Brookhaven High defense. In a 33-14 win against Hattiesburg High last week, Harris was more than the Tigers could handle up front. He made eight tackles, including a sack, to earn The Daily Leader Defensive Player of the Week honors.

You don’t need binoculars to see Harris from the top of the stands at King Field. No. 97 is 6-foot-3 and weighs around 350-pounds.

What you do need to watch closely is what Harris does with that size. He’s not some big body that runs into the nearest blocker like a magnet.

The opening drive always tells the story as the other team’s offensive line is caught off guard with how fast Harris moves. He fires off the ball, stays low, fights off hands that try to grab him and appears in the backfield to chase a quarterback or wrap up a running back.

Against Hattiesburg the Panthers went with their jumbo package and placed Harris at fullback. He bulled a defender into the end zone as sophomore Xavier Gayten went off his hip for a 3-yard score.

The BHS defense has gelled this season to become a force for coordinator Corey McLaurin and head coach Tucker Peavey.

The Ole Brook-D held Laurel to 12 points, Wayne County to 20 in an overtime loss and only allowed two third quarter scores by Hattiesburg.

Hattiesburg had scored 40, 40 and 52 points in their three previous games — all region wins.

The closing speed of the defense, that’s where you’ll most notice the difference between the upper classifications of high school football and most schools at the lower levels.

You think a hole is appearing at the line and then a West Jones linebacker or Wayne County lineman appears in an instance to make the play to close out the space.

BHS has a band of closers this season and the Panthers are reading, reacting and swarming to the ball to slow down their opponents.

The fly around the field like asteroids — increasingly fearless in their pursuit and ready to lay out while making a tackle.

In the center of the BHS asteroid field isn’t the sun or Earth or other planet — it’s big no. 97 — making offensive coordinators adjust their gamelans every week.