Roundup: Jackets knock off 1A champs, Hornets lock up 1st seed in 7-2A 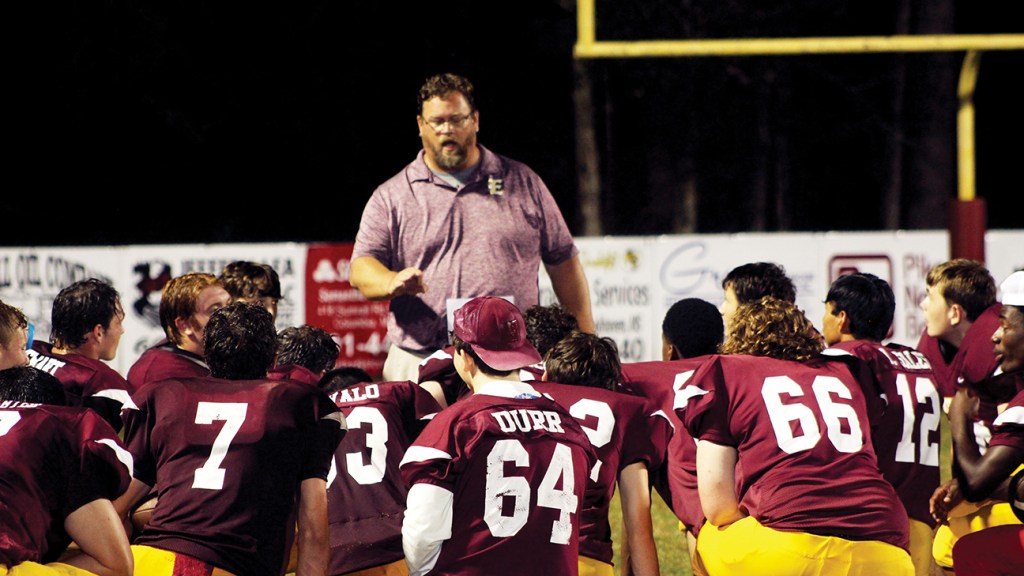 Photo by Cliff Furr Enterprise head coach Trey Woodard and his Yellow Jackets knocked off defending 1A state champion Lumberton 52-38 at home Friday in a great win for an EAC team that has 16 freshmen on its roster.

Coach Trey Woodard and his Enterprise Yellow Jackets went on the road Friday and brought back home one of the greatest wins in program history. Vegas would have tabbed the Jackets as heavy underdogs when they faced the defending 1A state champion Lumberton Panthers.

That’s why they play the game though as the Yellow Jackets (4-5) got an unforgettable win over the Panthers (4-4) who are among the best small school programs year-in and year-out.

Lumberton led 20-16 after one quarter and 26-24 at halftime, but the second half was all EAC as the Jackets had staked a 40-32 advantage by the end of the third quarter.

Enterprise returns to Harry Cole Field next week to host Resurrection Catholic in another Region 4-1A game.

The Loyd Star Hornets wrapped up the Region 7-2A championship Friday in a closer than the score looks win at West Lincoln. A large contingent of LS fans made the short drive down Jackson Liberty Road to see their Hornets (9-1) take on the Bears (0-8).

“We gave them some great field position early and you can’t do that against a team with a running back as good as Enrico Price (WL senior RB),” said Loyd Star head coach Brian Ford. “It was a great job by guys to buckle down in the second half and correct the mistakes we’d made earlier.”

Loyd Star closes the regular season on Thursday, Oct. 28 with a game at home against Amite County. The Hornets know they’ll host a playoff game on W.E. “Sambo” Smith Field when the 2A postseason begins on Nov. 5. At the moment it looks like Pisgah is the likely opponent in that first-round game.

Coach Brad Bland and the West Lincoln Bears wrap up their season next week with a Thursday trip to face East Marion on the road.

The Bogue Chitto Bobcats (7-2) cemented themselves as the second-place team in Region 7-2A with a dominating win on Troy Smith Field against Amite County. BC led 10-0 at halftime as the Bobcats are getting fully healthy at the right time of the season.

Bogue Chitto and coach Gareth Sartin play a non-region game at Franklin County on Thursday in the regular season finale. The first-round playoff game on Nov. 5 will likely be against Pelahatchie if the Region 6-2A standings hold up.

A running clock in the second half made quick work of homecoming Friday on King Field for a packed crowd of Panther fans. BHS led 35-0 at halftime as they moved to 3-2 in Region 3-5A play.

The game was the final home game of the regular season for BHS as the Panthers have two big games remaining at Natchez and South Jones.

Brookhaven High also got some help in their quest to finish second in the division as Hattiesburg High beat Wayne County 14-13 Friday to give the War Eagles their first region loss of the season.

The Cougars closed out the home portion of their schedule with a dominating win over the visitors from Lamar County Friday in Monticello. Coach Jesse Anderson and his Cougars are 6-3 on the season and firmly in third place in Region 7-4A.

LC goes on the road to play the region leading Columbia Wildcats Thursday. Columbia whipped Poplarville 27-3 in a game Friday between two teams that came in without a region loss.

The defending 3A state champions from Magee raced past Wesson (3-6) Friday in Simpson County. Wesson closes their regular season Friday by hosting McLaurin in Stone Stadium and can seal up a playoff berth with a win over the Tigers (2-7).