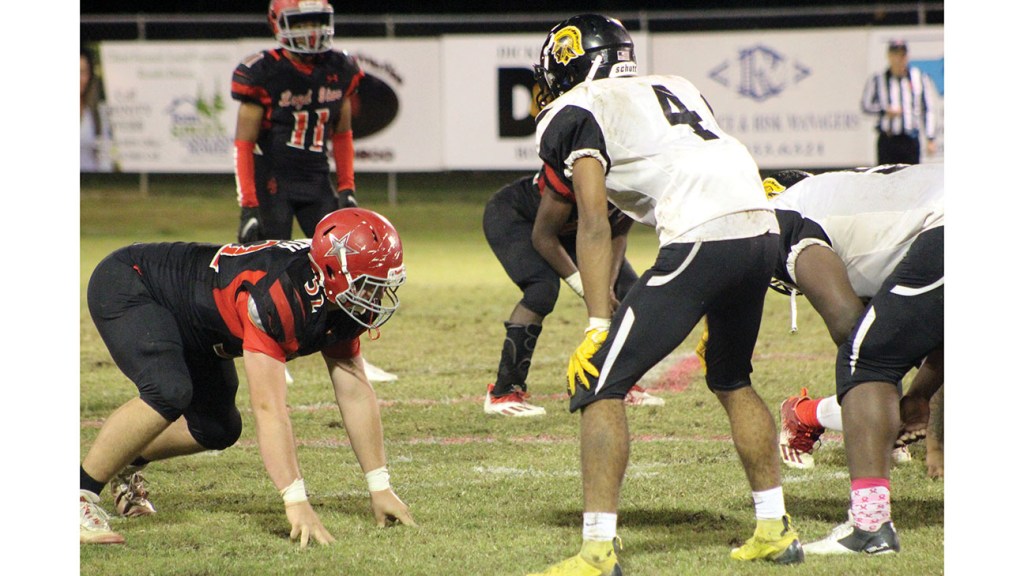 On a hot Friday evening in late August the football season for Loyd Star began with a 26-23 overtime win against St. Andrew’s.

That night it was a sliding catch by junior Bryce Ford in the west endzone of W.E. “Sambo” Smith that set off a full-throated celebration from the LS fans, coaches and players.

An extra point kick by sophomore Cooper Reid split the uprights in that same endzone to give Loyd Star a 41-40 overtime win over the visiting Trojans from Liberty Thursday.

In between those two overtime wins, Loyd Star has had a season to remember in Hornetville. The team is 9-1 on the field in 2021 with only a road loss at St. Andrew’s — the teams played a home and home series this season — marring their record.

Win or lose, the Hornets had already wrapped up the Region 7-2A title before Thursday night. Still, LS coach Brian Ford and his team wanted the momentum of going into the playoffs next week with a win.

The Hornets also wanted to finish with a 4-0 record against their Region 7-2A foes and Amite County was the last box to check on that list.

Anyone who thought it would be easy when looking at Amite County’s 3-win record saw early that the Trojans were a more dangerous team than that.

One thing that’s plagued Loyd Star this season at times is ball security. That theme recurred Thursday as the Hornets lost three fumbles in the game.

Loyd Star almost had one more turnover and the recovery of that fumble might have been the biggest play of the game.

A pass from LS QB Carter Holcomb to senior Versie Wilson got the Hornets down to the AC 1-yard line. It appeared that Wilson fell into the endzone on the catch, but the referee ruled his knee was down before the goal line.

Fifty-three seconds remained in the game and the Hornets trailed by seven. On the first play from the 1-yard line, the ball hit the ground and was fallen on by freshman running back Omarion Clay for Loyd Star.

If Clay doesn’t react quickly enough and AC gets that turnover, the game would have been over. Loyd Star would have still won the division and hosted a playoff game on Friday, but nobody wearing red would have went home happy.

Clay made sure that didn’t happen though and on the next play sophomore fullback James Goodwin went around the left end for the score with 24 seconds left. Reid hit the PAT attempt after a timeout had Amite County thinking that Loyd Star might go for a 2-point try and the win.

The home team won the toss to start overtime and went on defense first. On the first Trojan play of the extra period sophomore running back Murkelin Thompson rumbled in for a touchdown. Thompson checks in at 5-foot-11, 230-pounds and looks like the definition of the word stocky.

AC isn’t a team that can or will kick extra points though and the Hornets stopped them on the conversion attempt to set up Reid hitting the game winner.  The Trojans had appeared to gain the 2-point try on their first attempt, but a holding play reset and moved the ball back out of running range for the ground-based offense.

All it took was one Julius Smith rush for the Hornets to pick up five yards on the first play of their possession. Goodwin plowed forward for a score on the next play from the five-yard line and AC coach Reginald Lumpkin tried to ice the LS kicker Reid with a timeout, but it didn’t matter.

“We told our guys at halftime that no matter what happens, stay on an even keel,” said Loyd Star coach Brian Ford. “We didn’t panic when we got down late, and we played well enough when it counted to overcome those earlier mistakes.”

Smith scored a fourth quarter touchdown to put Loyd Star up 27-26. Amite County then fumbled an option pitch and LS defensive back Caleb Smith dove in for the fumble recovery on the Trojan 37-yard line.

With just seven minutes remaining in the game, it felt like the Hornets might be about to bag up the win.

AC got the ball right back though when they stripped the ball from Smith on a play that had the fans wearing red seeing red too. It appeared that Smith was well in the grasp, but no whistle came and as the play dragged on, an Amite County player ripped the ball away from Smith.

Amite County quarterback Kobe Johnson then made the Hornet defense think he was going right before peeling back to the left and running untouched for a 25-yard score with 3:29 remaining in the game after the turnover.

The 2-point conversion was good to put AC ahead 34-27 before the Loyd Star game-tying drive.

It was the second region title for the Hornets under Ford who’s in his fifth year at the school.

Wilson says Ford and his coaching staff had the team ready to play, despite the self-inflicted mistakes that made the game close.

“We had a good game plan and a good week of practice,” said Wilson. “We made some adjustments at halftime they worked. We didn’t panic when they went up, we knew we’d go back down and score — we didn’t get our heads down.”

Junior lineman Ethan Greer went down in the game for Loyd Star with a lower leg injury and junior running back Bryce Ford wasn’t available after getting injured against West Lincoln last week.

The Hornets will hope to be as healthy as possible Friday when they return home for an MHSAA 2A playoff first round game. They’ll face the Pisgah Dragons (3-7) for a 7 p.m. kickoff Friday.