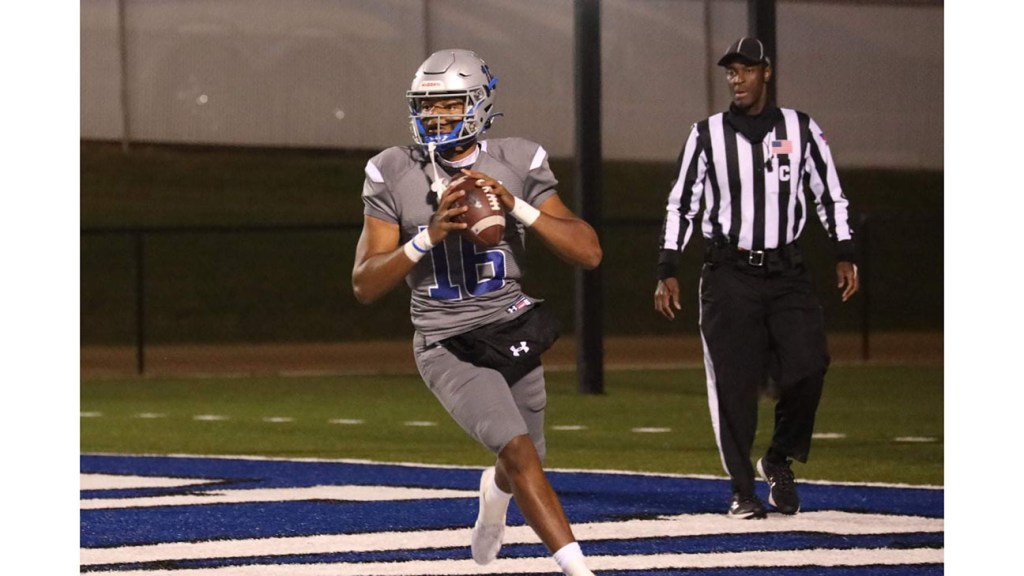 Photo by CLCC Sports Info Co-Lin sophomore quarterback Paul Hargrave rolls out on a passing play Thursday for the Wolves against Jones College.

The 2021 football season came to an end Thursday for the Co-Lin Wolves with a 21-7 homecoming loss to Jones College.

Maybe it was the cold that made hands numb and holding on to the ball difficult because both teams struggled to maintain a grasp at times.

Jones fumbled in the first quarter on a punt return and Co-Lin took over on the JC 21-yard line. The following CLCC drive went for a negative four yards and a field goal attempt was blocked by the Bobcats.

Markel McLaurin returned the blocked kick down to the CLCC 5-yard line, setting up what would surely be an imminent Jones score.

The Co-Lin defense stiffened though and forced a turnover on downs four plays later.

At the beginning of the second quarter the Bobcats drove down to the Co-Lin 5-yard line once again. Just like they did before, the Wolf Pack defense pinned their ears back to force another turnover on downs.

The first half ended in a 0-0 tie and Co-Lin punter Bryce Lofton was easily the MVP of the opening two quarters. Lofton had one punt go for 66 yards, another that went 59-yards and a third that traveled 60-yards.

CLCC received the ball to open the second half and sophomore quarterback Paul Hargrave (Natchez HS) threw an interception that led to the first Jones touchdown of the night on a 33-yard pass play that game on a 4th-and-4 for the Bobcats.

After another Lofton punt, the Jones offense only needed one play to find the endzone again as QB Quaterius Hawkins found Bud Tolbert on a 60-yard touchdown pass.

That precede the best Co-Lin drive of the night that covered 73 yards in six plays. Hargrave hit Tyquan Henderson (Canton HS) on a 5-yard touchdown pass to pull his team within 14-7. Henderson had a 64-yard gain earlier on the drive to set up his score.

A Jones score on the first play of the fourth quarter put the Bobcats back out ahead by two scores as two turnovers in the final period nulled any hopes of a comeback for the Wolves (3-6).

Co-Lin generated just 186 yards of total offense in the loss.

Jones (8-1) took first place in the MACCC South Division with the win, despite losing 27-23 last week to Mississippi Gulf Coast.

The winner of that game will meet the winner between No. 1 East Mississippi (9-0) and no. 11 Hinds (7-2) in the MACC State Championship.