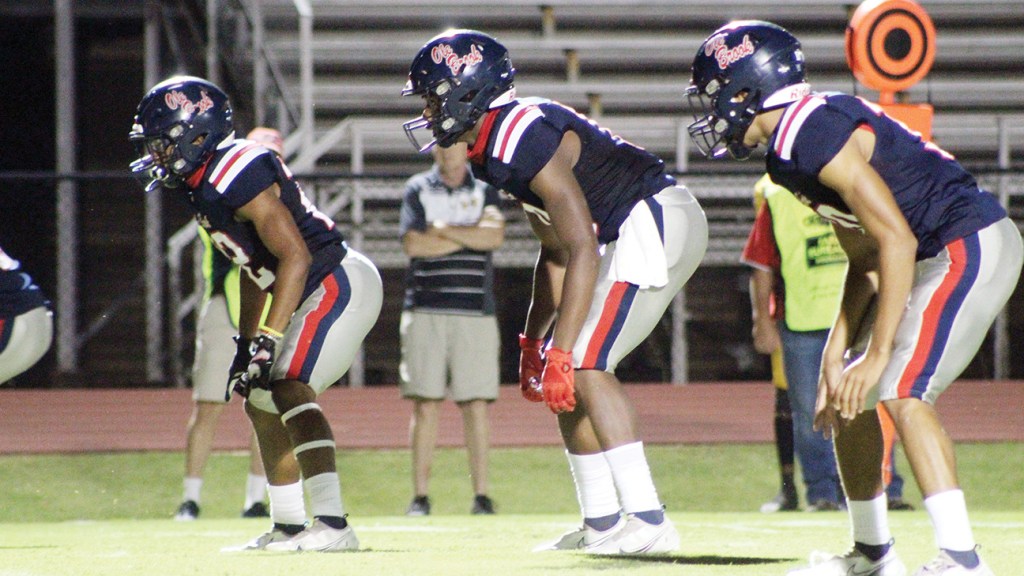 Photo by Cliff Furr The Brookhaven High Panthers know they’ll play in the MHSAA 5A playoffs next week, but won’t know where or against whom until Hattiesburg and Laurel meet on Saturday night in Jones County.

A monster night by sophomore running back Xavier Gayten helped Brookhaven High put a bow on the 2021 regular season with a big road win Thursday in Ellisville over South Jones.

Gayten carried the ball 17 times for 206 yards and four touchdowns.

Senior Javonta Stewart caught a TD pass and also snagged an interception for BHS. Quarterback Dre Ross passed for a score and ran for a score as well.

Senior Marvis McDaniel recovered a fumble for BHS and sophomore Jimmy Johns Jr. made a team high five tackles — two for a loss — for the Panthers.

Sophomore kicker Bryce Smith went 6-of-6 on PAT attempts and also made a 37-yard field goal for Ole Brook. Smith’s one punt of the night netted 57 yards and was also downed inside the 20-yard line.

BHS now can only wait as their playoff seeding won’t be determined until a winner is declared between Hattiesburg and Laurel in a game scheduled for Saturday night. A win by Laurel in the 100th meeting between the rivals for The Little Brown Jug would give BHS a home game next week in the MHSAA 5A opening round.

Hattiesburg can gain second place with a win, forcing BHS to play on the road next Friday.

The Pisgah Dragons ran out to a 19-0 halftime lead Friday that Loyd Star could never overcome in their MHSAA 2A first round matchup.

The win moves the Dragons (4-7) on to the second round to face Newton High (8-3). Loyd Star coach Brian Ford and his team finish the 2021 season with a 10-2 record and were Region 7-2A champs for the second time in four years.

Pelahatchie never trailed Friday as they took a 26-7 lead into halftime over Bogue Chitto in the MHSAA 2A first round game. The Bobcats and coach Gareth Sartin finish the season with an 8-3 record.

The Chiefs (6-5) will be on the road in the second round playing at Philadelphia High (5-6).

The homestanding McComb Tigers were able to outlast Lawrence County Friday night in an MHSAA 4A first round game. LC led 14-12 at halftime.

McComb (5-3) will meet Mendenhall (8-3) in the second round while Lawrence County and coach Jesse Anderson end the 2021 season with a 6-5 record.

In a Thursday season ender for both teams, it was the Mount Olive Pirates (6-4) who took a 20-point win over the visiting Enterprise Yellow Jackets (4-7).

The Tylertown Chiefs (11-0) remain unbeaten after racing past Wesson Friday in a MHSAA 3A first round playoff game.

The Cobras (4-6) and coach Jeremy Loy trailed 26-6 at halftime. Tylertown will next meet Union High (5-6) in the second round.