3-peat complete! Panthers reign as 5A XC champs once again 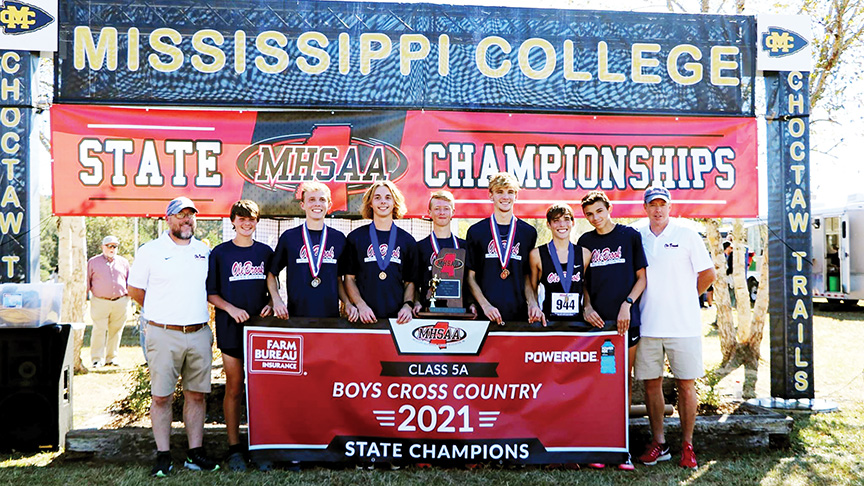 Choctaw Trails in southwest Jackson is the home course of the cross-country programs at Mississippi College.

It’s also a home away from home for the Brookhaven High Panthers.

Monday, running in front of a big crowd of supporters who made the trip to see the mid-morning race, the Panthers made one more podium appearance at Choctaw Trails as they won a third-straight MHSAA 5A State Cross-Country championship.

It was the fourth state title for the program in the last five years.

The Panthers were heavy favorites to win this race before the season ever began. The team has a group of five senior leaders that run at the front of every meet they enter.

Monday, those five produced in their usual fashion. Grayson Childress won his first ever 5A individual state championship with a time of 16 minutes and 12 seconds.

Following Childress were three of his teammates in second, third and fourth place. Sam Arnold finished in the silver medal position with a time of 16:38 and Jake Thompson was the bronze finisher in 16:48. Trey Knott, son of BHS cross-country coach Shannon Knott, finished fourth in 16:59.

In the 2020 championship race, Childress was runner-up, Arnold finished fourth, Knott ended up sixth and Thompson was the eighth-place finisher.

Kellum finished with a time of 17:42, 14 seconds faster than the time he posted as a junior at the state meet. All five of the seniors improved on their championship times from last year as this season has been one filled with personal best performances throughout the team.

The 12th place finish by the consistent Kellum was huge for BHS in holding off their rivals from Saltillo High in the team standings.

Childress finished third overall as a freshman in 2018 and then as runner-up as a sophomore and junior to Christian Balcer of East Central High.

In his varsity career he’s won four fistfuls of first-place medals at races held all over the state.

Hearing his name called as the top-runner at his last high school meet was a storybook ending for Childress.

“An article I read reminded me that I’ve finished runner up five times on the state level between the cross-country and track seasons,” said Childress. “It was awesome to finally get the big one. All the races I’ve won have been great, but this was definitely the one I wanted to win.”

Running on a course that they now know like the back of their collective hands, there’s still nerves — even for seniors — when approaching the start line.

“It’s not always having nerves of whether we’ll win or not,” said Arnold. “It’s more wanting to perform to a certain standard that we set for ourselves.”

“Saying I’m proud of this group of boys is definitely an understatement,” said Shannon Knott. “What this group of five has achieved this year will cement them as one of the best cross-country teams to ever run in the state of Mississippi, regardless of classification.”