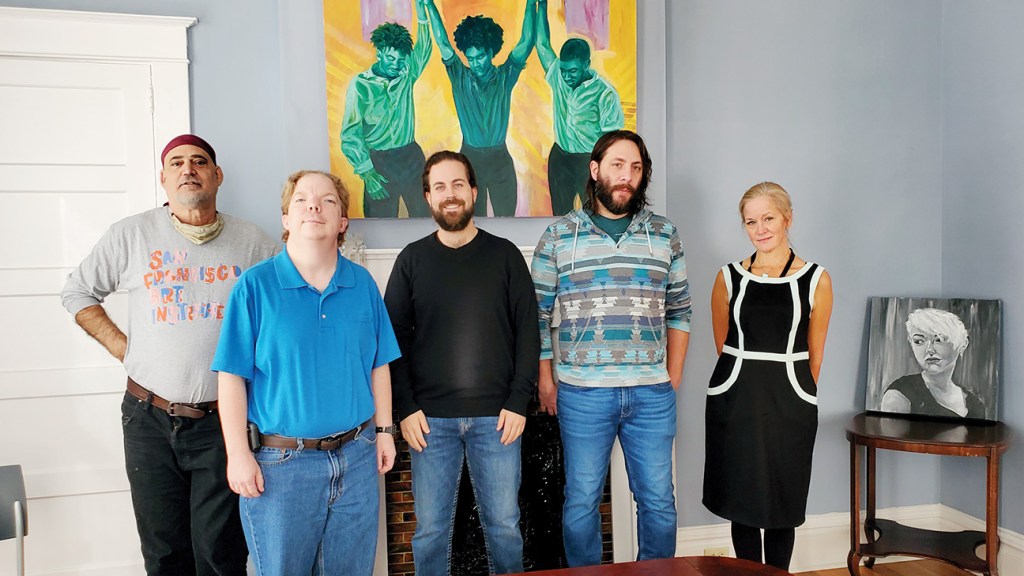 Photo by Brett Campbell Christopher Coppola, professor at San Francisco Art Institute, has partnered with the Mississippi School of the Arts on a series of short films based on lessons learned from “A Tale of Two Cities.” From left, Coppola, MSA film instructor John Kelley Shelburne, and SFAI students Nicholas Dauphinais, Patrick Kelley and Katalina Prince.

Hollywood director, producer, writer and actor Christopher Coppola has a “Tag, you’re it” approach to teaching.

The nephew of famed director Francis Ford Coppola, and older brother of well-known actor Nicholas Cage, is a professor at The San Francisco Art Institute, a junior- and senior-only arts college.

Coppola has been in Brookhaven this week as part of a collaborative project with Mississippi School of the Arts instructor John Kelly Shelburne and MSA students. Joining Coppola were three of his SFAI students, multi-media artist Katalina Prince, musician and film student Nicholas Dauphinais and painter Patrick Kelly.

Coppola had completed a project with his SFAI students that involved taking a new look at the 1605 book “Don Quixote” by Miguel de Cervantes, and retelling its themes in a way that impacted modern audiences.

“They spent one semester in studying Cervantes the man, the book itself, the history of the time period, and a second semester where the students worked to answer how you make that relevant for today,” Coppola said. “It’s important to know the relevance. It’s about mental health and the stigma.”

The project — which involved taking stories from multiple students and weaving them into a final, professionally-made film — went so well, Coppola was eager to repeat the process. He chose Charles Dickens’ classic “A Tale of Two Cities,” and had the concept of working with the settings of San Francisco and a city in Mississippi.

“I love Mississippi. I love the South,” Coppola said. What began with an acting part in Biloxi and the welcome he and his family felt in the state led to a love for the area and a desire to do more work in the Magnolia State.

He searched for a good locale and was happy to discover a School of the Arts, even though MSA is a high school and SFAI is a college. Coppola thought it would work well, and it has.

His approach has been for the students at both schools to read and study Dickens’ work and then express the themes of racism, fear, injustice, corporate takeovers, gentrification and balkanization in comparison to poetry, music, art and storytelling.

“My uncle, Francis, would say, ‘The job and purpose of cinema is to convince people that the world they live in is not the only one available to them,’” Coppola said.

Helping students to question what they see and experience and then use their art to express that is his method of teaching — taking what you know and sparking or inspiring another artist to create. “It’s ‘Tag, you’re it.’”

MSA students will travel to San Francisco next week to complete the “Tale” project with final filming. MSA’s Shelburne is excited for his students to experience this part of the work.

“With high schoolers working with college students, they’re stepping outside the box,” Shelburne said. “MSA is challenging them to think deeper about their projects — what is the form or purpose of this scene? What is the message you’re wanting to get across? We want audiences to think.”

Students are utilizing their intellects to express their art and Shelburne said that’s exciting for him to see as an instructor.

“We’re in such a divided country right now,” said SFAI student Dauphinais. “This story really relates because it bridges our humanity. We’ve tried to capture some of that while we’re here.”

“We have an age difference working with the MSA students, but the attitude of place and goals they have is really rewarding,” SFAI student Kelley said. “We have an open dialogue through art.”

“In studying Coppola’s approach to story craft we see the value of finding past and present be hopeful and there’s a timelessness in connection,” said SFAI student Prince.

“The stories are all about how we treat one another,” Coppola said. “We are all human, regardless of politics or differences of opinion. We should see each other and treat each other as human.”

When the “Tale of Two Cities” project is completed, Coppola said it will be presented as a documentary of how the project was done, followed with the film made with all the students’ contributions. It will premiere simultaneously with live audiences and online streaming at SFAI and MSA.