Panthers surge into 5A second round after dominating East Central 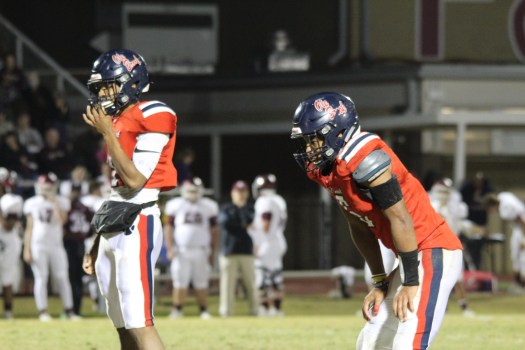 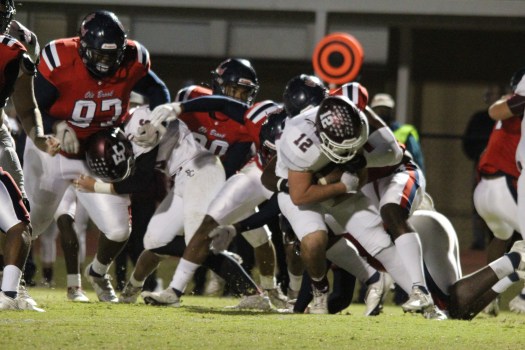 Senior lineman AJ Robinson swarms to an East Central ball carrier Friday for Brookhaven High in the first half. 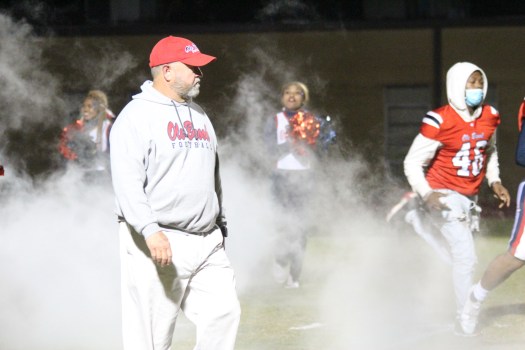 Brookhaven High football coach Tucker Peavey and his Panthers are on to the second round of the MHSAA 5A playoffs after a 42-14 win against East Central Friday.

The Brookhaven High Panthers (7-3) allowed the visiting East Central Hornets (7-4) to hang around in the first half of their MHSAA 5A first round playoff matchup Friday on King Field.

A touchdown on the final play of the second quarter by EC cut the Ole Brook advantage to 21-14 at the break and had the visitors from Hurley thinking about springing an upset on the higher seeded Panthers.

Not so fast my friend — the final half was all Brookhaven as the Panthers advanced to face Picayune High in the second round with a 42-14 win over East Central.

“I thought we played really well other than the turnovers we had at the beginning,” said BHS coach Tucker Peavey. “We kept battling though and any time you win a home playoff game, it’s a good night.”

The duo of senior quarterback Dre Ross and sophomore running back Xavier Gayten were a problem that the Hornets had no answers for.

Gayten ran for 120 yards and one touchdown on 16 carries. Ross picked up 164 yards on the ground and scored three rushing touchdowns on 13 carries.

Ross had some big throws too as he tossed two touchdown passes — both going to senior wideout Javonta Stewart.

As good as things were late for the Panthers, the start left something to be desired.

After the Panther defense forced a 3-and-out on the opening drive of the game, BHS took over in great field position when Markel Smith returned a punt down to the East Central 27-yard line.

Gayten picked up a chunk of yards on his first carry as the BHS offensive line blew the smaller East Central defensive front onto their heels.

The third play of the drive saw the snap sail over the head of Ross though and the Hornets recovered.

Again, the BHS defense forced a punt. And again, BHS turned the ball over, this time via another fumble on the first play of the drive.

East Central drove down to the BHS 32-yard line and chose to go for it on 4th-and-3.

ECHS senior quarterback Deuce Hugger is shifty with the ball and keys the double wing, ground-based offense for the Hornets.

On that fourth down play, Hugger sprinted out on an option that was read perfectly by Markel Smith and Bryson Porter. The duo forced Hugger to make the pitch and tackled the EC running back force a turnover on downs.

The BHS offense started to click on the following drive as a mix of Ross and Gayten rushing moved Ole Brook down the field.

BHS had a near calamity on its next offensive drive, as another snap got away from Ross and he scooped up the ball and threw it out of bounds instead of taking a sack on his team’s own 1-yard line.

That set East Central up in great field position as they took over on the BHS 32-yard line and wasted no time in tying the game up on a fullback dive from junior Andrew Marble that made the score 7-7 with 5:17 remaining until halftime.

At that point, the BHS offense had been keeping things on the ground, but they opened up the passing game after the Hornets pulled even.

Ross hit a streaking Stewart on the second play of the drive for a 62-yard score with 4:21 remaining in the second quarter.

Stewart was wide open, so wide open that he slowed down and waited for the pass and still scored without being touched.

After forcing yet another EC punt, the duo hooked up again on a 22-yard scoring pass that put BHS up 21-7 with 1:18 left before the break.

East Central and coach Eric Collins showed they could move the ball quickly in the final minute of the first half though. The Hornets got down inside the BHS red-zone and came out to try a field goal on fourth down with 10 second left.

An offsides penalty by BHS gave ECHS a first down on the kick attempt and the Hornets decided to forgo the kick and try for a touchdown.

Hugger rolled to pass and then sprinted through the middle of the Panther defense with a hard cut back to the left pylon. He crossed the goal line just as the horn sounded to end the second quarter.

“Our whole talk at halftime was about how we’ve got to win the second half,” said Peavey.

The opening drive of the third quarter was another impressive performance by the BHS offensive line as Ross scored on a 20-yard run to put his team back up 28-14.

The visitors tried once again to pick up a 4th-and-short on their next drive, but senior AJ Robinson shot through to make the tackle and force a turnover on downs.

A 7-yard touchdown by Gayten then padded the lead and was followed later by a 14-yard rushing score from Ross that was the final touchdown of the game with 2:16 remaining in the third quarter.

That last BHS score was set up by a Markel Smith interception that snuffed out any hope of a comeback for the Hornets.

East Central found little room to run all night as 6-foot-3, 340-pound senior nose guard Caleb Harris controlled the line of scrimmage for BHS from the opening whistle until the final horn.

East Central gained just 174 yards in the game and averaged just 3.5 yards per carry. The Hornets also picked up 63 yards through the air.

BHS rolled to 415 yards of total offense in the game. Sophomore Bryce Smith finished 6-of-6 on PAT kicks for the Panthers.

In other 5A action played in the south portion of the bracket, West Jones held off a Gautier upset bid with a 31-28 win and Laurel went on the road to wreck George County 59-20.

Picayune was the only Region 4-5A team to win in the first round as they took care of Hattiesburg by a 35-13 final.

The Maroon Tide have a four-game winning streak over the Panthers and won 49-10 in the last meeting between the schools, a first-round playoff game in 2019. The winner of the BHS and Picayune game will move on to the 5A semifinals to face the winner between West Jones and Laurel.