It’s time for the Egg Bowl, and for some, the game of the year 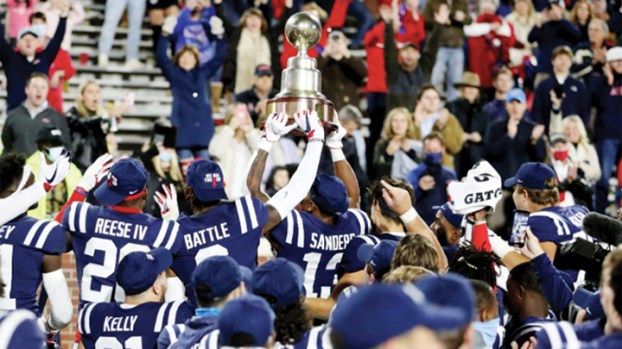 Photos by MSU/UM Sports Info Mississippi State and Ole Miss fans both hope it’s their team that will be holding the Golden Egg Thursday after the teams meet in Starkville. 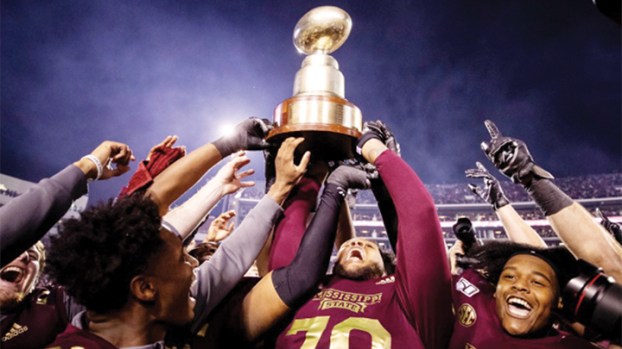 Photos by MSU/UM Sports Info Mississippi State and Ole Miss fans both hope it’s their team that will be holding the Golden Egg Thursday after the teams meet in Starkville.

I had a friend once who’d moved to southwest Mississippi for work after growing up a couple hundred miles to the north.

He’d never spent much time in this part of the state and had one observation about what was most different here as opposed to where he grew up.

“I’ve heard of people here who pull for both Mississippi State and Ole Miss,” the University of Mississippi alum said. “That’s something you won’t ever find where I grew up. It’s one or the other and it doesn’t matter who they’re playing, you don’t want the other one to win at anything.”

We talked about why that might be more acceptable here and the amount of LSU apparel that you’d find for sale in local sporting goods stores and the distance from Brookhaven to Baton Rouge as opposed to Starkville and Oxford.

He wasn’t so naïve to think that there weren’t people locally that hold a deep disdain for their rival school, but he found Egg Bowl based relations in this area to be a little more civil as opposed to where he’d been raised.

And I’m not sure if that’s still true or not today but speaking for me — someone that didn’t graduate from either school — I hope the most for a good game between the schools each year.

The Egg Bowl is back on Thanksgiving night this season and on paper it should be a great matchup between two closely matched teams.

Coach Lane Kiffin and his Ole Miss Rebels are 9-2 with only losses to Alabama and Auburn in 2021. The Rebels are coming off a 31-17 win over Vanderbilt and have possession of the Golden Egg Trophy after a 31-24 win in Oxford last season.

The Mississippi State Bulldogs are 7-4 under second year head coach Mike Leach. It feels like the Air Raid offense installed by Leach has started to click after MSU began the season with a 3-3 record.

State will have the advantage of playing in Starkville and the oddsmakers have the Bulldogs as one-point favorites on their home field.

I plan on watching the game in my favorite fashion — a turkey induced haze while laying horizontally on my living room couch.

My college football fanaticism has started to wane over the years. I no longer get up and watch every second of College Gameday on ESPN and then catch a little bit of each game all day until the kickoff of a University of Hawaii game that usually wrapped up well after midnight on ESPN2.

Still, I’m always going to watch every down of the Egg Bowl and it feels like that’s true of people from all over our state and even country who might not have a Dog or a Reb in the fight.

The 2019 Egg Bowl aka the Elijah Moore pee-pee-penalty game was one that will be talked about by our grandchildren.

When Moore hit all fours and raised his leg like Lassie, I jumped off my couch and hollered. I didn’t care if I woke my wife or kids or an actual dog — I was screaming in shock at Moore’s celebration and the ensuing missed PAT kick that gave MSU the 21-20 victory.

The 2018 Egg Bowl had a big fight at the end of the third quarter and the 2017 game had a pregame dustup.

In 1997, I’d just turned 16 and my older brother was a student at State in the forestry program. He took me and one of his friends to see the game in Starkville that season and it was an Egg Bowl to remember.

While buying a drink in the concourse before the game, I heard a roar coming from the crowd above me. I left my place in line for a Dr. Pepper and ran back up the ramp to field level.

There before me on the field was a hand-to-hand battle between the teams. Wes Shivers, a future MSU lineman, was at the game on a recruiting visit. Shivers got hit in the face with a helmet and was a bloody mess in the middle of the action.

The game lived up to the fight as State clung to a 14-7 lead with just over two minutes remaining. UM quarterback Stewart Patridge led a 64-yard drive that resulted in a 10-yard TD pass to Andre Rone with 25 second remaining.

A bowl berth was on the line and then Ole Miss coach Tommy Tuberville chose to play for the win rather than overtime.

The two-point conversion from Patridge to Cory Peterson gave Ole Miss a 15-14 win that ended the season for MSU at 7-4. Ole Miss received a Motor City Bowl invite and finished 8-4 after beating Marshal in Detroit.

I can still remember the way that Davis-Wade Stadium fell silent when Patridge winged the conversion thrown into a tight window. The Rebel seating section was going crazy as the student section where we sat was filled with angry, screamed obscenities.

I wanted State to win because that’s where my brother went to school, but as I stood there watching a pouty look darken his face, I was just feeling lucky to have seen such a great finish.

The tagline should be, The Egg Bowl — come for the fights, stay for the football.

Fighting was actually a big part of the creation of the Golden Egg Trophy. Ole Miss won the game in 1926 and broke a 13-game losing streak against then Mississippi A&M. An attempt by Ole Miss fans to tear down the goalposts in celebration led to a big melee.

The trophy was introduced the next season as an official totem to be awarded to the winner each year. The game was called The Battle for the Golden Egg and that name morphed into the Egg Bowl in the late 1970s.

A good game is what I’m looking for Thursday and it was the same thing I was hoping for last year when the schools met.

Last season our Wednesday edition ran a preview story about the game and had a picture of area alums Leo Lewis (Brookhaven High) and Farrod Green (Wesson) carrying the trophy around after an MSU win in 2019.

The game went final that Saturday night and you most likely read about it, heard about it or watched something about it in the following days via a variety of different media reports.

That wasn’t good enough for one caller who somehow got my cell phone number.

This job can be an odd one at times. When the ditch in front of your house isn’t draining properly you might call your alderman or supervisor. When you are concerned about the proposed elimination of the income tax you might call your senator or state representative in Jackson.

And sometimes, when they’re happy or mad about sports, sometimes people call me — usually to complain about something.

I’m always grateful for those who read my words and when folks like Miss Ellen that I grew up going to church with or sweet Miss Martha who recently passed away would stop to give me encouragement, I’ve always made it a point to thank them for reading.

And I do the same thing when someone is upset with what I did or did not write.

“I can’t believe you didn’t put anything in the paper about the Egg Bowl,” said the man on the other end of the line nearly a week after the 2020 game went final.

I did though, didn’t you see the story about all our local connections in the game that came out on Wednesday, I asked him?

“I saw that, I’m talking about after the game,” he said as his words started to come fast. “You didn’t even write one word about the game of the year.”

I’m not sure if it was the game of the year, I replied. It had some stretches of bad football, but it was fun when State made it close late. I just didn’t feel the need to further recap it in the paper this week. I’d moved on to cover high school basketball and soccer, I told him.

I’m sorry sir, I finally said. I’m glad your team won, but I think the word got out far and wide even without me writing about it.

He let out one more grumble and said, “I got you figured out now, you’re just a State fan.”

I laughed, told him thanks for reading and hung up.

That number might be saved as “Do Not Answer” in my phone now, but if you’re still reading — I’m way more than that, buddy.

I’m a Lane Kiffin fan — I love redemption stories and Kiffin seems like someone who’s genuinely grown from his past mistakes.

I’m a Grant Jackson fan — watching the MSU offensive lineman go from West Lincoln to Starkville has been an awesome journey to see since I started this job.

I’m an Oby’s fan — I haven’t eaten there in years, but I’m positive their food is still some of the best in Starkville.

I’m a Square Books fan — if I were to win the lottery, I’d want to open a bookstore just like that temple of knowledge that sits in downtown Oxford.

I’m a Matt Corral fan — the touch he puts on his deep balls is better than 99 percent of everyone who’s ever picked up a football.

I’m a JJ Jernighan fan — a kid that played at Co-Lin after prepping at Amory High and then walked on at MSU before starting games at running back this season is the type of inspiration I love.

I’m just an Egg Bowl fan, man. So, let’s hope for a little fighting, lots of points and maybe another one of those wild, memorable finishes that will make it the game of the year for whichever side wins Thursday night.

Cliff Furr is the sports editor at the Daily Leader. You can call him, but he probably won’t answer. You can email him at sports@dailyleader.com.