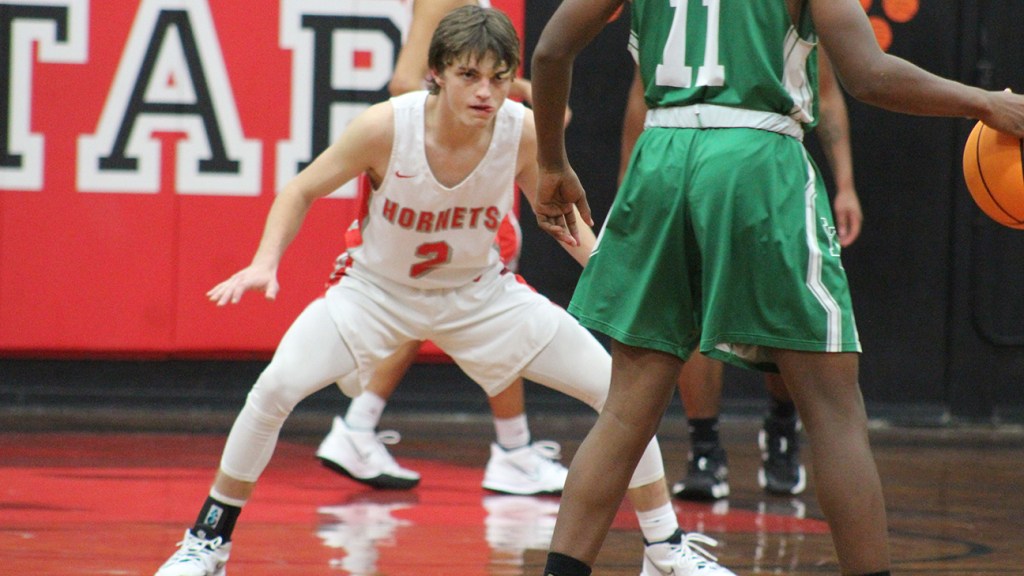 Photo by Cliff Furr / Loyd Star junior guard Blake Thornton gets down on defense Tuesday against West Lincoln in the county tournament.

The opening game of tournament play won’t likely be topped when it comes to an exciting finish.

With the game tied at 39-39, Bogue Chitto sophomore forward De’Mya Porter caught the ball in the paint and turned to score at the basket. Just 10 seconds remained when Porter’s shot went through, and Enterprise didn’t inbound the ball until only six ticks remained.

EAC junior point guard Hannah Jergins saw that head coach Shane Adams wasn’t going to call a timeout and brought the ball up the right side of the court. Jergins shot a running 3-pointer that left her hand just before the final horn sounded.

The runner swished straight through the net to give the Lady Jackets a last-second win. Jergins finished with 14 points to lead her team.

Junior Ellie Davis, senior Ashlyn Bland and senior Natalie Harris added two points each to round out the scoring for EAC.

A close game in the first half turned into a rout for Howard’s Bobcats as BC began to shoot the ball with better accuracy in the final two quarters.

Bogue Chitto (4-2) was up 17-15 at halftime as freshman point guard Devonta Thompson led the Bobcats with seven points at the break.

Thompson and junior guard Shomari Jenkins torched Enterprise in the third quarter to open the game up.

Gabriel Harthorne scored three points for the Bobcats while Noah Magee added two points as did Isiah Collins. Jay May also chipped in five points for BC.

The Bobcats won 58-51 when the teams met on Nov. 19 at Bogue Chitto. The win was the fourth straight of the season for BC.

The most anticipated game of the night was a Loyd Star and West Lincoln matchup that served as a preview of the fight for the top spot in Region 7-2A.

West Lincoln and first year coach Alissa Adams came out with an efficient start that saw them jump to a 15-3 lead after the first eight minutes.

“They came out with a physicality that I think caught us early,” said Loyd Star head coach Seth Britt. “They lost three senior starters and don’t have any seniors on this year’s team, but they’ve got some experienced younger players that are playing really well.”

One of those players is junior Kara Beth Addison who scored nine first quarter points for West Lincoln.

Another thing that didn’t help Loyd Star was Aubrey Britt, their senior leading scorer, picked up a pair of first half fouls.

Loyd Star began to move better defensively and keep West Lincoln off the offensive glass as the lead began to dry up. A floater by LS junior guard Carson Hughey pulled her team within 24-21 late in the second quarter and West Lincoln held a 26-21 advantage at the halftime break.

The momentum stayed in favor of Loyd Star at the start of the third quarter as they quickly knotted the score at 26 when Britt hit a layup and Hughey knocked down a corner 3-pointer on back-to-back possessions.

Britt finished with 18 points and Hughey had 17 for the Lady Hornets.

The home team fed off a few West Lincoln turnovers and cashed in transition layups to pad a lead that eventually grew to double digits.

One last offensive spurt had Loyd Star scoring in the paint on consecutive layups by senior forward Madison Falvey to help hold off any late West Lincoln rally.

“I told the girls after the first quarter that we weren’t playing our style of basketball,” said Britt. “We started controlling the class on both ends, limiting their put-back chances and woke up ourselves up.”

The game was a non-division pairing. The schools will meet in region play at Loyd Star on Jan. 4 and at West Lincoln on Jan. 21.

The Lady Bears (3-5) have won the Region 7-2A regular season title for the last four straight seasons. The win broke a seven-game winning streak by West Lincoln in the series dating back to a 47-46 win by the Lady Hornets at home on Feb. 5, 2019.

Junior guard Blake Thornton of Loyd Star hit a 3-pointer on the first possession of the game for the Hornets. Thornton later nailed another shot from deep that came just before the halftime horn that put his team up 24-16 at the break.

In between those Thornton baskets, the teams combined for 16 minutes filled with turnovers and empty possessions as the game lacked any flow or rhythm.

West Lincoln turned the ball over on its first five possessions, but still were able to pull within 5-4 of Loyd Star when senior forward Enrico Price hit a driving layup midway through the first quarter.

First year West Lincoln coach Jay Case has young guards that are still learning when to pick the ball up instead of trying to dribble through a sea of slapping, reaching hands.

For Seth Britt, who coaches both Loyd Star teams, his boys’ group returns nearly the entire roster from a team that won the Region 7-2A title last season.

The win was the second of the season for Loyd Star (2-6) as Britt’s crw beat Wesson and has losses to Lawrence County, St. Andrew’s, Salem, North Pike along with a pair of defeats to Franklin County.

The Bears (0-6) are still searching for their first win of the season as they battled but never got the margin below 10-points in the final quarter.

Eight Hornets scored for Loyd Star, led by senior forward Craig Bass with 13 points. The 6-foot-4 Bass is best known for being part of the Loyd Star baseball pitching staff. Having not played basketball since junior high, his addition gives the Hornets size inside, something that West Lincoln couldn’t counter.

After the conclusion of the county tournament, Loyd Star has road games at North Pike and Lawrence County along with a home game against Wesson on its pre-Christmas schedule. The first Region 7-2A game will be at home against West Lincoln on Jan. 4.

“We came out in zone and I kind of wanted to stick with that, but we went to a man-to-man defense in the second half and that changed the tone of the game for us,” said Britt. “We got some turnovers and transition buckets off our defense that helped loosen us up.”

Case and his Bears will play at Wesson, Salem and the Mississippi School for the Deaf later in Dec. They’ll also host Puckett on Dec. 10 and play at the Puckett Holiday Tournament on Dec. 28-29. West Lincoln is scheduled to play Pelahatchie on the first day at 10:30 a.m. and Crystal Springs at 1:30 p.m. on Dec. 29.

Lincoln County Tournament basketball resumes on Thursday with Bogue Chitto and West Lincoln playing in the 4p.m. and 5:30 p.m. games. Host Loyd Star and Enterprise then tangle in the 7 p.m. and 8:30 p.m. matchups.

The schedule for Friday has West Lincoln and Enterprise playing in the early games and Loyd Star facing Bogue Chitto in the final pair of games.