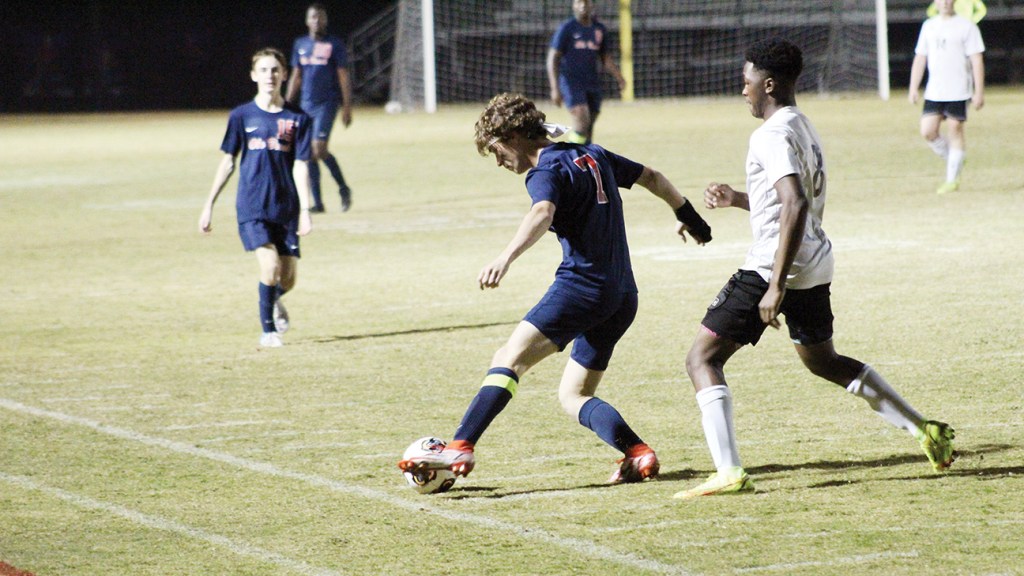 The Lady Panthers and coach Dustin Bairfield moved to 7-3-1 on the season with a 3-1 victory. LC, coached by Loyd Star alum, John Floyd now has a 2-7 record thus far in 2021.

It was a similar result for the BHS boys’ team as they won 3-0 behind a trio of second half goals. Coach Aaron Ayers’ team sports a 6-3-1 record after the win while Lawrence County fell to 3-5-1.

Bairfield, who coaches as a paraprofessional while also serving as Lincoln County Circuit Clerk, is in his second year as head girls’ coach at BHS.

Last season the girls’ team battled through COVID-19 cancellations and quarantines to finished 9-4-1 and as winners of Region 6-5A. BHS lost 5-0 to Pearl River Central in a first-round playoff matchup.

The ascent to head coach for Bairfield came after longtime leader Kevin Bower stepped away from coaching after the 2019-2020 season. The Lady Panthers have won six straight region titles under Bower and then Bairfield and are 32-0 against division opponents during that time.

That unbeaten run has plenty of wins over Natchez and schools from the Jackson Public School system. Last season BHS scored 23 goals and gave up just one in region matches against Forest Hill and Natchez. Wingfield, the fourth member of the region, forfeited their matches last season.

The regular season success hasn’t translated to the postseason though as during the run of region titles, the team is 0-6 in the playoffs and have been outscored by a combined 33-2 in those first-round losses. A 1-1 tie in 2016 that was decided by penalty kicks, won by Long Beach, was the closest BHS has come to winning in the first round.

The 2021-2022 season has Brookhaven stepping into a tougher region that’ll feature stronger competition for both teams. On the girls’ side of the region, West Jones currently sits 11-0-1 with only a tie to Desoto Central marring their record.

Florence has been a perennial soccer contender in 4A and now find themselves in the 5A ranks as a member of Region 6 with Brookhaven, West Jones and Natchez.

The Florence girls are 7-1, having only lost to Northwest Rankin this season. The West Jones boys are 8-3-1 this season and Florence sits at 6-2-1 on the season in boys’ action.

The BHS boys finished as region runners-up and lost 4-0 at Long Beach in the opening round of the 5A playoffs last season. Like their cohorts on the girls’ team, the Panthers are still looking for a breakthrough win in the postseason.

Freshman Ethen Lopez, sophomore Robert Massengill and senior Addison Brady had one goal each for BHS in the win over Lawrence County.

Brady scored via a header on a corner kick that came off the foot of sophomore Ashton Ogletree. Sophomore Braden Bairfield also had a pair of assists.

Brady, Christian Peyton and Bryce Bradley make up the senior class for Ayers. The Panthers were without leading scorer Cole Cruthirds in the win over LC. A junior, Cruthirds has scored seven goals this season for BHS.

The roster is heavy on sophomores, many of whom have played in varsity competition since they were in junior high. Sophomore goalkeeper Bryce Smith picked up the shutout win in the net for Ole Brook.

On Dec. 14, the Panthers play at Natchez and they close the 2021 portion of the schedule on Dec. 16 at Florence.

“We knew as soon as they released the new regions that we’d be playing a higher level of competition this season,” said Ayers. “That’s been on our mind through preseason practice and on into the non-region portion of the schedule. It’s a challenge that we’re looking forward to facing.”

The BHS girls’ roster is filled with a comparable mix of youth and experience. Senior Leyton Roberson scored a pair of goals in the win over Lawrence County. Freshman Caroline Kilpatrick added one goal and an assist for her team.

The lone Lawrence County goal came off the foot of senior Alexys Williamson.

Juniors on the team are Anna Buitt, Elizabeth Donegan, Ramie Stovall, Maryanna Boyte, Leslie Williamson and goalkeeper Maelee Thibodeaux. Thibodeux is a returning starter who was credited for the win over Lawrence County.

Sophomores on the team include Anna Hayes, Maggie Sheppard and Jayla Wilson. The freshman class is made up of Kilpatrick, Mary Parker Mason, Annabelle Summers and Violet Belk.

The losses for the Lady Panthers this season have all been close (2-1 to Franklin County, 3-2 to Loyd Star and 2-1 to Wesson).

“We’re improving,” said Bairfield. “We’ve got a lot of people in new or different roles and it feels like we’re still trying to come together in some ways.”