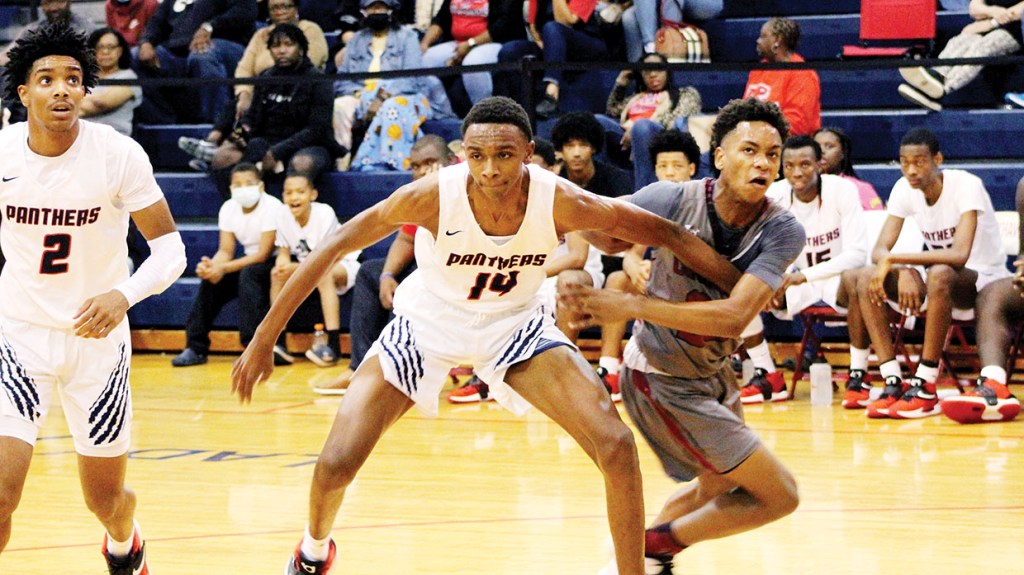 Photo by Cliff Furr BHS 6-foot-7 senior forward Anthony Sanders gets down to block out Tre Jones of Lawrence County in the second half Friday.

As one can expect when Lawrence County and Brookhaven High meet on the basketball court, there was a large crowd Friday watching the teams take each other on in Sinclair Gymnasium.

The final eight minutes of action saw each team trading baskets and each crowd reacting to every play like the game was for a championship.

The final minute contained a game’s worth of drama as it looked like BHS would win and then maybe lose, before gaining a memorable 56-55 victory.

The Panthers led 54-53 and had possession of the ball with 90 seconds remaining. Lawrence County chose to closely guard the Panthers instead of fouling to put BHS into a 1-and-1 situation.

The Cougars had only been called for four fouls at that point and just as their coach Pat Bridges called for them to start fouling, the Panthers turned the ball over via an offensive foul call.

Bridge’s team took possession with just under a minute remaining.

Facing a BHS zone-defense, LC moved the ball around until junior guard Trey Jones drove the left baseline and put up a floater that had his team ahead 55-54 with 20 seconds remaining.

It looked like the game might be lost for BHS as in a rush to get the ball down and into a quick offense, it went over the baseline with the first official signaling that it was out on the Panthers.

That call was overturned though, much to the disdain of Bridges and the LC fans that sat behind the Cougars’ bench.

On the ensuing baseline out of bounds play, with 13.9 seconds remaining in the game, the ball went to BHS senior point guard Demeriuntia Jackson who hoisted a shot from the corner.

Jackson’s jumper went long, but sophomore Jalen Haliburton came flying in from the weakside for a rebound that he then shot back up while still in the air.

Haliburton landed on his back as the ball went through the net and the home fans roared in approval at the 56-55 lead. Jackson then stole the ensuing inbound pass to ice the win for the Panthers.

BHS won 77-52 when the teams met in Monticello on Nov. 19, but this time Lawrence County led early and made the most of opportunities in the first half.

“I told our guys before the game that just because you won big the first time, don’t expect that to happen this time,” said BHS head coach Charlton Grey. “They made adjustments and we had to in turn make adjustments as well.”

Grey is in his first year as head coach at Brookhaven High after a successful run as the girl’s coach at McComb.

LC senior point guard Jaheim Ball pulled up for a long 3-pointer just before the halftime buzzer that put his team up 28-22 at the break as his team sprinted to the dressing room with a jolt that came from Ball’s confident, long shot.

Grey wants his team to place at a fast pace and create offense with their defense — but that didn’t start to click for the Panthers until the second half.

One thing Grey has shown a willingness to do thus far in his time at BHS is to give players on his bench a chance to come in and impact the game. Grey wants the type of effort that leaves them spent when they come off the court.

“They know that I’m consistently evaluating them to make sure that they’re playing as hard as they can,” said Grey. “I’m also evaluating myself at the same time in order to make sure my enthusiasm and energy doesn’t wain. We’d hit a little patch of adversity of late, but the guys fought for this win and for that I’m proud.”

Jackson led the way in the win with 19 points for BHS. Haliburton came off the bench to add 10 points. 6-foot-7 senior Anthony Sanders scored seven points, grabbed 12 rebounds and blocked three shots for the Panthers.

The Panthers started the pre-Thanksgiving portion of their schedule with an 6-2 record, their losses coming by two points to 6A Germantown and to a Brandon High team that is one of the best in the state.

The adversity Grey was speaking of was a three-game losing streak that the LC win snapped. BHS had lost at Murrah, at Franklin County and at Tylertown during that time.

There is still plenty of basketball left for BHS to play in 2021. The Panthers host Wingfield on Dec. 16.

On Dec. 21 at South Pike, Ole Brook will face Douglass High of Memphis in a 2:30 p.m. matchup. The next day, the Panthers will play Newton High at South Pike for a 1:15 p.m. tipoff.

BHS is also slated to play in the McComb High Tournament on Dec. 27-28. They’ll face the homestanding Tigers at 8 p.m. on the first night before playing South Pike on Dec. 28 at 5:30 p.m.