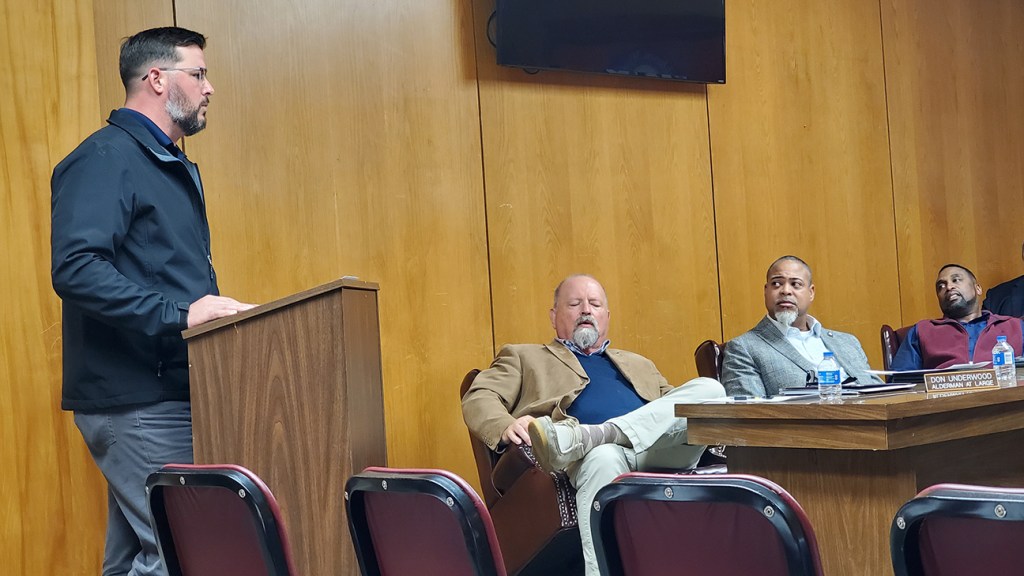 The replacement of street lights are at a standstill due to problems getting needed supplies.

That was the main item of concern presented to City of Brookhaven aldermen Tuesday by Dusty Shack of Entergy.

In what Shack called a “system-wide” problem, Entergy has been unable to obtain back-ordered LED supplies to update or replace lights in the city. While some lights are still sodium, the city has opted to move to LED lighting, which is cheaper long-term.

“If I recall correctly, when we replaced a lot of the lights with LEDs years ago, they paid for themselves in 10 months with the amount of money the city saved,” Mayor Joe Cox said.

Shack said Entergy is putting together a plan to replace and/or install new LED lighting along Hwy. 51 from Country Club Road to Industrial Park Road.

“I don’t know if you’re going to want to do it, because the cost will be high,” he said. He will present the plan to the board once it is completed. In response to questions from several aldermen, Shack said his team would put together proposals for any areas they submit to Public Works Director Keith Lewis.

Shack said he was asked to talk about use of some of Entergy’s light poles for security camera access.

The installation of necessary parts on selected poles will allow the municipality to use access to install a camera on that pole, Shack explained.

Police Chief Kenneth Collins believes cameras installed across the city will help reduce crime and will provide video records that may lead to solving crimes.

“I suggest a pilot program in one or two areas to see how it works,” Shack said.

The board will review the information and address it at a later meeting.

• Approved the hire of Canon Travis as a fire fighter at $28,646.50 annually, pending drug test and physical.

• Approved pay request No. 7 to Dickerson & Bowen in the amount of $23,781.17 for work on city-wide paving project; transfer funds from paving bond.

• Approved reappointment of Curtis Oliver to Board of Adjustments as Ward One representative for four years.

• Approved monthly rental rate of $400 plus cost of metered electricity for new Hangar K at the Brookhaven/Lincoln County Airport.

• Approved pay request No. 1 and final to Greenbriar Digging Services in the amount of $48,650 for Jennifer Street water line replacement; revise water/sewer budget to include project.

• Approved to receive and award lower bid to Greenbriar in the amount of $11,100 for the Halbert Heights/Virginia Avenue sewer extension. One other bid was received, from Ross Jackson Plumbing for $12,500.

• Approved pay request No. 3 from Greenbriar in the amount of $25,080 for work completed on KDMC/City of Brookhaven Water Supply Well.

• Approved pay request No. 3 from Greenbriar in the amount of $343,317.84 for stored materials and work completed on the West Meadowbrook sewer improvements project; transfer funds from water/sewer reserve to cover.

• Approved pay request No. 5 from Dickerson & Bowen in the amount of $65,147.47 for work completed on Brookhaven Airport Rehab project.

• Approved to advertise for demolition and removal of dilapidated structures.