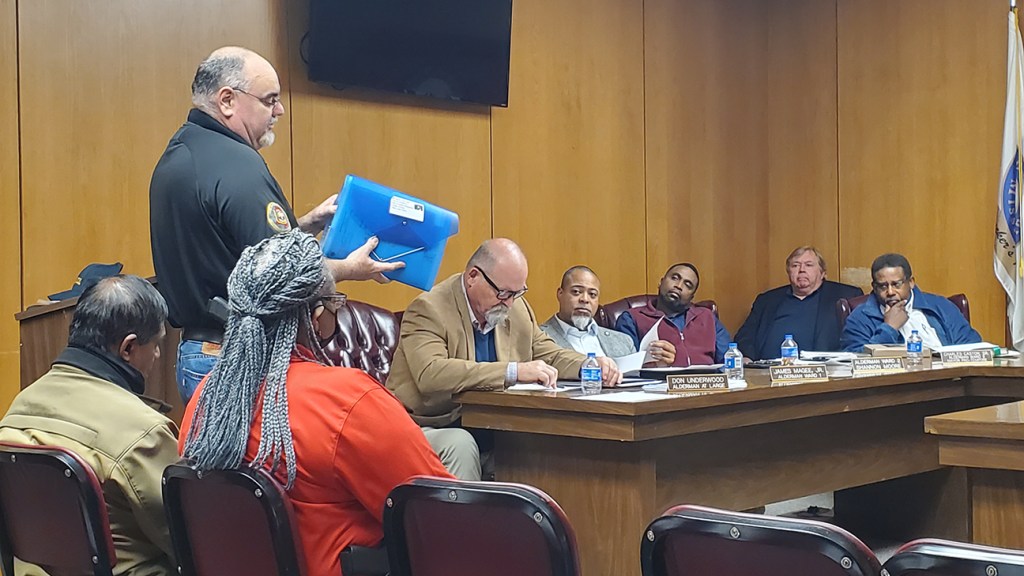 Brookhaven Police Department Detective Capt. Clint Earls stood before the Board of Aldermen Tuesday with his hat literally in hand.

“I brought this hat to illustrate something for you,” Earls said.

He put it on his head and said, “Crime scene tech.”

He removed it then replaced it atop his head, saying, “Investigator.”

Removing and replacing it each time, he added other jobs he routinely performs — complaint department, general flunky, administrator, officer.

“These are all jobs that I perform. I’m not complaining — I’ve got the best job in the world, in the best city in the United States, Brookhaven,” Earls said. “I love my job and I would love the leave the City of Brookhaven better than I found it.”

The 31-year BPD veteran described for the board the process of investigating a crime scene — a process that can take investigators hours. His concern and that of other investigators, he said, is that suspects could be well outside BPD’s jurisdiction by the time the scene is processed.

“When we have a major violent crime, we have to call the captain at MHP, who contacts the lieutenant at MBI, who then has to contact the Crime Scene Unit on the Coast, our district,” Earls said. “Then they have to assemble and head this way. That can take several hours.”

With only nine CSUs in the state — three in Jackson, three in Batesville and three in Gulfport — Earls said Brookhaven is in dire need of a dedicated unit. BPD requested a unit be placed at the Mississippi Highway Patrol’s Troop M station in Brookhaven a few years ago, but was denied due to lack of funding, the captain said.

The investigator said some local crime scenes can become hostile, with 100 to 150 people quickly surrounding the area, some of whom can become unruly or violent, and this can easily lead to contamination of a crime scene.

“We have one opportunity to get it right. Once it’s contaminated, there’s no fixing it,” Earls said. “All our investigators are trained as crime scene techs. The investigators can do it, but realize in the same amount of time it takes us to process the scene, the (suspect or suspects) may have gone mobile or we could have multiple crime scenes by then.”

The detective showed a stack of paperwork to the board and said, “This is the paperwork a tech fills out.”

Then he held up a thick blue file folder and said, “This is my paperwork, one just one case.”

“We have supplies we carry with us that will handle most crimes, but not major violent crimes,” Earls said. “A unit here would free up my investigators to pursue suspects instead of processing the scene.”

“So what is the answer?” asked Mayor Joe Cox.

“We can no longer wait on the state,” the police captain said. “We need to develop a vehicle, get supplies and start getting civilians or officers trained. It would give us somebody now to work on crime scenes to free us to start the chase.”

Tuesday afternoon, officers responded to a fight at Walmart on Brookway Boulevard. Three people were arrested after an apparent domestic-type dispute over money, BPD Chief Kenneth Collins said. All were charged with disturbing the peace and one was charged with illegal possession of a concealed weapon.

Earls said when the concealed weapon was discovered, he took it and test fired it at the city’s shooting range. The spent shells and bullets will be processed by the crime lab to determine if the weapon was used in any of the city’s unsolved crimes.

Earls said the addition of a testing barrel at BPD would help expedite that process.

Det. Sgt. Penny Banks also addressed the board, discussing her many duties as a bailiff for the Circuit Court, in addition to her regular investigative duties. She said the hire of a dedicated bailiff would also improve the work of both jobs — bailiff and investigator.

“It’s a lot involved, and it takes away from what my initial job is,” Banks said. “We’re all doing the job of two people, basically.”

The officers did not request any action be taken by the board — the department’s budget is adequate to provide for everything the detectives mentioned.

“This is just for your information,” Collins said.

“You have the money. You’ve managed your budget. You do what you need to do, sir,” Alderman-at-large Don Underwood said, with agreement from the remainder of the board.

Chief Collins said the department is working to bring Brookhaven into the future in law enforcement.

“I need business leaders and community leaders to help us. I want this town to step up and get modernized with cameras in every place we can because crime is steadily growing,” he said. “These will help us look out for each other, because getting people to talk is getting harder.”

“Has anyone found in anything in life worth dying for? We’ve found something worth dying for,” Collins said. “That’s working for and protecting the City of Brookhaven. We are dying and getting killed every day trying to do our jobs.”

• 43 personnel in the department