Peavey is All-Area Football Coach of the Year 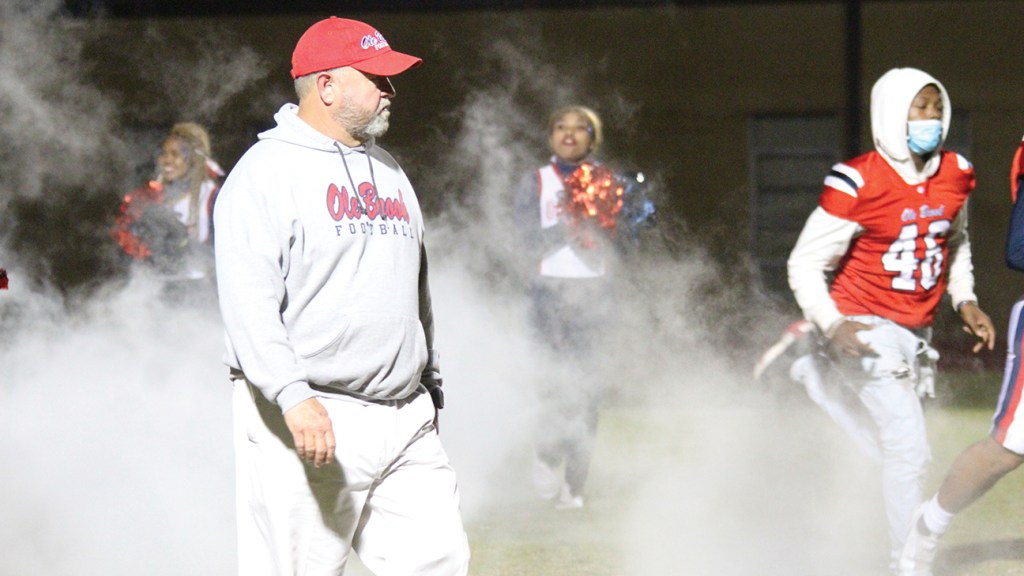 File photo Coach Tucker Peavey walks onto King Field with his Panthers prior to the start of a 2021 football home game.

It’s late in the summer and classes are starting back for most of the schools in the area. The Brookhaven High Panthers are on their practice football field in shorts and helmets, going through one more workout before classes start back and pads soon come out later in the week.

The session is ending with sprints and head coach Tucker Peavey has told his team he wants them to run through the line on each rep.

An assistant coach lets Peavey know that a senior checked up before crossing the line. That will go down as a no-rep and the team will have to run it again.

The seniors who did run let the linebacker who didn’t finish correctly know that’s they’re ticked off. Come on man, they holler at him, do it right every time.

The message of doing things right every time is carried over to the post-practice huddle. Peavey stands over his team as they kneel with helmets off and look up at their coach.

He starts the address with reminding them of what time they’ll come to the fieldhouse the next day and what time they’re expected to be dressed and some other odds and ends of team housekeeping.

Then, Peavey ends with some actual housekeeping in regard to the team’s restroom. He’d not been happy with the state of the bathroom in the fieldhouse the day before and he’s letting them know about it.

“No one was put on this earth to clean up after you,” Peavey tells the team. “Not your momma or your daddy or your grandparents or aunts or uncles or teachers or coaches. No one was born to come behind you and pick up your messes — that’s your job. Do you understand?”

The team lets out a loud “yes, sir” in unison.

The little things have always been the big things for Peavey in his long, championship-winning career. The 2021 edition of BHS football was a team that showed improvement through the year to gain a runner-up finish in a loaded Region 3-5A field, earning Peavey the honor of being named The Daily Leader All-Area Coach of the Year.

Peavey spent the early parts of his career in the college ranks and in the state of Louisiana. He coached at LSU, UL-Lafayette and UL-Monroe as an assistant over the years.

He was hired as the head coach at Pearl River Community College in 2002 but resigned without ever coaching a game there.

The head football job had come open at Brookhaven High and the chance to lead his alma mater was one Peavey couldn’t resist.

For nine seasons he led the Panthers and in that time the team went a combined 72-34 with the unforgettable 14-1 campaign in 2004 that ended with BHS as 4A state champs. The 2010 team also made a 5A title game appearance and soon after that season, Peavey was back to the college ranks.

He first worked at the University of Southern Mississippi as an offensive line coach before taking over as head coach at Southwest Mississippi Community College.

Peavey returned to BHS in 2018 and this year’s team was his best since coming back.

The Panthers had a solid running game that featured quarterback Dre Ross and running back Xavier Gayten working behind a big, experienced offensive line group. The BHS defense had speed in the second level and was good against the run and pass.

After West Jones beat BHS 26-0 on Sep. 24 to drop the Panthers to 1-2 on the year, Mustang head coach Scott Pierson — a longtime friend of Peavey — said he felt fortunate to catch Ole Brook early in the season when things weren’t dialed in yet for the team. Pierson called the Panthers explosive and predicted more wins for the team as the season progressed.

That’s exactly what happened as the team from BHS got better each week. They beat Laurel 24-12 on Oct. 1 to break a three-game winning streak by the Golden Tornados in the series between the schools.

The Panthers then lost a heartbreaker, 20-14 in overtime, at Wayne County to make them 1-2 in the division.

The bounce back came the next week when Ole Brook dominated Hattiesburg for a 32-14 win on King Field. The Tigers had previously won five in a row over BHS including a 52-6 drubbing in the 2018 playoffs.

Those wins grew confidence as the Panthers ended the regular season on a four-game winning streak.

The most important assistant for most head coaches is the one that works with them at home and in his wife Leah Ann, Peavey has a partner that fits perfectly.

Leah Ann Peavey has been a chemist and a chemistry teacher throughout her career. For the last six years she’s taught at the Brookhaven Technical Center as an instructor in polymer science.

As big of an impact as Tucker Peavey has had in winning football games at BHS, Leah Ann Peavey has made a similar mark by nurturing a love of science in the students who pass through her lab.

One thing the Panthers thrive on is organization. You’ll rarely ever see them scrambling to get a player on or off the field as they take few pre-snap penalties. The assistant coaches are sharp and are correcting mistakes and making adjustments throughout the game.

The coaches and players know what’s expected from them and that starts with Peavey’s leadership — stressing the little things that matter every day and in every phase of a football program.