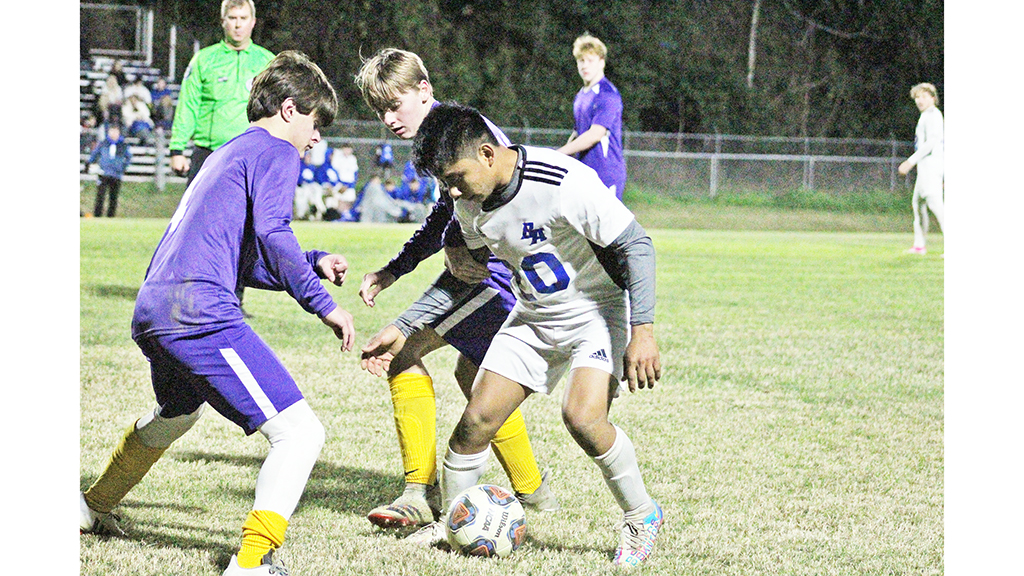 Photo by Ernest Bowker/The Vicksburg Post Brookhaven Academy's Enrique Hernandez (20) fights for the ball with St. Aloysius' Corbin Burroughs and Eli Shiers in the second half of Tuesday's game.

VICKSBURG — St. Aloysius seemed a bit sluggish and out of sorts on Tuesday, and Brookhaven Academy seemed more than happy to take advantage of it.

Brookhaven scored three goals in the last 11 minutes of the first half to blow open a tie game, and went on to beat St. Al 6-2 in a boys’ soccer match Tuesday at Balzli Field.

“If you’re going to win state you’ve got to beat this team. They’re not a perennial power, they’re just a team that’s picked up some men,” St. Al coach Jay Madison said. “Their leadership did better for their team than our leadership did for our team. Our guys are good and they’re good leaders. They just didn’t do that tonight.”

The additions that Madison alluded to on the BA roster are the transfer of freshman Yojan Hernandez, junior Enrique Hernandez and senior Yosvin Hernandez from Bogue Chitto this year. Yojan and Yosvin Hernandez are brothers and are cousins of Enrique.

Yosvin Hernandez scored four goals for Brookhaven (9-0), including two during the flurry late in the first half. He started it with a goal in the 29th minute, then scored again on a 15-yard free kick just before time expired.

The reigning Daily Leader All-Area Player of the Year, Yosvin Hernandez has scored 20 goals through nine games this season for Brookhaven.

Yojan Hernandez also scored, in the 38th minute, as the Cougars turned a 1-1 tie with 11 minutes left into a 4-1 lead at halftime. Yojan Hernandez is second on the team with 14 goals this season for the Cougars.

Madison said a combination of a talented opponent, a bit of rust from a long holiday layoff, and some general “negativity” led to a less-than-stellar night for his team.

“A lot of ninth-graders in there. Young guys, and then some of the older guys were leading the negativity,” Madison said. “They’re a good team. They beat us twice. But it’s also a team that’s not in our district, so we can play and learn.”

The Cougars and Flashes are both members of the MAIS Division II classification in soccer. BA plays in the south region with Adams County Christian School, Cathedral School, Copiah Academy and Oak Forest Academy.

“St. Al is really well coached and probably the most tactically disciplined team we’ve played this season. They play super hard and are very physical,” said first year Brookhaven Academy soccer coach Alex Brown. “The first time we played them (a 6-4 BA win on Nov. 16) we were just getting half the team back from football and we really didn’t have that much chemistry. We did a much better job of controlling the game and holding our width this time around. We were much more creative in the attacking third and we did a better job of moving without the ball.”

St. Al (5-4) managed to pull it together a bit in the second half, but never got back in the game as far as the score was concerned.

Logan Alexander scored midway through the second half to put Brookhaven ahead 5-1, and Yosvin Hernandez got his fourth goal in the waning minutes.

St. Al had a couple of scoring chances early in the half. A corner kick gave the Flashes possession of the ball in front of the net, but they couldn’t get a shot off. Moments later, Cooper Madison was stopped by keeper Jaden Lea on a contested breakaway.

St. Al finally got on the board with a goal from Eli Shiers in the 65th minute, but that only cut it to 5-2. Cooper Madison assisted on Shiers’ goal, and also had the Flashes’ first goal early in the first half.

“We defended a lot better in the second half, and that’s what it is against this team,” Jay Madison said. “We’re going to have our opportunities, but we can’t let their midfield flow through and then all of a sudden it’s five vs. our guys in the back. That’s what they do that’s different than most teams we play. This team is really creative in the midfield.”

The next home match for Brookhaven Academy is scheduled for 5:30 p.m. on Jan. 18 against Madison-St. Joe.