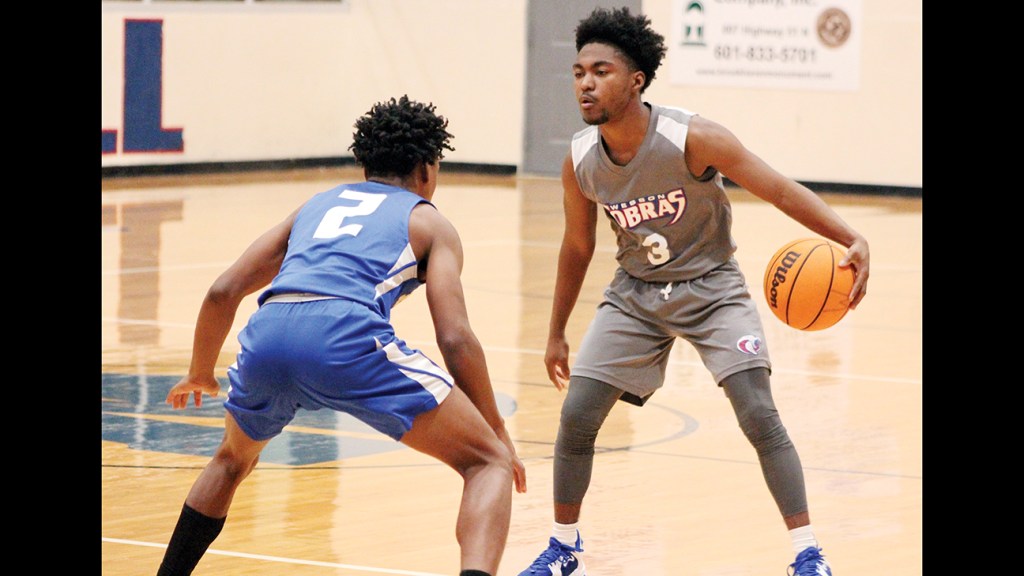 Photo by Cliff Furr Junior point guard Christian Davis scored 29 points Tuesday but Jefferson County was able to hold on for a 90-82 double overtime win against Wesson in The Snake Pit.

Wesson jumped out to a 13-0 lead over Jefferson County in the region opener for both schools Tuesday in Copiah County. The pace of the game was like a drag race though and no lead was safe as both teams zoomed back and forth down the court.

Ultimately, Jefferson County took home a 90-82 double overtime win in a game that had several near finishes.

One of those was the end of the first overtime when the teams had gone to an extra period after being tied at 71-71.

Jefferson County led 78-75 with just under five second remaining and Wesson needing to go the length of the court to tie.

That’s exactly what Wesson did as the Cobras threw the ball ahead to junior Grayson Coates. Coates caught the ball, turned and faced the basket and buried a long 3-pointer while the buzzer sounded to tie the game at 78-78 and send it into a second overtime period.

That final four-minute overtime period was all Jefferson County as Wesson’s depth was tested late with six players fouling out in the game.

The game was kind of wild at times, especially during a third quarter that saw the Tigers get called for four technical fouls, including two that led to coach Delvin Thompson being ejected.

The first tech was called when a Jefferson County player didn’t agree with a foul call and jumped up and down in frustration.

While the officials talked with Wesson coach Rusty Newman on who would take the ensuing foul shots, Thompson walked towards their meeting to ask what his player said or did.

When one of the referees put their hand up and lightly touched Thompson’s chest in order to usher him back towards his bench, the coach smacked the hand away and told the referee not to touch him.

That earned him his first technical and then while pacing the sideline and talking to another ref, Thompson earned his second technical foul and the $300 fine that comes from the MHSAA with an ejection.

Wesson led 57-43 after three quarters, but Jefferson County picked the pace up in the final eight minutes of regulation to change the game.

The Tigers doggedly guarded in the full-court and Wesson got loose with the ball as both teams piled up turnovers and Jefferson County feasted off points from those turnovers.

Newman has a completely new team after winning Region 7-2A last season. The ability of Davis to score bodes well for the Cobras (6-7) in their upcoming Region 7-3A play.

Coates started alongside Davis on the wing and scored 17 points for Wesson. The starting lineup was rounded out by senior Jakyle Brown, senior Collin McGowen and senior Sebron Smith.

Wesson plays at Jefferson County on Jan. 21 in the return game.