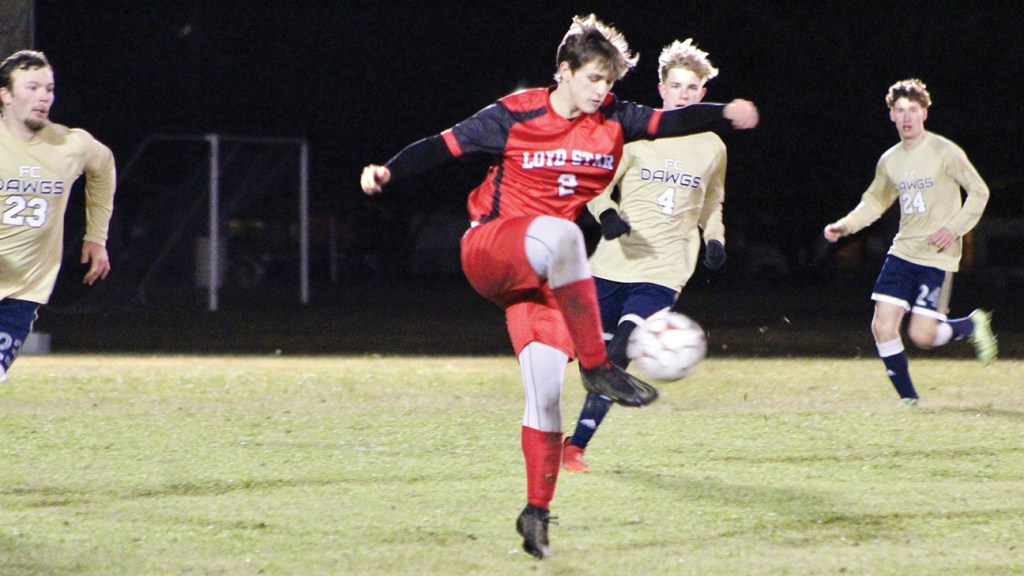 Photo by Cliff Furr Junior Carter Holcomb corrals a touch Monday against Franklin County. Holcomb tied the match at 1-1 in the second half, but FC got the win via penalty kicks in overtime.

That meant things would be settled with penalty kicks and it was Franklin County taking the win by a 2-1 PK advantage.

Franklin County went ahead 1-0 on a header by Nathan Griffin early in the first half.

Loyd Star battled for scoring chances and got one late in the second half when junior forward Carter Holcomb broke away for a shot and then bounced his own rebound off his lower legs into the net.

Sophomore goalkeeper Caleb Smith made two diving saves for Loyd Star in the penalty kick shootout, but the Hornets struggled to convert their chances.

Franklin County is 11-3-3 on the season and 7-0 in Region 7-Class I. The only losses this season for coach Jeff Long’s team were to 5A Ridgeland, 4A Richland and 5A Brookhaven High.

Loyd Star and coach Jordan Lea are 10-6 this season and 5-2 in division play with their only losses coming to Franklin County. The Bulldogs won the first meeting between the schools 1-0 on Dec. 14.

“Effort has never been an issue with this group,” said Lea. “They gave it everything they had tonight.”

The Hornets are in position to finish second in the region and that would put them on the road in the opening round of the MHSAA playoffs.

Loyd Star has four regular season matches remaining — if none are canceled due to COVID-19 — and they’ve already equaled their win total from last season, which was the first winning season for the program since the 2014-2015 campaign.

The program is trending up as eighth grader Cooper Creel leads the team with 10 goals this season. Warren is second on the team with eight and sophomore Cooper Reid has scored five goals.

The first round of the MHSAA soccer playoffs is schedule to begin on Jan. 25.