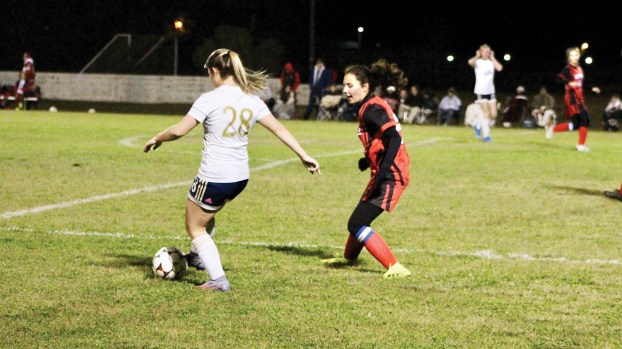 Photo by Cliff Furr Loyd Star senior defender Brooke Cade closes out on the ball and challenges Kayleigh Bolt (No. 28) of Franklin County for possession on Monday. 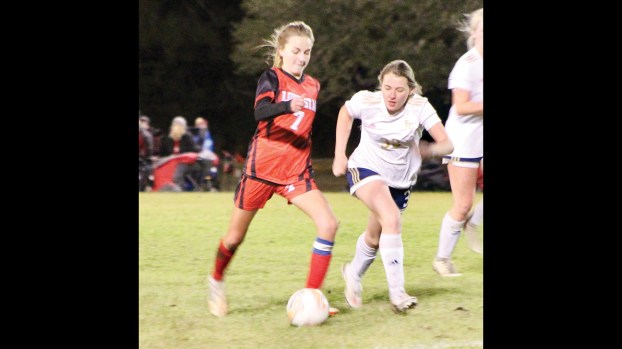 The win moves Loyd Star to 13-3 on the season and 6-1 in the division. FC won the first matchup between the schools on Dec. 14 in a shootout after the score was tied at 2-2 in Meadville.

Franklin County (10-7-1) has been a longtime power in the region under the leadership of coach Jeff Long and won the division five straight years coming into this season.

A 1-0 win by Wesson over Franklin County on Jan. 4 opened the door for Loyd Star to take first place though. That victory for the Lady Cobras broke a 43-match win streak for Franklin County over division opponents.

The last loss for Franklin County in region action came on Jan. 19, 2016 against Loyd Star.

Loyd Star coach Jordan Lea and his team finished third in the region last season, his first as head coach at the school.

Lea returned much of his roster this season and the Lady Hornets have had a year to remember. Other than the loss to Franklin County, the only other defeats this season for Loyd Star were a 4-1 loss to 6A Terry High and a 2-1 setback at 4A Purvis High.

Monday, Loyd Star went up 1-0 early on a Mary Claire McCurley goal. McCurley is a junior and is the reigning Daily Leader All-Area MVP after scoring 32 goals in 18 games last season.

The go-ahead goal for Loyd Star came off the foot of sophomore Abby Burnette after Franklin County knotted the score at 1-1 in the second half.  Burnette is second on the team with 19 goals this season.

Franklin County ramped up the pressure late in the game as they pushed more players forward in an attempt to tie the game.

Senior Emma Britt picked up the win for Loyd Star as she recorded seven saves for her team as goalkeeper.

Britt, Brooke Cade, Wednesday Warren, Macy East, Aleigha Price and Emily Douglas are the Loyd Star seniors. Lea says their attitude and effort has a big impact on the team and the strong cohesion within the group.

“The greatest strength of this team is their unselfishness,” said Lea. “This group doesn’t care who’s scoring the most, who gets the most assist or who has the most steals. All they care about is winning and playing for each other. They don’t want to let each other down and to me, that’s the greatest difference in this year’s team compared to other teams I’ve been able to coach in the past.”

Loyd Star still has four regular season matches remaining and three of those are against region competition. They’ll face West Lincoln on the road Thursday before playing at Brookhaven High in a non-division match on Monday.

The Lady Cobras play at Wesson on Jan. 20 and host Hazlehurst on Jan. 21 for the regular season finale.