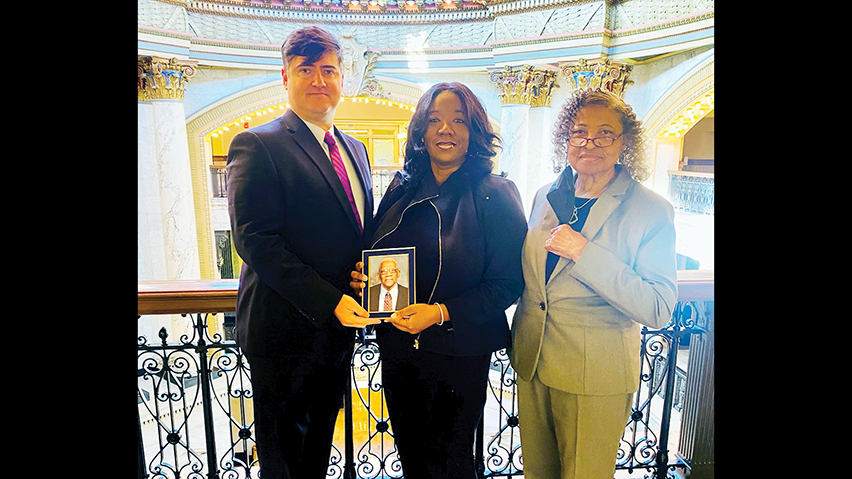 Photo submitted Longtime Brookhaven educator, coach, police officer and school board member Willie “Doc” Harrison was remembered Jan. 12 at the Mississippi Senate, where a proclamation was issued in his memory and honor. From left, Sen. Jason Barrett of Brookhaven, who initiated the proclamation, Harrison’s daughter Dr. LaRenda J. Harrison and his wife, Clementine.

The Mississippi Senate honored the life of Brookhavenite Willie “Doc” Harrison this week with a proclamation in his memory and honor.

Initiated by Sen. Jason Barrett, of Brookhaven, the proclamation was presented to Harrison’s wife Clementine and their daughter, Dr. LaRenda J. Harrison.

Harrison was one of Brookhaven’s first two African-American police officers, hired in the early 1960s.

He also taught and coached at J.E. Johnson Institute in Prentiss, then Brookhaven High School in 1971. Then in 2008, he was appointed to fill a vacated seat on the Brookhaven School District’s Board. He retired in 2020 after 12 years on that board and close to 50 years working for the schools.

“‘Doc’ was a well-respected icon in our community and a mentor to many. He loved Brookhaven and had a positive impact on local residents through his decades of dedicated public service,” Mayor Joe Cox said following Harrison’s death in October. “He was a top-drawer, effective leader and a man of character who was guided by wisdom and who demonstrated fairness to all. Doc’s legacy will continue for generations to come and he will be greatly missed.”

“He had so many accolades (including) Citizen of the Year,” his daughter said. “He was just an awesome, amazing human being that God blessed us with. He was just good.”

Sen. Barrett said the Senate adjourned to pause in memory of Harrison when the proclamation was presented.Senate honors Brookhaven leader