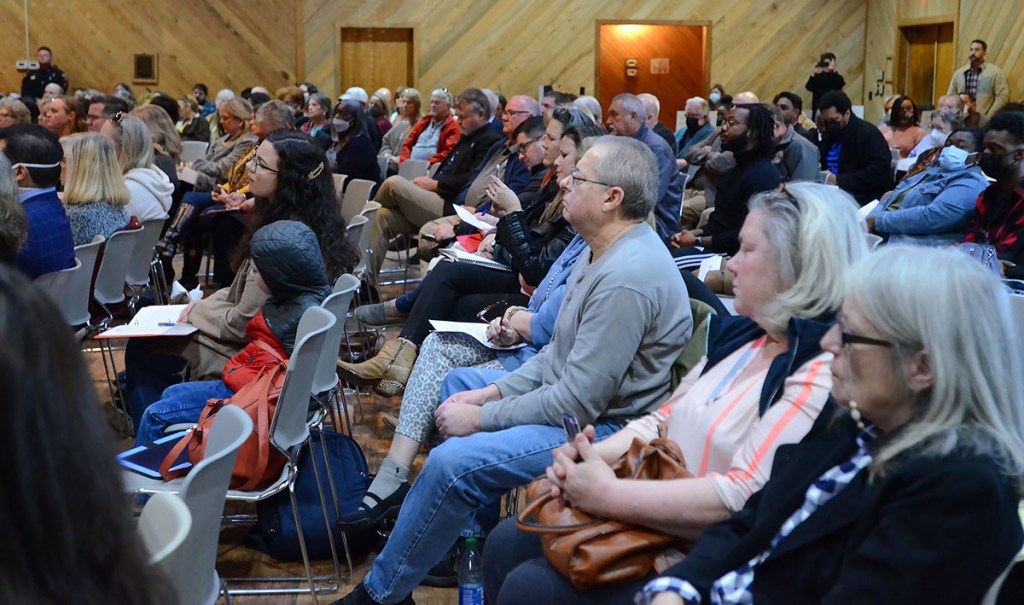 Educators, parents and other members of the community attended a public comment hearing concerning proposed changes to academic social studies standards. The hearing was held at the Sparkmann Auditorium in Jackson, Friday, Jan. 28, 2022.

Hundreds of people gathered at the Mississippi Agriculture and Forestry Museum on Friday morning to share their opinions on potential changes the Mississippi Department of Education is making to the state’s social studies standards. The pushback was so strong that the department announced it was walking back much of the proposed changes.

Last month the State Board of Education began the process to revise Mississippi’s K-12 social studies standards and received passionate feedback on social media. The department periodically updates the standards following feedback from teachers, with the last revision occurring in 2018. MDE said teachers felt some standards needed more clarity while others had excessive examples, leading to the 2021 revisions.

The proposed changes  remove many specific names, events and details in lieu of more broad descriptions. Some people were concerned by the removal of the names of specific civil rights leaders like Martin Luther King Jr. and Medgar Evers, and others felt the new standards incorrectly referred to the United States’s model of government as a democracy instead of a constitutional republic.

At the beginning of the hearing, MDE officials said based on the feedback they had already received, they would not be removing the lists of examples from the standards, including lists of names, organizations, and legislation and court cases.

Marian Allen, executive director of the Laurel-Jones County Black History Museum, said she came prepared to make a lot of persuasive arguments, but “we’ve already clarified that the people’s names will not be stricken from the standards, so he has really saved me a lot of time.”

Angela Broussard said when she reviewed the standards, “it became clear that the basic tenets of family, our nation’s founding documents, our nation’s true history and the development of a healthy patriotism was selectively and calculatingly removed …The earliest days of our nation were framed upon the premise that people were taught to adhere to the word of God as a light to the path and a boundary to be governed by.”

The audience responded with loud applause after Broussard spoke.

Several speakers addressed their issues with critical race theory, including Sen. Michael McLendon, R-Hernando, who is the author of a Senate bill that would prohibit teaching the subject. McLendon said his bill ensures that no child will be told they are “inherently superior or inferior” based on any demographic information.

Others spoke about the importance of ensuring specific instances of racial discrimination throughout Mississippi’s history are included in the standards for students to learn about and discuss.

Alexandria Drake, a U.S. history teacher at JPS-Tougaloo Early College High School, brought about 10 of her students to observe the hearing. When asked what they thought, her students discussed some people straying from the standards in their comments, and the importance of respecting all religions in a public school setting.

“I have been really disgusted today because I have seen and heard so much hatred,” said Ivory Phillips, dean emeritus at Jackson State University, who has been teaching since 1963. “ I was hoping that we were coming more and more together.”

The proposed revisions were put out for public comment when the state Board of Education approved them last month, and anyone can submit their opinion on them. To submit in writing, mail to Jen Cornett at 359 N. West Street, Post Office Box 771, Jackson, MS 39205-0771, or email jcornett@mdek12.org.  The deadline to submit is 5 p.m. on Feb. 4. Public comments will be presented to the board for discussion at the March 17 board meeting.