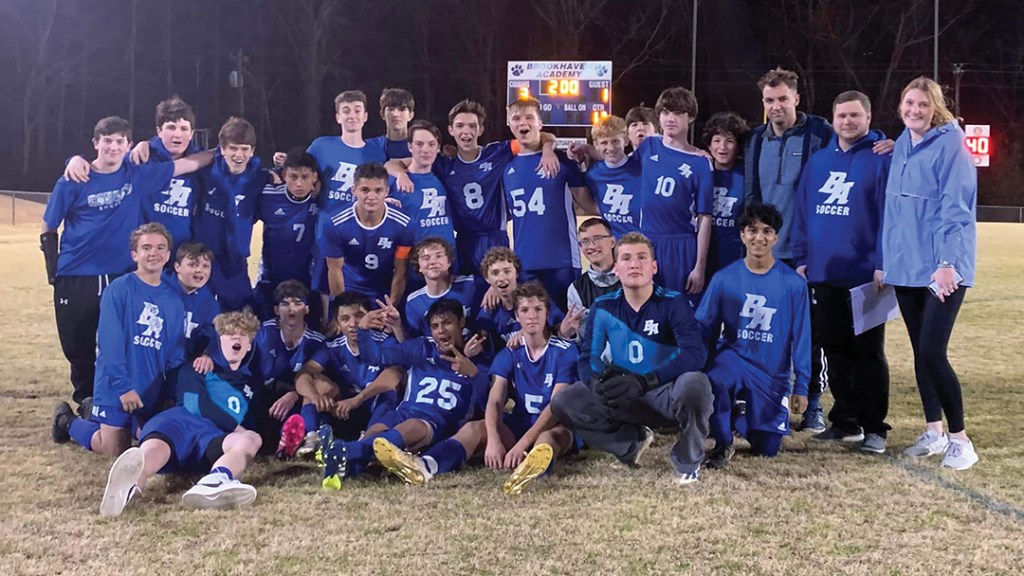 Photo Submitted The Brookhaven Academy soccer team celebrates after beating Copiah Academy 3-1 on Tuesday. The Cougars were scheduled to host Cathedral School on Thursday, but that game has been postponed due to rain.

Brookhaven Academy will be in the MAIS soccer playoffs when they begin later this month. Whether the Cougars go in as the No. 1 seed or No. 2 seed from their region is still to be determined though.

The Cougars locked up one of those top spots with a 3-1-win Tuesday on R.M. “Red” Stuard Field against their rivals from Copiah Academy.

The Cougars and coach Alex Brown are 16-1 and in the midst of the greatest soccer season in the history of the school.

The team was scheduled to host Cathedral today for a match at 5:30 p.m. and wrap up regular season region play with a home match at the same time on Feb. 8 against Oak Forest Academy.

However, the Cathedral game won’t be played on Thursday due to the cold, wet weather that’s affecting the area.

The only loss for the Cougars this season was a 2-0 setback on Jan. 25 at Copiah.

The teams both have one loss in division play and have split their head-to-head matchups. The next tiebreaker is head-to-head goal differential — which is also knotted at two after CA’s 2-0 win and BA’s 3-1 payback.

The next tiebreaker in establishing who’s in first place is head-to-head goals allowed — which is also tied at press time at three goals for each school.

Who finishes as the first or second place team is sort of academic, because the teams will almost certainly meet again in the second round of the playoffs with a berth in the MAIS Division II championship match on the line.

The Cougars and Colonels play in the South Region along with Cathedral, Oak Forest and Adams County Christian School.

Copiah — 12-1 overall after the loss on Monday — has beaten St. Joe twice and Central Hinds once during the regular season.

The action Monday was physical from the first whistle until the final play.

Both teams had large crowds supporting them and both of those groups of fans decried nearly every call or no-call that went against or for their team.

There were a combined 10 yellow cards handed out in the first meeting between the schools and Monday saw each school issued two apiece in that match.

Copiah’s calling card this season has been defense and prior to Monday, they had not given up a goal to a division opponent and had only surrendered a combined four goals on the season.

Brookhaven Academy senior forward Corey Case scored all three goals for BA in the win and his first score, in the early minutes, gave the Cougars confidence in their game plan.

“We as a coaching staff made a couple mistakes the first time against Copiah,” said Brown. “We got back in and reviewed the film and saw a couple things that we could change for our advantage. We actually moved six different people into new positions tonight and ran a formation that we hadn’t used before now. That’s what we’ve been working on since the last time we played them, and it came down to the boys executing all of that tonight — they played hard and Corey’s early goal really got us going.”

The second goal for Case came with 15 minutes remaining in the first half. A long pass from the defensive end via the foot of BA senior Sam Smith was gathered by Case just outside the box.

Case brought the ball down from his chest to his foot, held a Copiah defender on his hip and waited for the CA goalkeeper to commit defensively. Once the keeper made his move, Case used a hard shot with his left foot to keep the ball low and just past the outstretched hand of the goalie.

Early in the second half Copiah got on the board when their senior forward Caden McCullough blasted a hard struck ball that curved into the goal.

That amped up the anxiety for the Cougar faithful that knew their team needed to win by at least two goals.

Case quitted those fears just five minutes later when he capped the hat trick with a goal that was very similar to his previous one, this time the assist came when junior Enrique Hernandez took the attention of the defense and freed Case up to make a run at the goal.

Enrique Hernandez leads the team with 21 assists and his speed with the ball gave the back line of the Copiah defense fits most of the night. Senior Yosvin Hernandez is usually the leading goal scorer for the Cougars, but he now trails his younger brother Yojan in that category. A freshman, Yojan has scored 26 goals on the year thus far while Yosvin has notched 23.

Yosvin Hernandez spent most of the match against Copiah on the defensive half of the field as he mirrored McCullough when Copiah’s leading goal scorer — 27 on the season — had his foot on the ball.

Yojan Hernandez worked mostly in the midfield as he looked to get the ball forward to Case, Alexander and his cousin Enrique.

“Copiah’s a tough team and they’re really well coached,” said Brown. “We knew it would be a full 80-minute game. I think they’ve got 15 seniors on their side, so they’ve got some guys that have been there and done that. Very proud of how we played the game the way it’s supposed to be played in getting this win.”