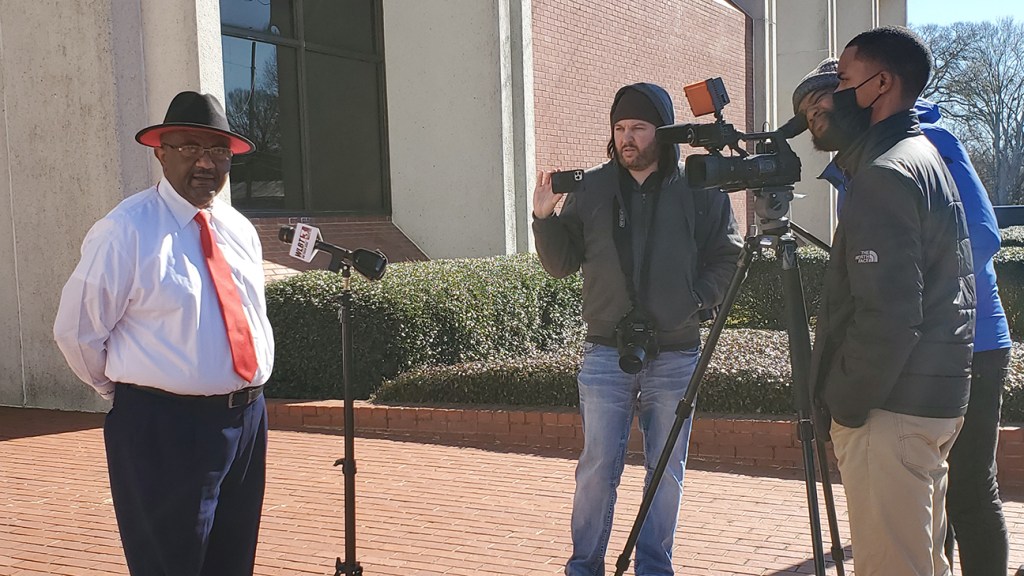 The Brookhaven NAACP and the family of FedEx driver D’Monterrio Gibson are asking for the resignation of Brookhaven’s mayor, chief of police and others.

Brookhaven NAACP President Rev. Rico Cain made the statement after the close of a brief press conference Saturday afternoon on the steps of the Lincoln County-Brookhaven Governmental Complex.

Cain said incidents of racism have happened in the city “over and over again” and “some of those problems have been involving the Brookhaven Police Department.”

Cain was the only person present for the NAACP-called press conference, though state and national NAACP leaders were expected to attend, along with Rev. Al Sharpton, members and leaders of the Black Panthers, and Gibson and his attorney Carlos Moore of The Cochran Firm.

Cain said the anticipated large presence of law enforcement at today’s conference — more than a dozen at the complex and more visible in the downtown area — and throughout the city led others to reschedule the conference to another date in the interest of public safety.

“We’ve had some people to actually canvas the grounds for the last couple of hours, doing different counts in different areas of law enforcement here in Brookhaven the last little while, and the police officers you see now, and law enforcement officers you see now are not the only ones,” Cain said. “There are many more on standby all around different corners, different buildings, waiting for something to construe. But we would not be here to day if it was not for the slackness of the police department.”

Cain said many citizens of Brookhaven would love to tell their stories about how they have been affected by racism in the city. These people chose not to be present at the conference, however, due to fear they “would be penalized at some other time,” he said.

The real issue, Cain said, is that both black and white people in Brookhaven feel that had the FedEx driver been black and the shooter been black, the results would have been different.

Gibson, 24, had delivered a package to an address at the Junior Trail NE residence of the one of Cases, Cain said, when Gregory Case, 58, attempted to block his truck from leaving by using his own vehicle, and Brandon Case, 35, stood in the road with a firearm. When Gibson pulled past both of the men, they pursued him as far as I-55, with the younger case shooting repeatedly into the vehicle.

“The consequences would have been greater than what they are now,” he said.

He said these people feel the only reason the Cases turned themselves in was out of fear of retaliation.

Gibson’s attorney Moore said Friday that hate crime charges are warranted for the cases, and he wants “both of them charged with attempted murder.”