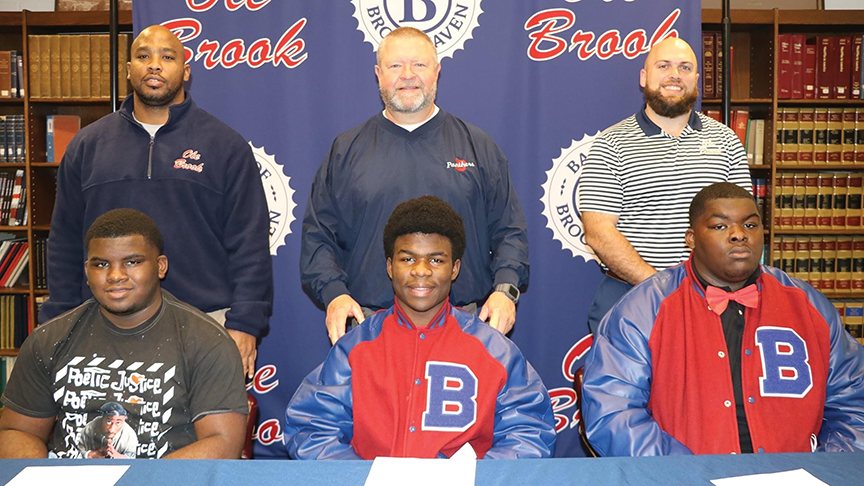 Defensive tackle Caleb Harris and defensive back Javonta Stewart are both headed to East Central Community College in Decatur, while linebacker Marvis McDaniel will next play for the Mississippi Delta Trojans in Moorhead.

The trio join two of their teammates who’ve already signed and enrolled at their schools, quarterback Dre Ross with Copiah-Lincoln and offensive lineman Zerian Hudson with Mississippi Gulf Coast.

Harris was the 2021 Daily Leader All-Area Most Valuable Defensive Player after having a dominate season on the BHS defensive line.

Ole Brook head coach Tucker Peavey thinks that there are many more years of football ahead of Harris if that’s what he desires.

“If he keeps working and sticks with it, he’s a guy that’s going to get plenty of opportunities with his size and abilities,” said Peavey.

Former BHS wide receiver John Hilbert played at East Central for the last three seasons before moving on to sign in Dec. with the University of West Alabama.

Receiver is the position that most BHS fans would associate Stewart with as he led the Panthers in every pass catching category for the last couple seasons. Stewart averaged 22.6 yards per catch and scored nine touchdowns while earning Daily Leader All-Area honors for a second consecutive season.

Stewart also was tops on the team with three interceptions in 2021 and plays the game with a physicality that will make for an easy transition to playing defensive back full time.

“Javonta is an everyday guy,” said Peavey. “He’s going to show up every day and do exactly what you ask him to do. He was very reliable for us and I expect him to bring that same type of leadership to East Central.”

McDaniel played linebacker for the Panthers and had 38 tackles in 2021. He also was part of five tackles for a loss and made three sacks for Brookhaven High during his senior campaign.

In McDaniel, Peavey says Delta is getting a piece they’ll be able to use in multiple spots.

“Marvis is a big, strong kid and he’s still growing and getting bigger every day,” said Peavey. “He’ll likely be someone that can help them on the defensive line because of his combination of size and quickness.”