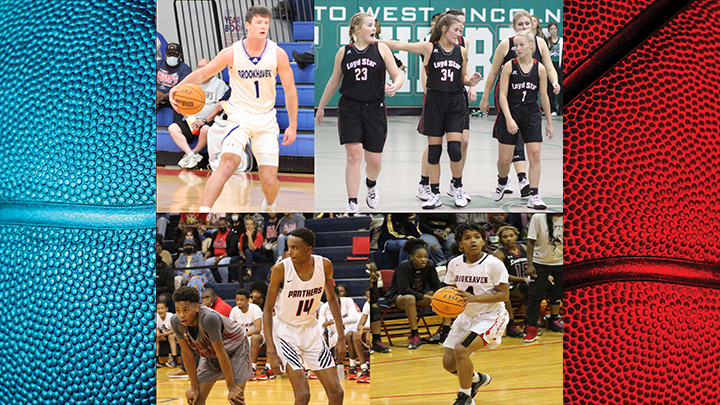 Daily Leader file photos / The basketball postseason begins this week for all of the area high school teams in both the MAIS and MHSAA.

The region tournament in Liberty runs Monday, Tuesday and Thursday of this week for Bogue Chitto, Loyd Star and West Lincoln.

The Bobcats won three regular season meetings between the schools, including a 48-41 win on Jan. 25. West Lincoln did lead late when the teams played on Jan. 7, but a Devonta Thompson 3-pointer at the buzzer gave the Bobcats a 42-41 win. The winner moves on to play top seeded Amite County (14-6) in a semifinal game Tuesday at 7:30 p.m.

The winner in Monday’s girls’ matchup between Amite County (1-18) and East Marion (11-13) will move on to face the top seeded West Lincoln Lady Bears (15-8) in the semifinals on Tuesday at 6 p.m.

The girls’ consolation game is set for 3 p.m. on Thursday while the championship will be played at 6 p.m. that night.

Copiah Academy in Gallman is the site of the MAIS 5A South State Tournament this week as games will be played Tuesday, Wednesday, Friday and Saturday.

Both Brookhaven Academy teams play Wednesday in opening round games.

At 6:30 p.m., the Brookhaven Academy girls’ team takes on Cathedral School of Natchez. BA is the No. 1 seed out of District 4 with an 8-0 mark against division foes and a 31-3 record overall for coach Ron Kessler.

Cathedral is the No. 4 seed from District 3 and is 9-17 on the season. BA blew out Cathedral 67-19 when the teams met on Nov. 23 in Brookhaven. A win moves BA on to the semifinals that will be played Friday at 4 p.m. against the winner between Central Hinds and Silliman Institute.

The BA boys’ team led by coach Josh Watts heads into the tournament as the No. 2 seed from their district. The Cougars have a 12-16 overall record and were 7-1 in division play this season.

The first-round opponent for Watt’s squad is the homestanding Copiah Colonels. The Colonels beat BA 37-35 on a long buzzer-beating 3-pointer earlier this season, but BA got a measure of revenge with a win in Gallman last month.

Brookhaven Academy alum Drake Flowers coaches both Copiah Academy basketball teams. The winner between BA and CA will play the winner of St. Joe-Madison and Bowling Green in the semifinals at 5:15 p.m. on Friday.

The four-team region tournament between Brookhaven High, Florence, Natchez and West Jones will be played on Tuesday, Feb. 8 and Friday, Feb. 11 of this week.

The winner of each bracket earns a first-round bye in next week’s MHSAA 5A state tournament. The loser of the consolation games will be eliminated and see their season end.

The BHS girls hit the court Tuesday at 7 p.m. to take on Florence (11-9). The Lady Panthers are 20-4 overall and were 5-1 in division play during the regular season. They beat West Jones 64-63 at home but lost 53-41 on the road to finish in second place behind WJ.

The consolation games begin at 4 p.m. on Friday and precede the championship pairings.

Enterprise coach Shane Adams — who leads both the boys’ and girls’ teams — and the Yellow Jacket fans would have likely preferred if this week’s tournament had been played at Salem Attendance Center in Walthall County.
After some confusion over that issue last week, the MHSAA ruled that the tournament will be hosted by Richton this week, which is a considerably longer drive for the Jackets (111 miles) compared to a trip to Salem (28 miles).

Both EAC teams are slated to play in first round games today with the girls taking the court at 5:30 p.m. and the boys’ game to follow.

The Enterprise girls are 10-7 overall and were second in the region with a 3-3 mark during the regular season. Richton (7-13) is the first-round foe for Enterprise and the teams had two tight finishes both times they played this season.

Adam’s team won 29-25 at home on Jan. 11 and Richton got payback with a 37-36 win on Jan. 28. There are only four teams in the region and Enterprise will play in either the consolation (Thursday, 5:30 p.m.) or championship game (Friday, 5:30 p.m.) regardless of how things shake out against Richton. Lumberton and Salem meet in the other first round game.

For the EAC boys’ team, their first-round matchup tonight against Salem is the win or go-home variety. Enterprise got a forfeit win over Salem when they were first scheduled to play the Wildcats. Salem won 65-55 on their homecourt when the teams played on Feb. 4.

Salem is coached by Tanner Allen, who played basketball for EAC before finishing up at Wesson. The winner between Enterprise and Salem moves on to face Resurrection Catholic in a semifinal game Tuesday at 7:30 p.m. Richton and Lumberton are set to meet in the other semifinal.

Both Wesson squads face Jefferson County in first round, elimination games on Tuesday in Woodville.

The Wesson girls play first at 7 p.m. and will precede the boys’ game. Coach Michelle Nunnery’s Wesson girls’ team is 15-8 overall and went 6-4 in division play. The Lady Cobras swept Hazlehurst, Wilkinson County and Jefferson County in the regular season and were swept by the top two teams in the division, Franklin County and Port Gibson.

The winner between Wesson and JC moves on to face Port Gibson on Thursday at 4 p.m. The consolation and championship games will be played on Friday beginning at 4 p.m. Franklin County (19-4) is the No. 1 girls’ seed after going 10-0 in the region.

Coach Rusty Newman’s Cobras are 7-14 and went 2-9 in the region during the regular season. The Wesson boys lost 90-82 to Jefferson County at home in double overtime and 78-47 in Fayette on Jan. 21.

The winner between Wesson and Jefferson County moves on to face Franklin County in the semifinals.

Both Lawrence County High teams are slated to play in the semifinal rounds of the Region 7-4A Tournament on Thursday in Purvis.

First-year girls’ head coach Candice McDuffey and her team are the top seed after going 8-2 in division play. The Lady Cougars are 14-9 overall and await the winner between Sumrall and Forrest County AHS in a game to be played Thursday at 4 p.m. Sumrall did beat LC 51-41 when the teams met a second time this season on Jan. 11. The championship and consolation games will begin at 4 p.m. on Friday, Feb. 11.

Lawrence County coach Pat Bridges and his boys’ team are 17-8 overall and were 9-1in region games. The Cougars and Forrest County AHS split their two regular season meetings. Bridge’s team will play the winner between Sumrall and Purvis in a semifinal game on Thursday at 8:30 p.m.