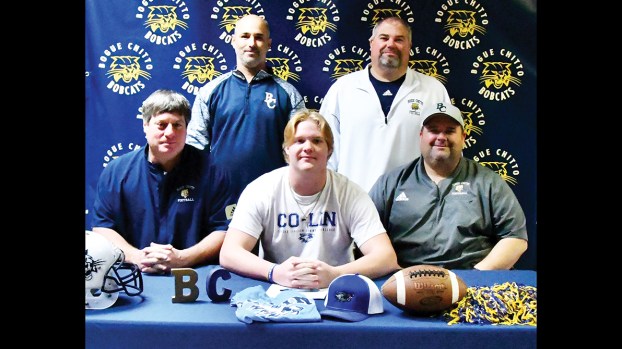 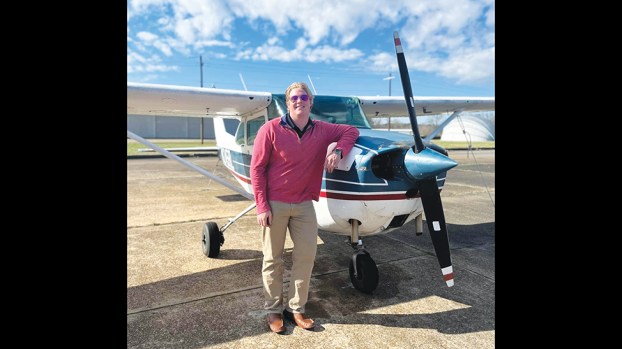 Photo submitted The 18-year-old son of Jeff and Kathy Cupit, Eli received his pilot’s license on Jan. 8 and signed with CLCC football on Feb. 2.

Chances are, Bogue Chitto senior Eli Cupit has been busier than you thus far in 2022. Over the weekend, Cupit finished in first place in the 242-pound division at the Region 4-2A Powerlifting Meet.

Cupit benched 250-pounds, squatted 485-pounds and deadlifted 560-pounds in getting to top spot on the podium for the Bobcat lifters and coach Chad Norton.

Last Wednesday, Cupit signed a letter-of-intent with Co-Lin as he’ll head to Wesson as the future long snapper for Wolf Pack football.

And last month, Cupit cleared his final hurdle in getting his pilot’s license. Before going to baseball practice Wednesday, he talked about what his busy year has been like thus far.

“I had heard that Co-Lin was going to come watch me snap during the season,” said Cupit. “They came back and watched me a second time and soon after that they offered me.”

Cupit didn’t realize that his snapping skills were good enough to earn him a roster at the college level, but now that he’s signed up, he’s ready to give it his all.

“Coach Glenn Davis came in and offered me and I’m excited about really focusing on snapping and seeing how much better I can get at it,” said Cupit.

A love of what’s challenging is also what drew Cupit to flying — that and his grandfather.

“When the pandemic first started and we were all sent home for quarantine in 2020, I ended up going to Missouri to spend time with my grandfather,” said Cupit. “His name is Larry Gregory and he’s been flying for around 20 years. He’s also got a license to work on planes. I got to spend all day, every day with him around planes when I was up there.”

Eli’s parents are Jeff and Kathy Cupit. After making a few more trips to spend time with his grandfather, the idea of him getting his pilot license came up at dinner one night.

“We were at a nice restaurant, having a meal before we came back to Mississippi and my grandfather asked me if flying was something that I wanted to purse,” said Cupit. “The challenge of it is what I enjoy the most. You’ve always got to be thinking about what’s going to happen next and you’ve always got to have a solid plan.”

The plan to getting a pilot license led Cupit to Hawkins Field in west Jackson. That’s where he’d drive to meet with Langley Nelson, his flight instructor.

Cupit needed a minimum of 40 hours flight time and ended up with 52 hours before he took the final part of his test. There is a written test, an oral exam and a practical flying exam that takes place during the process.

These aren’t the type of tests that you just wake up on a Wednesday and decide to take. Preparing meant Cupit had to put in some series study time.

“For about a year I prepared for the written test,” said Cupit. “I’d wake up early and get an hour of studying in before school on a program that helps you prepare. I spent nights falling asleep watching videos on test preparation.”

All that studying was fit around the usual life of a high school senior that plays multiple sports. Cupit started on both the offensive and defensive line for an 8-3 Bogue Chitto football team and coach Gareth Sartin as a senior in 2021.

He was named Co-Lineman of the Year for Region 7-2A and was part of The Daily Leader All-Area Team.

Former Bogue Chitto lineman Darius Porter is the one who taught Cupit the ropes when it came to long snapping.

“Darius was a senior and I was a freshman when I started snapping,” said Cupit. “He got hurt and I ended up having to do it. I’ve learned a lot over the years. You generate your power from your legs and feet and having strong hands doesn’t hurt. I think powerlifting has helped me become a better long snapper over the last couple years.”

Last year Cupit finished third in the state in the 242-pound division at the MHSAA 2A State Powerlifting Meet. He’ll keep preparing as West Lincoln is slated to host the 2A South State Meet on March 5.

Between baseball, powerlifting, his quickly approaching graduation and his future as a member of the CLCC football teams — Cupit is one busy Bobcat. He’s also spending some time thinking about getting back into the air.

“Flying is something that I want to pursue as a career and possibly go to Louisiana Tech or Delta State since they have aviation programs,” said Cupit. “My grandfather has a plane that he’s working on right now that he’s going to let me fly in the future. He tried to prepare me for my first lesson, telling me the flight instructor was going to cut the engine when we got up to see how I would react. That’s the type of thing you can think you’re ready for, but when it actually happens — it’s hard to describe that feeling. That’s why you’ve got to have a plan, for when things don’t go like you expected them to go.”