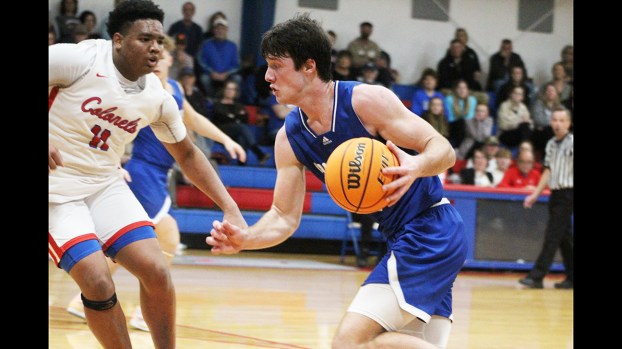 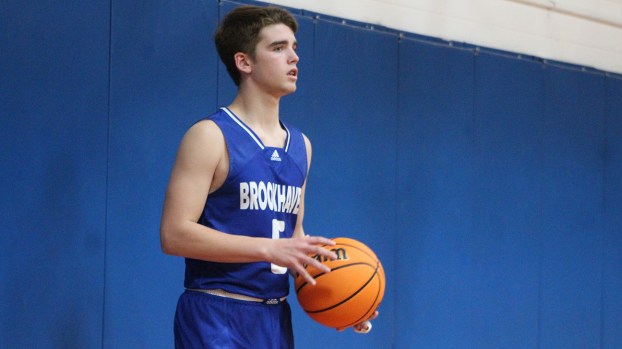 Photo by Cliff Furr Sophomore Hayden Adams had the hot-hand from deep as his corner 3-pointer tied the game up late for Brookhaven Academy against Copiah Academy. Adams finished with 22 points in the loss.

Brookhaven Academy sophomore guard Hayden Adams hid in the corner Wednesday and hit a huge 3-pointer that tied the game against Copiah Academy up at 61-61.

The large contingent of BA fans in Gallman roared with excitement when Adam’s shot dropped through as their team had battled back to even the score after being down eight points with 60 seconds left.That happiness was just a short respite though.

A foul on the ensuing inbounds sent CA senior guard John Macky Jenkins to the free throw line with 12 seconds remaining in the game. Jenkins knocked down both shots and BA couldn’t get off an attempt at the tie as CA escaped with a 63-61 in the first round of the MAIS 5A South State Tournament.

It was the second heartbreaker of a loss for the Cougars to the Colonels as CA won on a long buzzer beater at BA earlier this season. The loss on Wednesday ends the season for the Cougars (12-17) and qualifies Copiah for the MAIS 5A State Tournament next week at Brookhaven Academy.

The gym was packed with both schools sporting large, vocal student sections. The CA student section filled the stage behind one of the goals and Mackey led his teammates in a charge to that spot after the final buzzer sounded.

Mackey scored 17 points and Kamron Phillips led the Colonels with 19 points. Copiah didn’t really start rolling offensively until Phillips began to have success pushing the ball in transition after halftime.

Think of a metaphor for something being hot and that would still most likely fail to describe how on-fire Adams was to start the game.

Adams knocked down a 3-pointer, then a mid-range jumper and then another 3-pointer to put BA up 8-0. He hit four 3-pointers in the first six minutes of the game and had 19 points in the first half.

CA coach Drake Flowers used two early time outs to let his team know that not letting Adams catch the ball was of the utmost importance. The only clean-look that Adams got at the basket in the second half was his tying 3-pointer as he finished with 22 points.

It was the final career game for Brookhaven senior forward Tyler Fortenberry. Fortenberry is one of four seniors on the team along with Landon Banes, Dane Flowers and Carter Watson.

Tyler Fortenberry willed his team to stay within striking distance late as he moved to the point and drove the lane against slower or smaller defenders. He muscled in for a layup that made the sore 60-58 with 26.5 seconds remaining.

“We talked in the locker room pregame about how close our two games against Copiah this year were,” said Watts. “We knew the key would be controlling the tempo and we did that well in the first half for the most part, except when we started letting them get some breakouts right before halftime. They kept that up in the third quarter and then in the fourth quarter — it kind of went back and forth.”

Watt’s team played a killer schedule, especially in their pre-Christmas slate of games. They had two games against a Simpson Academy team that’s 26-3 and a favorite in the 5A State Tournament next week. They also played 6A Hartfield Academy, 6A Parklane Academy, 6A Jackson Prep, 6A Jackson Academy, 6A Presbyterian Christian and a Madison-Ridgeland Academy squad that’s 30-5 and one of the best teams in the state, regardless of class or association.

“As a coach, you always want to see them get better by the end of the season than at the beginning and I can say this group did that,” said Watts. “There were times where I know they were frustrated with how things were going, but the boys kept working and when we got into our district games, it all started to click. I’m proud of that resilience.”

Copiah moves on to face St. Joseph Catholic today at 5:15 p.m. The other semifinal has Oak Forest Academy taking on Adams County Christian School at 7:45 p.m.