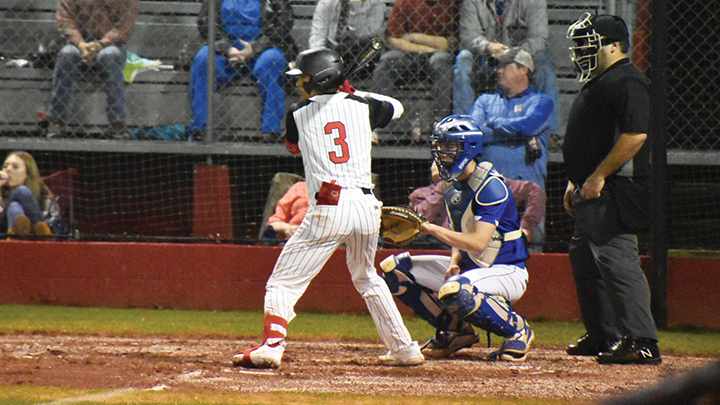 The Brookhaven Academy Cougars are 4-2 on the season after a Thursday night 10-0 win over Parklane Academy.

Coach Caleb Upton got a 10 strikeout, 5-inning win on the hill from junior pitcher Judson Griffin. Griffin walked none and gave up just two hits on 69 pitches.

BA used nine hits to score four runs in the first and six in the second inning. Junior Easton Boyte doubled for BA and senior Caston Thompson added a home run for the home team. Boyte, Trevor Fortenberry and Avery Griffin drove in two runs each.

Parklane had beaten BA 5-2 on Tuesday in Pike County. Upton’s team is back at home on Tuesday as they’ll host Copiah Academy for a 7 p.m. first pitch.

Coach Matt White’s Panthers spotted Enterprise an early 2-0 lead on Tuesday before the home team came roaring back to get an 8-2 win over the Yellow Jackets.

BHS leadoff hitter Jake Meilstrup had a four-hit night and drove in two runs. Senior pitcher Maney Miller got the win for the Panthers as he struck out 15 and walked two.

Brookhaven High is scheduled to play at Bogue Chitto today at 1 p.m. and at Wesson on Tuesday.

It was the first game of the season for Garrett’s bunch. They’re scheduled to host Natchez today at 3 p.m. and West Lincoln on Tuesday.
Bogue Chitto

Salem got a late run to knock off Bogue Chitto 6-5 on Tuesday. The loss dropped coach Gareth Sartin’s team to 2-2 on the season.

Colten Bales drew the pitching start for BC and struck out 10 in six innings. Tucker Kyzar and Tripp McCaffrey each hit a double for the Bobcats and Tyler Bowers drove in a pair of runs for the team.

Tanner Wilson and Blake Wilson each also drove in a run for Bogue Chitto.

Loyd Star moved to 2-1 on the young season after outlasting Wesson 9-8 on Tuesday. The loss put Wesson at 1-2 for second year head coach Vance Windom.

LS coach Jared Britt saw his team lead 2-0, trail 3-2 and then lead 6-3 again. The game was tied at 8-8 after six innings before Loyd Star won it in walk-off fashion.

Junior Garret Carwyle had the go-ahead hit for the Hornets as Loyd Star had nine hits as a team and Wesson had seven. Both Riley Easterling and Dawson Hester drove in two runs each for LS while Wesson got two RBIs apiece from Brett Boutwell and Preston Selman.

Both teams used three pitchers apiece as Britt went with Easterling, Hester and Craig Bass on the hill and Windom countered with Boutwell, Preston Selman and Gabe Selman.

The Bears and coach David Gilbert are 2-1 with two blowout wins over South Pike thus far in 2022. Tuesday, West Lincoln won 25-4 in Magnolia.

WL needed only 12 hits to score 25 runs as Brady Ratcliff and Taylor Myers appeared on the mound for the Bears.

West Lincoln is scheduled to play at Enterprise on Tuesday.