The Mississippi High School Activities Association (MHSAA) and Mississippi Ag Commissioner Andy Gibson should be applauded for dressing up the basketball state championships held each year at the Mississippi Coliseum.

The facility looks better than it has since it was newly built, and the MHSAA has improved the production value of the event that showcases the best high school basketball teams in the state.

Unfortunately for West Lincoln fans on Tuesday morning, their Bears (20-9) fell behind early on the big stage and never recovered in a 39-18 loss to Belmont (27-5) in the MHSAA 2A state semifinals.

West Lincoln didn’t score a field goal until nearly midway through the second quarter. A Ramsey Hall jumper off a deflection made the score 22-4 and would be the only made field goal of the first half for West Lincoln.

Many of the early miscues looked like nerves for West Lincoln. Balls bounced too high and fumbled passes went for turnovers as the team looked jittery for the 9 a.m. start.

Most of that had to do with their opponents though as Belmont is a longtime girls’ basketball power.

Located in Tishomingo County, the Cardinals have won 12 state championships in girls’ basketball and won the 3A state title last season before dropping down to the 2A ranks this season.

Two of the top five scorers off that championship team returned this season for Belmont including senior wing Mary Grace Storment who averaged 14.3 points per game last season on a 31-3 team.

With the 5-foot-9 Stormant on one wing, 5-foot-9 sophomore Brooklyn Hodum on the other wing and 6-foot senior center Kalea Koger inside, the Cardinals had advantage in size and physicality.

Whether it be high school, college or pro basketball — officials let teams play a more physical style as the season progresses and Belmont played a strong man-to-man defense that had them denying passes to the wing and challenging shots inside with extended arms.

Freshman point guard Carlie Brock kept pushing the action in transition for Belmont as the Cardinal led 34-12 after three quarters.

Rayleih Guin led Belmont with 14 points in the win and Storment added 10 points.

West Lincoln is a team with no seniors. Head coach Alissa Adams wants her squad to be right back in this same spot in a years’ time as her Bears started five juniors on Tuesday.

“I told them that you’ve got to remember this feeling,” said Adams when asked what she told her team after the loss. “I told my husband that it’s hard to come to the Big House and win when you haven’t been here and this is just a taste for us, we want to be right back here next year.”

“We couldn’t get a shot to fall and a lot of that is about confidence,” said Adams. “We went over to Southern Miss on Sunday and shot in their coliseum to try and get some experience in a coliseum setting and we appreciate their coaching staff for letting us do that. It’s a different atmosphere and a different mentality at this point in the season and when you’re used to being here then you’ve got a legacy. Belmont has a legacy and West Lincoln is building one.” 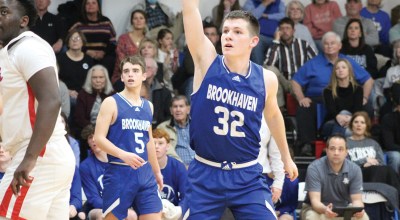 ‘Too big of a hole too early’: Comeback comes…