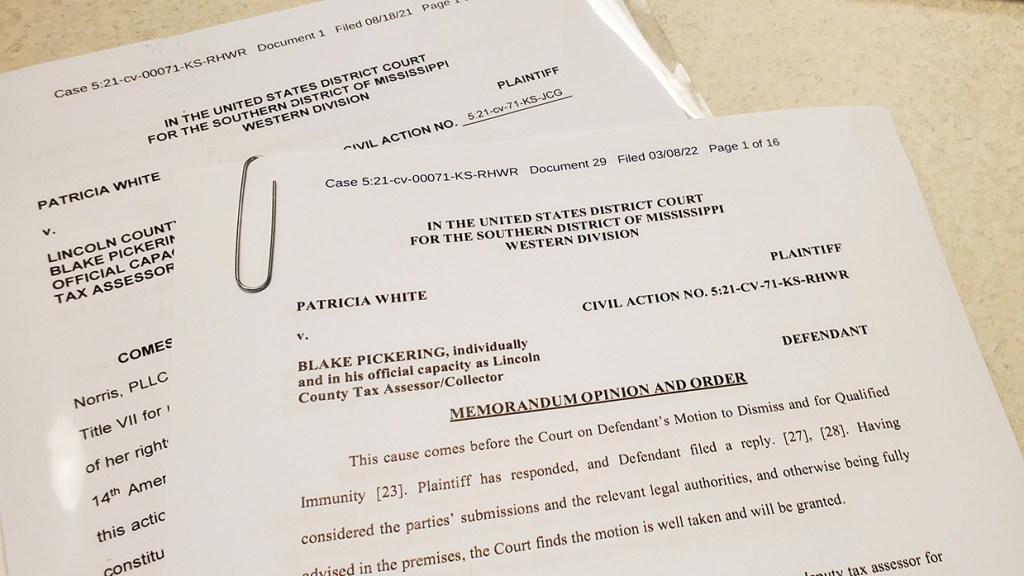 After the defendants filed responses and a motion to dismiss in November, White filed a second amended complaint, which dropped the county as a defendant, dropped Civil Rights Act Title VII claims and added allegations against her former supervisor.

In an opinion and order handed down Tuesday by U.S. District Court Judge Keith Starrett, White’s claim of sexual harassment was dismissed with prejudice — meaning she cannot file the same claim against the same defendant again in District Court.

Pickering had argued for dismissal on several grounds — that the allegations of sexual harassment were not sufficient for an actionable claim; that the retaliation claim was not recognized under the Fourteenth Amendment; that no claim had been stated against him in his official capacity; that he was protected by “qualified immunity” from civil liability except for clearly established constitutional violations; and for “various grounds” in regard to state law claims.

The court ruled that White had failed to state a Section 1983 claim — which would provide a person with the right to sue state government employees acting “under color of state law” for civil rights violations — in regard to sexual harassment and retaliation. Therefore, the other grounds were moot.

Judge Starrett ruled that the allegations did not show the terms and conditions of her employment had been altered, only that she had complained to others she felt uncomfortable regarding the defendant’s alleged viewing of pornography behind locked doors in his office. While the alleged conduct was sexual in nature, it was not the same as discriminating against someone based on sex, meaning gender. No allegations even implied that the alleged harassment was motivated by White’s gender, the judge said.

“Because Plaintiff has failed to properly state a claim for sexual harassment, via hostile work environment, … particularly after three attempts,” the ruling stated, “dismissal is appropriate.”

The claim of retaliation was also dismissed because it was filed under the Fourteenth Amendment’s Equal Protection Clause, which does not provide for such a claim.

White’s state law claims of intentional infliction of emotional distress and wrongful termination were not addressed because the Fifth Circuit Court’s general rule is to not exercise jurisdiction over pending state law claims if all federal claims are dismissed, Starrett wrote in his order. These claims were dismissed without prejudice, however, meaning White may file them in an applicable state court, if she so chooses.

Pickering had no comment on the ruling. White’s attorney did not return a call asking for comment.

The original suit can be read here and Judge Starrett’s Opinion and Order can be read in its entirety here.