The NCAA Tournament ushers in the best time of the year 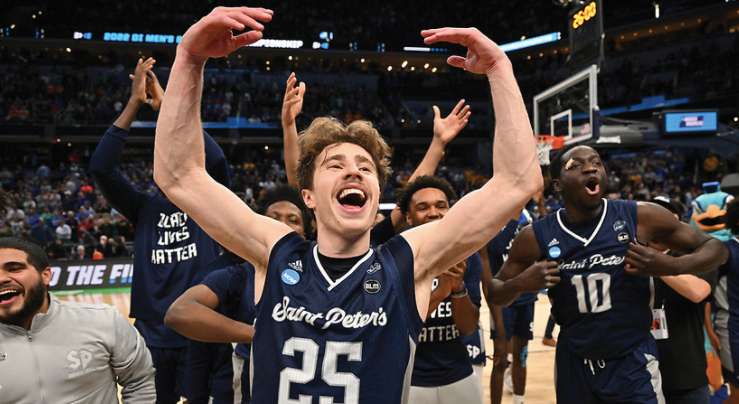 Photo by NCAA MBB Images The St. Peter’s Peacocks, including No. 25 Doug Edert, strut off the court Thursday after upsetting Kentucky in the NCAA Tournament.

Sorry, Andy Williams and Hallmark Christmas movie fiends, but March is the most wonderful time of the year — not December.

For over 12 glorious hours on Thursday through Sunday, March Madness takes over our televisions and captures the collected attention of the nation.

I’m writing this while on a weekend trip with my family out of town. We’re at a lake, but the weather isn’t the best and we knew that before we headed this way.

We brought board games and books to read and enough potato chips to feed a small army.

It’s a very lowkey trip and we made a pledge that no one would get stressed or uptight about anything — that was mainly for me — and we’d chill out by doing things that make us the happiest.

For this dad, that’s sitting on one of the couches and gorging on college basketball.

You don’t have to be a college basketball savant to love watching the tournament play out, especially over the first four days that encompasses the first two rounds.

What do I love the most about the tournament?

And be honest now, some of y’all love drama too. Why else are you still on Facebook if not for that?

A fun tradition we have in my little family of four is to have everyone fill out a bracket of who they think will win each game.

I read articles about each first-round matchup and try to pick a few upsets, especially in the games between five seeds and 12-seeds. My methodology is a little bit of research with a little bit of gut instinct mixed in.

My 13-year-old daughter simply humors us by filling out her bracket. She usually goes with the higher seeds and if she’s not sure of what team to pick, she might go with the logo that she likes the best.

The 10-year-old boy of the house likes to watch college hoops at home with me from time to time. He’ll find a team that he prefers and ride hard for them most of the season. He’s the captain of the Auburn bandwagon this season.

Watching my wife pick her bracket is a masterclass in deductive reasoning.

She’s a big fan of picking schools with “cool names.”

For that reason, she’s picked Gonzaga to win the national championship every one of our nearly 17 years of marriage.

Other “cool name” favorites of hers are Creighton, Xavier, Providence and Marquette.

How the coaches dress is another factor in her selections. For that reason, the natty dressing Nate Oates of the University of Alabama helped his team edge out Notre Dame in her bracket. ND head coach Mike Brey wears glorified sweats — she’s not a fan.

School colors, locations and mascots also factor into her reasoning.

She rides hard for Loyola-Chicago since their colors resemble the House of Gryffindor in the Harry Potterverse.

And don’t read this as me making fun of her — her bracket has bested mine plenty of times.

Somewhere on I-20 as we drove towards Alabama on Thursday morning, I talked her out of picking the biggest upset of this year’s tournament.

Is the mascot of Saint Peter’s a peacock, she asked?

Yep, it’s some place in New Jersey, I replied.

Gosh, she sighed. I want to pick them because how often do you see a team with a peacock for a mascot.

She finally settled on Kentucky though, picking one of the bluebloods of college basketball as I reminded her that UK has McDonald’s All-Americans while St. Pete would trot out players that eat at McDonald’s.

Fast-forward to later in the night and we were sitting as a family on the couch, living and dying with each shot late in overtime.

We cheered as a dude named Doug Edert nailed a long 3-pointer that helped spring the huge upset for no. 15 seeded St. Peter’s over no. 2 seeded Kentucky.

With his wispy mustache, the 185-pound Edert looked like he should be bussing tables at Betty’s Eat Shop instead cooking up jumpers from near half court.

The 85-79 overtime win for St. Pete’s was the type of upset that almost no one saw coming.

I knew I should have picked St. Peter’s, said the college basketball sage of our family. How can you pick against the peacocks?