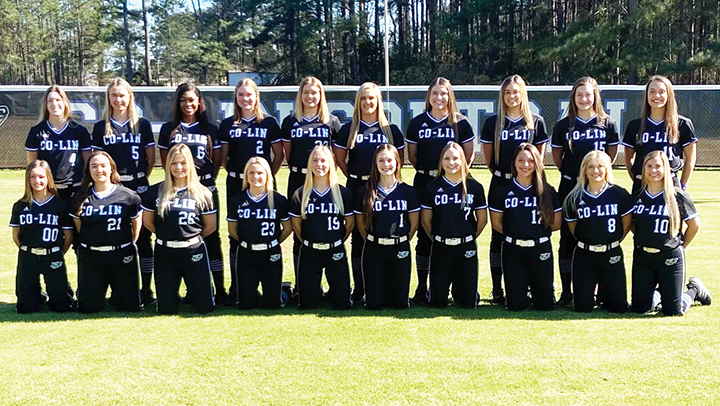 Photo by Co-Lin Sports Info Co-Lin is set to host Southwest in a huge MACCC softball matchup on Wed. in Wesson​. First pitch of the doubleheader is scheduled for 4 p.m.

Two wins Saturday over visiting East Mississippi moves the Copiah-Lincoln softball team to 20-2 on the season and 6-0 in MACCC conference play.

Weather permitting, Co-Lin is next scheduled to host Southwest Mississippi (16-1) on Wednesday in Wesson for a pair of games that will begin at 4 p.m.

Sophomore pitcher Cera Blanchard (Metairie, La.) pitched Co-Lin to an 8-0 win in the opener. Blanchard, a University of Southeastern Louisiana signee, is now 10-1 on the season.

Brookhaven High alum Madi Miller led things off at the plate for Co-Lin with a double and scored one of her teams two runs in the first inning. Miller has signed to continue her softball career next at Belhaven University.

Speedy sophomore outfielder Shelbi Maxwell (Wesson HS) showed off her wheels in the fifth as she reached via a bunt single, stole second, advanced to third on a groundout and then later stole home to put CLCC up 5-0.

The finale featured another strong pitching performance from freshman hurler Belle West in an 11-0 victory.

West allowed two hits in four innings and struck out six with one walk. The win in the circle moves the Hillcrest Christian alum to 10-0 on the season.

In the bottom of the second, West helped her own cause by swatting a solo homerun to put her team up 1-0. It was the third round-tripper of the season for West.

The Wolves pounded out 16 hits in game two and a pile of them were of the extra-base variety.

Southwest swept Coahoma (9-0, 13-1) on the road in its last time out. Brookhaven Academy product Madi Smith pitched the win for the Bears in game two and Bogue Chitto alum Kayci Beth Wallace had multiple hits on the day for Southwest coach Shea Johnson.

SMCC comes into the game ranked No. 17 and Co-Lin is ranked No. 3 in the latest NJCAA DII softball poll.