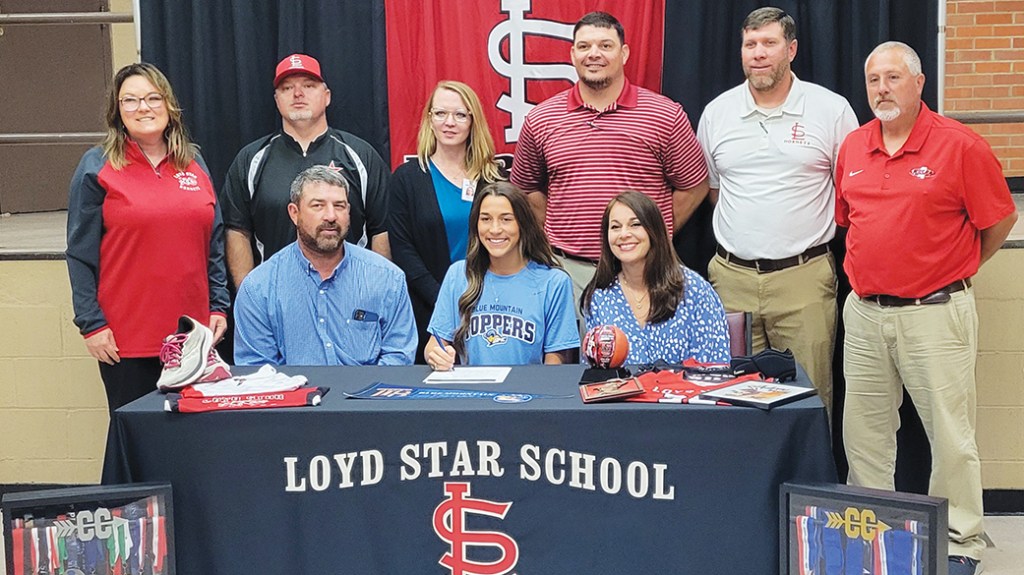 The collective communities that make up Loyd Star have been rooting for senior Aubrey Britt in athletic competitions since she was in junior high.
Her wins were their wins and it brought pride from Caseyville to California Road and all points in-between to know that one of the best distance runners in the state was one of their own.

Tuesday, Britt made the next move in her academic and athletic career by signing a scholarship to run cross-country and play basketball next year at Blue Mountain College.

Britt won her first MHSAA 2A state championship in cross-country as an eighth grader. She repeated as champion again as a freshman, sophomore and junior.

She finished far out of first place as a seventh grader and knew she didn’t want to experience that again.

Loyd Star cross-country coach Michelle Case has grown the program at the school over the last nine years. She’s hanging up her stopwatch as retirement looms at the end of the school year.

When Case is listing what makes Britt special, she’s not just speaking of her impact in athletics, but also in the fabric of the school.

“Mentor, role model, irreplaceable leader — those are just a few of the words that can describe Aubrey,” said Case. “She’s been a guiding light for every member of the cross-country team through her excellent sportsmanship and very compassionate nature to teammates and rivals alike.”

The medals from individual races won by Britt during her cross-country career make an impressive, heavy pile when you get them all together at once. Tuesday, they sat in shadow boxes alongside the table where she signed her letter-of-intent

Her running feats are more remarkable when you balance them with her achievements in basketball and softball.

A four-year varsity starter at point guard, Britt averaged 13.4 points, 5.2 rebounds, 3.7 steals and 2.6 assists per game over the course of her basketball career. She was recently named to The Daily Leader All-Area Team for a third straight year in basketball.

Britt has somehow also found time to play softball during high school and has shined there as well, winning All-Area Defensive MVP after her junior season. She’s currently batting second in the lineup for a Loyd Star softball team that’s 18-3 on the season for coach Scott Leggett.

Phillip Laney is in his tenth-year coaching women’s cross-country at Blue Mountain and the women’s basketball team is led by Tracy Rice. Rice is a former player at BMC and her first team in 2021-2022 finished with a 12-16 record.

Loyd Star girls’ basketball coach Seth Britt has seen the impact made by his point guard off the hardwood as a Huddle Leader for the Fellowship of Christian Athletes (FCA).

“Aubrey is a leader on and off the court,” said Britt. “She has the type of personality that draws everyone to her. She genuinely cares about everyone.”

Blue Mountain College is located in the small-town of Blue Mountain, which sits in Tippah County on the state’s northernmost border with Tennessee.

The school is a private college that’s supported by the Mississippi Baptist Convention. The school’s athletic teams are called The Toppers, as in hilltoppers, and compete at the NAIA level of college athletics.

The Toppers are members of the Southern States Athletic Conference (SSAC) which also claims William Carey University as a member. The SSAC is one of the deepest NAIA leagues in the nation as evidenced by member Loyola-New Orleans winning the NAIA men’s national championship this year in basketball.

Blue Mountain joined the league in 2013 and is one of the smaller institutions in the conference, but enrollment has now reached close to 1,000 students at the school, which is a significant gain made over the last decade.