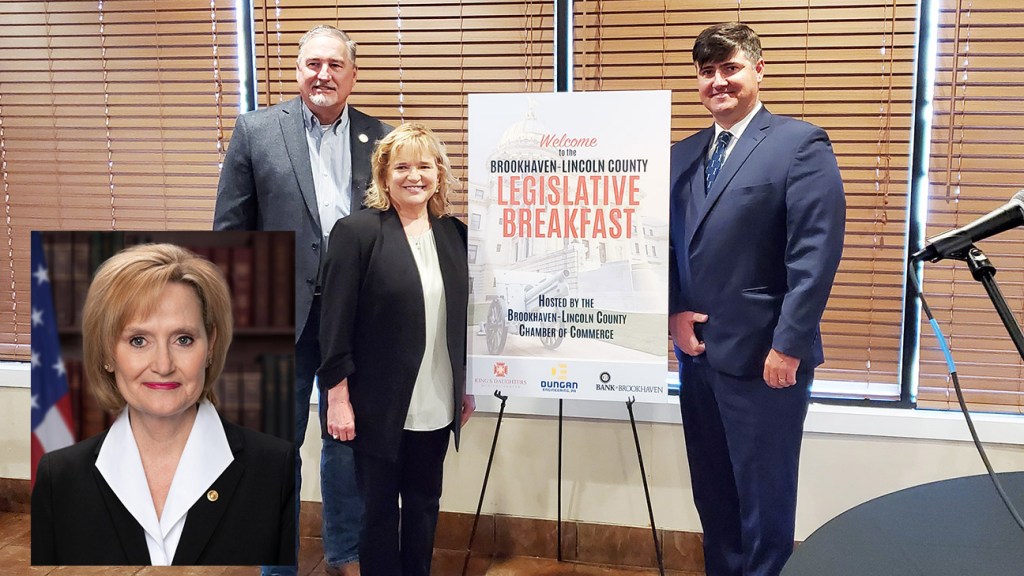 Hyde-Smith briefly addressed the community leaders gathered at the breakfast before heading on to other engagements. Currie, Mangold and Barrett also spoke to the group that included Chamber members in addition to city and county officials.

Hyde-Smith emphasized the work Currie had done to advance the Dobbs Case before the U.S. Supreme Court, lobbying to return to states the right to decide what is legal regarding abortions.

“I’m thrilled to be here and blessed beyond words to represent you,” the U.S. senator said. “You (Brookhaven) do so many things so well, you give me bragging rights.”

Rep. Currie also spoke on the Dobbs Case, saying it was an attempt to ban abortions after 15 weeks since conception, and that an outright ban “would have never made it.”

“We had a wild and crazy session,” Currie said, noting the Legislature had “a lot of money to spend” and not enough guidelines on how best to go about doing so.

“It needs to work a different way,” she said.

Registered nurse Currie said funds were secured for such entities as Mississippi School of the Arts and Jumpstart Test Prep, as well as for city infrastructure projects — “a lot of good things for Brookhaven.”

Rep. Mangold agreed that a lot was going on in the Legislature this session, saying he asked some of the elder statesmen what was a worse session — one with no money to spend or one with too much money. Without exception, each one told him it was more difficult when there was “too much” money to spend within one session.

Mangold, a farmer himself, said it was a “pretty quiet year” as vice chair of the Agriculture Committee. The major concerns were approximately $600 million of damage done annually to crops due to wild hogs, and accurate labeling of raw honey versus other honey products.

As a freshman senator, Barrett said there were some frustrations of not being able to have a voice in everything he thought he would be able to, but that he was grateful to be representing his hometown and area.

“This is not my senate seat. This is your senate seat,” Barrett said. “The power is in the people, not in the office.”

Barrett said some of the biggest takeaways from the session for him were the distribution of more than $1.8 billion in COVID funds, the $524 million tax cuts, a historic bump in teacher pay, and the MFLEX bill, which focuses more on incentive-based and merit-based tax cuts for industries rather than those based on promises made by the companies.

Questions from attendees focused on whether tax cuts would negatively impact the state’s ability to meet its needs. Currie said the state passed a “more prudent plan” that has “clawback.”

“I think we’ll still be able to pay our bills unless something happens like another pandemic,” Currie said. “If things go badly, it stops. If the economy stops, we stop … I believe we’ll be fine.”

“The squeaky wheel gets the oil,” Barrett responded to a question of how to make sure Southwest Mississippi receives funding to meet its needs. “We must continue to express the desire and need for economic development, hospitals, education and infrastructure … It’s important that we three work together and with our federal people (and) remind them that we (in Southwest Mississippi) have everything to offer.”