Large contingent from BHS set for 5A tennis tourney in Oxford 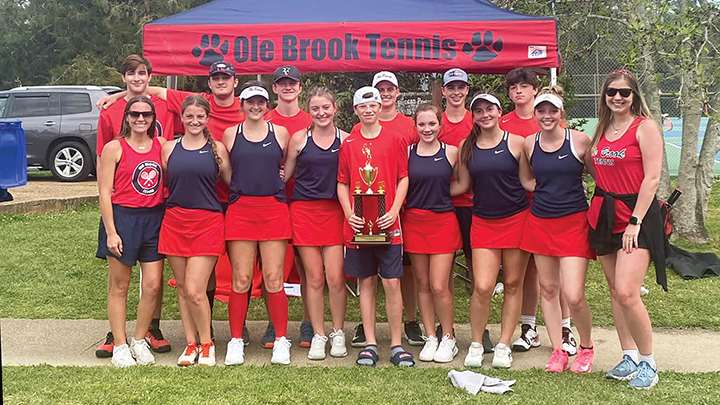 Photo Submitted The Brookhaven High tennis team swept through their region tournament earlier this season and had all 12 players qualify for the MHSAA 5A Individual State Championships in Oxford. Tournament play begins on Thursday for the Panthers.

It will be a busy two days in Oxford for Brookhaven High tennis coach Stephanie Triplett and her assistant Maddie Hickman as Ole Brook tennis is bringing 12 players to the MHSAA 5A Individual Tennis Championships that begin on Thursday and conclude on Friday with the title matches.

Seventh-grader Cohen Leggett is seeded No. 7 in the boys’ singles bracket and opens tournament play with a match against the No. 10 seed from Florence High.

Junior Anna Grace McCreary is seeded No. 8 in the girls’ singles bracket, and she’ll begin her quest for a title with a first-round match against the No. 9 seed from Ridgeland High.

Two teams will represent BHS in the boys’ doubles bracket as senior Logan Case and junior Jeremiah Layton are seeded No. 5 and their teammates Robert Adcock and David Sones are the No. 6 seed in the same bracket.

Case and Layton open tourney play with a match against the No. 12 seeded team from Ridgeland while Adcock and Sones, both juniors, will take on the No. 11 seeded duo from West Jones.

Likewise, there’ll be two teams representing BHS in the girls’ doubles bracket. Freshman Caroline Kilpatrick and junior Lucy Allen are seeded No. 9 while their teammates Lily Gray and Sarah Todd Adcock are the No. 7 seed in the same bracket.

Mixed doubles is one of the places that BHS won gold last year as Robert Adcock and Kilpatrick teamed up to win the 5A title in 2021. Ole Brook also brought home a first-place finish last year in boys’ singles from then senior Sam Allen.

This year’s mixed doubles team is the pairing of Allie Grace McNeill and John Sones. McNeill is a sophomore and Sones is a freshman and together the pair are seeded No. 8 in their bracket. They’ll first face the No. 9 seeded team from East Central.

Triplett knows that the individual tournament is one that often sees players get hot at the right time for a championship run. They may be under-seeded or find themselves playing better against a foe that bested them earlier in the season.

The message to her team is to be prepared for anything.

“We use the term ‘put your game face on’ a lot before we start matches,” said Triplett. “I expect them to step on the court with the mentality that they’re going to win. They should hustle, give their best and leave it all on the court this week.”