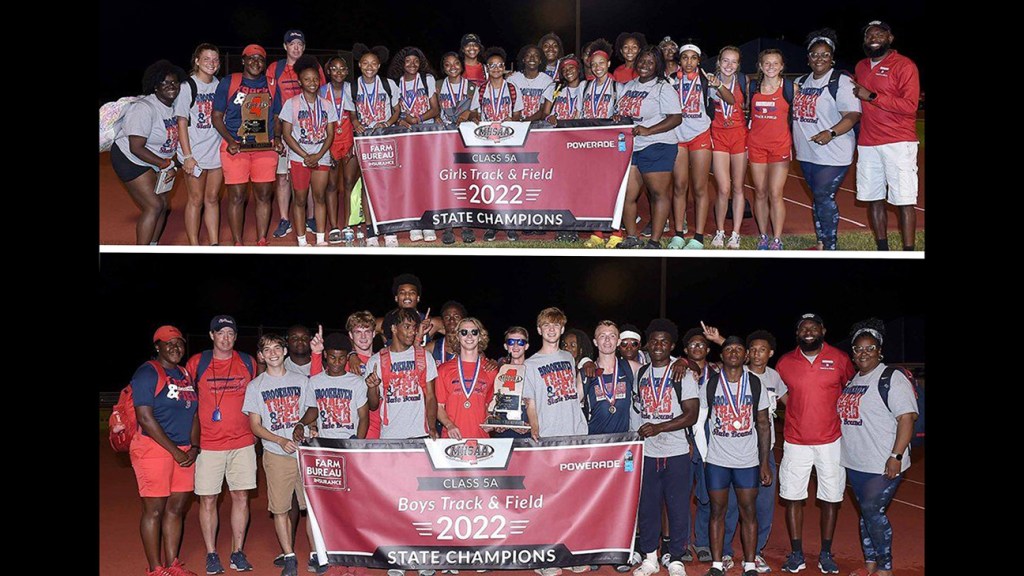 Photos by Chris Todd/MHSAA The Brookhaven High track and field cross-country team brought back two new trophies for the case in the school’s lobby after winning both the boys’ and girls’ championships Saturday at Pearl in the MHSAA 5A State Meet.

The Brookhaven High track and field program has been building a reputation over the last several years as one of the best in the state at the 5A level.

Saturday in Pearl, the Panthers left a pawprint on the record books as they won both the boys and girls state team titles in equally impressive fashion. It’s the first ever state track titles for both teams in the modern era.

The track and field teams at BHS are led by coaches Darien Dorsey, Tonya Johns, Shannon Knott and Sandra Banks.

The boys’ team piled up 149 points in its win, a landslide victory over Columbus High in second place with 70 points.

Both teams came in as favorites after winning the 5A South State Meet a week prior, but Dorsey and the other coaches knew that their team couldn’t’ just show up to the Woody Barnett Track and Field Complex at Pearl High and assume a trophy would be handed to them.

As expected, the BHS boys dominated in the distance events. With a boys’ cross-country team that finished first overall in 5A for a third straight year in the fall, the competition was aware of what the Panthers could trot out in the long runs.

In the 1600-meter race, BHS senior Grayson Childress finished first with a time of 4 minutes and 26 seconds over the distance of one mile. His senior teammates Sam Arnold and Jake Thompson were second and third respectively.

Childress had finished runner-up last season in the same race and the boys’ team as a whole was runners-up in 2021 to Hattiesburg High.

Arnold finished first in the 3200-meter race as he covered the two-mile distance in 10:12 and was followed by Childress in second place and senior Trey Knott in fourth place.

In track and field, points are awarded for top finishers in places one through six. First place gets 10 points, second gets eight, third gets six, fourth gets four points, fifth place gets two points, and sixth place gets one point towards the team total.

Childress also finished second in the 800-meter race and his senior teammate Collin Kellum came in right behind him in third place.

Kellum, Thompson, Arnold and Childress teamed up to dominate the 4×800 relay. The senior foursome finished 12 seconds ahead of the second-place team from Saltillo High.

Brookhaven High also won the 4×400 relay race by just edging out Pearl River Central with a margin that was less than a full second.

Brown was also part of a 4×200 relay team that finished third. Running on that relay with Brown were Nathan Lewis, Smith and Stewart.

BHS also finished second in the 4×100 relay race. Members of that quartet included Stewart, Leis, Watson and senior Elijah Kennedy. Kennedy finished fifth in the 100-meter dash and sixth in the 200-meter dash.

Junior Brodie Ezell came into the day already a state champion once over as he won the discus last season for BHS.

Ezell defended that title as he won the discus with a toss of 161.03 feet on Saturday. Ezell was almost 30 feet longer than the second-place finisher. His senior teammate Kobe Jacobs ended up in fourth place for BHS as well in the event.

It was a personal best throw for Ezell who threw a then personal record of 143-feet last year at the state meet.

The path to victory for BHS on the girls’ side of the competition came through a dominating performance in the relay races. The Panthers won the 4×200, 4×400, 4×800 and were second in the 4×100 relay.

The 4×200 team was made up of Aniyah Cook, Chrisiyona Quarles, Jakira Cook and Kyja Willis. The 4×100 team had three of the four same members with Jayda Johnson replacing Quarles in the rotation.

Pendleton, Jasmine Robertson, Kemiya Crockett and Ellie Slay teamed up to run the 4×800 relay. BHS won that race in a time of 10:26, well ahead of New Hope in second place with a 10:33 finish.

Willis and Cook, both seniors, were fourth and fifth respectively in the 100-meter dash. Cook finished third in the 200-meter and Willis was fourth in that race.

Johnson, a junior, was second in the high jump and Cook, a sophomore, finished in fourth for the same event.

Senior Kortne Nelson finished fifth in the pole vault for BHS, while fellow senior Alexandria Gines was the third-place finisher in the discus.

The senior duo of De’Naejah Williams and Jermyah Murray were the fourth and fifth place winners respectively for the Panthers in the shot put.