Voters will use new equipment in June, at no new cost 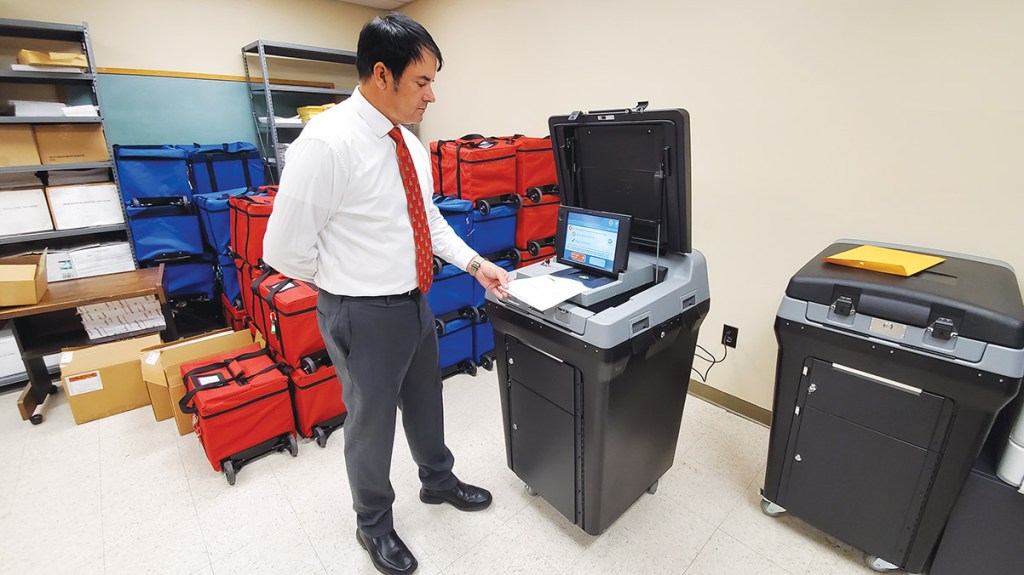 Lincoln County voters will get to use new equipment when they go to the polls this June, and it didn’t cost the taxpayers a dime. In fact, the county will wind up with some money back.

The county’s old equipment was purchased in 2006 and was only intended for 10 years of use, Circuit Clerk Dustin Bairfield said. Utilizing federal grants, his office bought the equipment for a total of $206,370.

The Department of Justice issued new guidelines in 2019 that specified federal grants would only be issued to support local elections if the voting equipment had a paper trail, Bairfield said. The county’s choice was based on which machines met the DOJ criteria, and selected the one that was used most widely in Mississippi and with the greatest ease of use for the voter, he said.

Costs for elections were not expected to increase, because although the law requires a printed ballot be used, printing the ballots with the new equipment costs less than 5 cents each, compared to 30 cents each with the previous equipment. Even though every voter will use a scannable printed ballot now instead of just affidavit or curbside voters, the total cost will remain virtually the same, Bairfield said.

In addition, the State Legislature passed a bill this year that requires each county to use the precinct counters already purchased by Lincoln County. Counties that already made the purchase will be reimbursed for the costs, even though grants were used.

“We should have a little left over to help pay for some other election costs,” said Bairfield. “We got really lucky when the State put that money back to the counties to encourage them to go back to the paper-type ballot like the DOJ wants. We have all-new election equipment at no cost.”

The new scannable ballots will let voters and poll workers know immediately if there are any errors on the ballot, eliminating the need for workers to go back and review every submitted ballot. The ballots will be used after the election to verify and certify the official results.

“The two real advantages are the voter gets to look to verify how they voted, and then poll workers have less equipment, so less that they have to learn how to do,” Bairfield said.

The new equipment is ADA compliant, so anyone who may have trouble filling out a paper ballot can use a touchscreen to vote, and a paper ballot will then be printed. The voter can review his or her ballot to verify it shows they voted how they intended, then the ballot will be submitted.

The touchscreens can also be used in the event a paper ballot cannot be used for some reason, Bairfield said.

“The precinct scanner will be located by the exit door. The voter will insert their paper ballot and the scanner will verify it has been read correctly, or will notify the voter immediately if there is an issue, such as a smudge or something of that nature,” Bairfield said. “That’s a great thing. The voter will know immediately their vote has been counted correctly.”

Who will be on the ballots?

Voters will choose a candidate in the Republican Congressional Primary on June 7. Facing District 3 incumbent Michael Guest are challengers Michael Cassidy and Thomas Griffin. A runoff will be conducted June 28 between the top two vote-getters if one of the three does not get at least 50 percent of the vote pus one on June 7.

The winner of the primary will advance to the General Election Nov. 8, where he will face Democratic contender Shuwaski A. Young. No Democratic primary will take place in District 3, since Young is the only candidate for his party.

Also up for election in November in Lincoln County is the seat for District 2 Election Commissioner. Former commissioner Tiffany Furr resigned in April, and the Lincoln County Board of Supervisors set a special election to coincide with the November General Election.

Anyone interested in running for the post should gather at least 50 signatures of registered voters within District 2, and submit them to the Circuit Clerk’s Office so they can be certified prior to 5 p.m. on Sept. 9. The election will be for a one-year term, since the positions for Districts 2 and 4 will be on the 2023 ballot for their regular terms of office.

Other offices up for election in 2022 include:

Absentee voting is open now in the Circuit Clerk’s Office Monday-Friday, 8 a.m. until 5 p.m. The office will also be open 8 a.m. until noon on two Saturdays — May 28 and June 4.