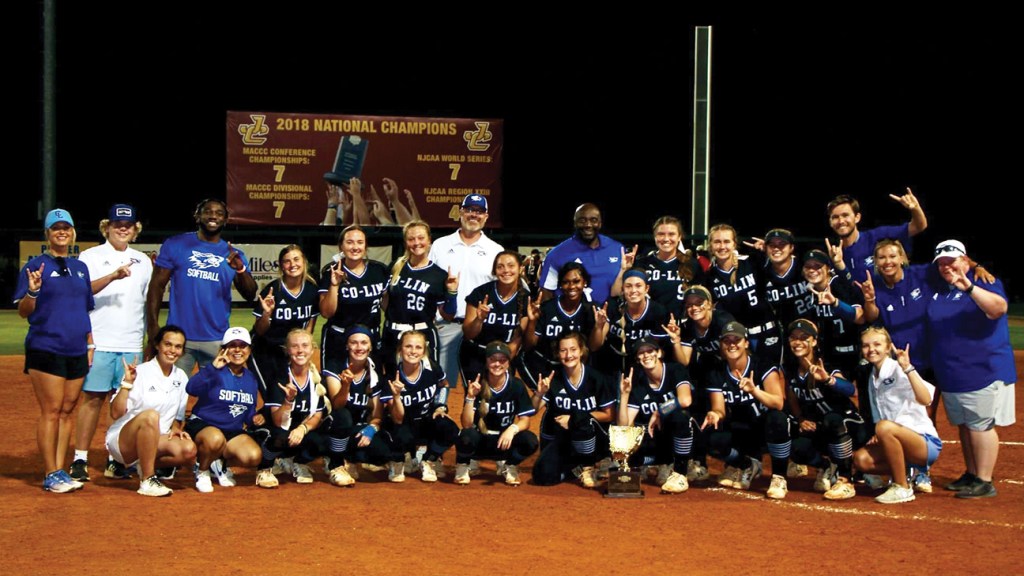 Photos by Co-Lin Sports info The Copiah-Lincoln softball team won the first MACCC state championship since 2009 for the school this weekend at Jones College. Co-Lin next hosts the NJCAA Region 23 tournament that will run from Wed.-Fri. this week in Wesson.

When Meleah Brown Howard came back to her alma mater to become head softball coach at Copiah-Lincoln Community College in the summer of 2018, she talked about wanting to take the program back to the highest levels of the Mississippi Association of Community Colleges Conference (MACCC).

There have been plenty of big moments in the ensuing four seasons for Howard — including a national No. 1 ranking this season — but a breakthrough came over the weekend as Co-Lin battled through the field to win the 2022 MACCC State Tournament at Jones College.

The title was clinched by a 4-3 win for Co-Lin over the homestanding Bobcats.

The finale was tied 3-3 through the first four innings. A Madalyn Wilkinson (Germantown HS) RBI single scored Faith Kivett (Tallulah, La.) from second base and gave Co-Lin the go-ahead run.

Sophomore pitcher Cera Blanchard nailed down the win with a strikeout to end the game for Co-Lin, setting off a huge celebration for the CLCC section of fans at Community Bank Park in Ellisville.

The season is far from finished though as Co-Lin now moves on to the Region 23 Tournament, which ends with the top two teams from the six-team bracket qualifying for the NJCAA Division II World Series in Oxford, Alabama on May 24-28.

As winners of the state tournament, Co-Lin gets to host the region tournament that begins Wednesday with three games.

The tournament is double elimination and will have three more games on Thursday and is scheduled to finish on Saturday with the championship game.

CLCC began the state tournament with a 2-1 win over Northeast last week and then beat Itawamba to set up a winners’ bracket showdown with a Jones team that was also 2-0 at the time.

Jones swept a doubleheader from CLCC during the regular season in Ellisville. On Friday, the game ended up being a back-and-forth battle that ended with a 7-6 win by Co-Lin.

Freshman pitcher Belle West (Hillcrest Christian) came on in relief and pitched two scoreless, hitless innings to get the save.

The win put Co-Lin into the championship game on Saturday and gave the program its first road win at Jones since 2010.

Needing one win to gain the trophy, Howard’s team lost 12-8 to Jones on Saturday in the first game between the teams. A six-run sixth inning broke the lead open for Jones in that game.

To come in with the momentum of being the only unbeaten team left in the field and then to see that advantage taken when Jones won the first game on Saturday — Howard never doubted the grit that would be needed for CLCC to bounce back in the winner-take-all finale of the tournament.

“It took a lot of heart and toughness to accomplish what this team did this week,” said Howard in a release from the school. “They could have laid down and quit, but they found a way to win over and over again. This is the win that we told each of them we were going to get when we started recruiting them four years ago, so to see it become reality is something special.”

The championship was the first state title for the school since 2009. The team also a state title in 2008 when Howard was a sophomore on a team that finished national runners-up for then coach Allen Kent.