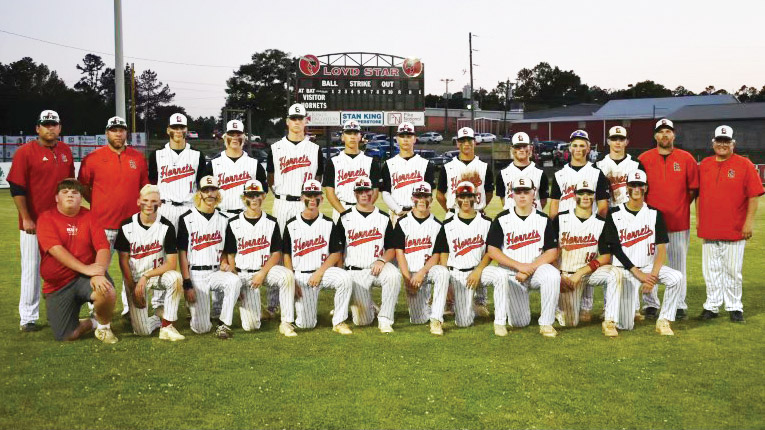 Photo submitted The Loyd Star Hornets saw their season ended by Stringer High in the third round of the MHSAA 2A playoffs on Saturday. Loyd Star finishes the season 22-8-1 and won Region 7-2A by going 12-0 in division play.

The Loyd Star Hornets and Stringer Red Devils combined to light up the scoreboard in their MHSAA 2A baseball quarterfinal series.

To the disappointment of the Hornet fans, it was Stringer who plated the most runs in a pair of high scoring games. Stringer won the opener 12-8 at Loyd Star on Friday and closed the series out in Jasper County on Saturday with a 13-9 victory.

Stringer (26-6) next meets Pisgah High (26-5) in a series this week that will result in one of the teams making the upcoming 2A state championship series at Trustmark Park in Pearl. East Union (27-4) and Pine Grove (23-7) will play in the other 2A semifinal this week.

Trips to Trustmark Park are the ultimate goal for Loyd Star (22-8-1), but a spate of big inning by Stringer proved to be the difference in the series between the schools.

Stinger took control in the fourth inning of game one by scoring five runs that put them ahead 6-1 after 4.5 innings. Loyd Star had a hot streak at the plate as well, scoring five runs in the bottom of the sixth, but that was negated by Stringer adding four runs in the top the same inning.

Senior pitcher Dawson Hester drew the start on the mound for Loyd Star in game one. It was Hester’s first start since he went one inning in a blowout win over Amite County on April 8.

Hester struck out two, walked one and gave up two earned runs on 76 pitches. In four innings, the southpaw gave up five hits.

It was the longest pitching performance of the season by Hester as he’s dealt with an upper body injury that limited his time on the mound in 2022.

“Dawson has been a warrior all year for us,” said Loyd Star head coach Jared Britt. “He battled through pain all season and showed what kind of a competitor that he is.”

Garett Carwyle and Nathan Mills combined to pitch the final three innings of the opener for Loyd Star.

Carter Holcomb, Caleb Smitha and Blake Thornton each had a double for the Hornets in game one. Smith and Riley Easterling drove in two runs apiece.

Holcomb, Thornton and Brandon Burt had one RBI each for the Hornets.

Saturday, Loyd Star gained its first and only lead of the series after a six-run fourth inning put them up 6-5 heading into the fifth.

Stringer, a perennial 1A title contender after moving up to the 2A ranks this season, answered with an eight-run fifth inning to wrestle back control of the game.

Both teams were plagued by errors on Saturday as Stringer made eight as a team and Loyd Star committed five errors. The Red Devils outhit Loyd Star 15-6 in game two.

Easterling started on the mound for the Hornets in game two and went two innings. He was replaced by senior Craig Bass, who closed out the final four innings for Loyd Star.

Thornton, Smith and Casen DeHart all hit doubles at the plate for LS on Saturday. DeHart, Holcomb, Hester, Mills, Bass, Thornton and Smith all had one RBI each for Loyd Star.

A year after losing two seniors on a team that made the state semifinals, Britt’s team will suffer it’s most losses in the pitching rotation this year with the graduation of the class of 2022.

Bass, Easterling and Hester make up the senior class and their absences will be felt, especially on the mound.

Easterling will play baseball a Co-Lin next year while Hester has signed to play golf at Meridian CC.

“Those three guys pushed each other as much as they pushed themselves,” said Britt. “We’re losing a lot of big-game experience with the graduation of Riley, Dawson and Craig.”