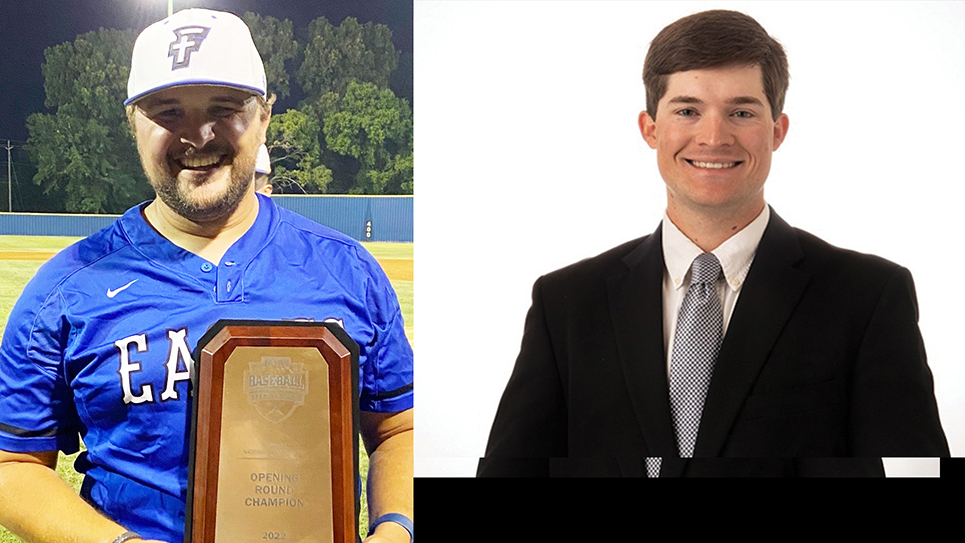 Photos submitted From left, Brett Spring and Scotty Bateman, both Brookhaven High baseball alums, are coaching in the 2022 baseball postseason.

Scotty Bateman and Brett Spring came up through the Brookhaven High baseball program together as teammates for the Panthers as the pair spent countless hours on Moyer Field, practicing and playing the game they loved.

Spring graduated from Brookhaven High in 2014 and Bateman followed the next year as the pair then went on to attend Mississippi State University.

Both Bateman and Spring are pursuing coaching baseball as a career and both have had a season to remember to their respective schools.

Bateman is a first-year assistant coach at Florida State College at Jacksonville. The Blue Wave won their regional and are currently playing in the NJCAA Division II World Series in Enid, Oklahoma.

The pitching coach and recruiting coordinator, Bateman came to FSCJ from Troy University where he was Director of Player Personnel and Analytics for two years.

While a student at MSU, Bateman founded, coached and played on the Mississippi State Club Baseball Team.

When Spring was a student in Starkville, he was a student-manager for MSU baseball including the 2018 team that made the NCAA College World Series in Omaha, Nebraska that year.

Spring is now in his first year as a graduate assistant at Faulkner University in Montgomery, Alabama.

The son of former Brookhaven High head baseball coach and current Brookhaven Academy assistant coach Randy Spring, Brett Spring worked outside of baseball for a time after choosing to further pursue coaching as a career.

Faulkner is currently 39-16 on the season and is playing in the NAIA World Series this week in Lewiston, Idaho.

The Faulkner Eagles began tournament with a 7-2 win over Webber International University on Saturday and then followed that up with a 7-4 victory against No. 2 Tennessee Wesleyan University also on Saturday.

The Eagles suffered their first loss in the double-elimination tournament on Monday with a 7-1 setback to Lewis-Clark State College.

Faulkner is next scheduled to play on Tuesday against LSU-Shreveport in an elimination game.

FSCJ and Bateman are 32-20 and opened tournament play in Oklahoma with a 4-0 win over Phoenix College on Saturday.

The No. 1 ranked Pearl River Wildcats beat the Blue Wave 10-2 on Sunday to give FSCJ its first loss of the tourney.

Jacksonville bounced back to beat Phoenix College 5-3 on Monday and were set to face Lansing Community College on Tuesday in another elimination game.