Hurricane Season: 1 month in, no storms yet; What’s coming? 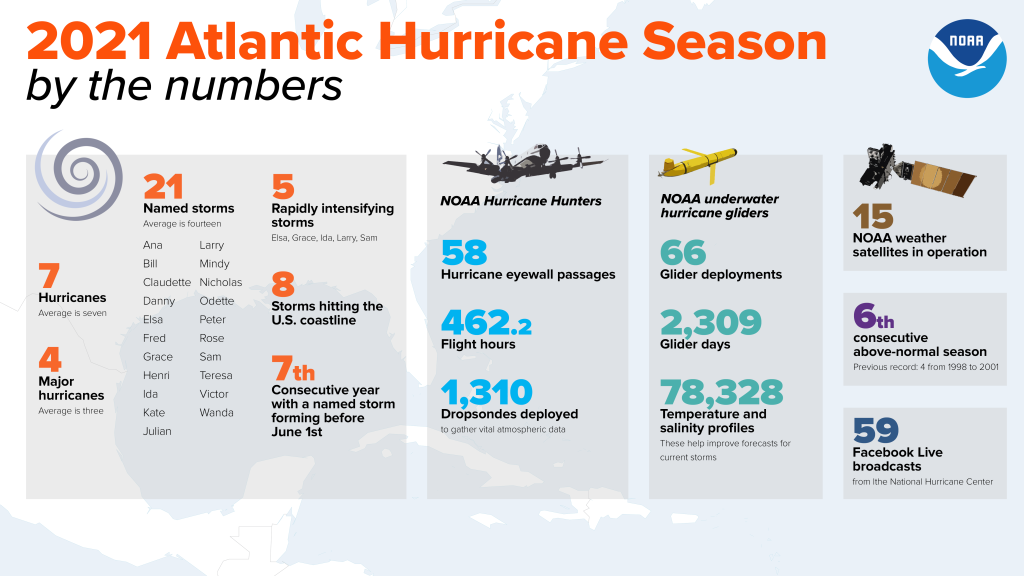 One month into the 2022 Atlantic Hurricane Season, no storms have been named. But what’s ahead for the season?

Researchers from the National Oceanic and Atmospheric Administration have predicted six to 10 named hurricanes for the 2022 season. The season began June 1 and extends to Nov. 30.

NOAA predicts 3-6 to have major impact, due to La Nina and warming ocean temperatures. In 2021, there were 21 named storms and seven hurricanes — only four major ones. That year was the third-most active year on record in terms of named storms, according to NOAA. It was the sixth consecutive above-normal Atlantic hurricane season, and the first time on record that two consecutive hurricane seasons exhausted the list of 21 storm names.

The heightened hurricane activity in recent years is attributed to the warm phase of the Atlantic Multidecadal Oscillation that began in 1995, according to NOAA, which favors more, stronger and longer-lasting storms.

“The hard-working forecasters at NOAA’s National Weather Service weather and water forecast offices and national centers, along with the National Hurricane Center, provided reliable forecasts and advanced warnings around the clock to safeguard communities in the pathway of destructive storms throughout this active hurricane season,” said NWS Director Louis W. Uccellini. “Their dedication and service are a recognized asset to the nation’s resilience to these extreme events.”

No new tropical cyclone activity was expected in the coming few days.

Of the 21 named storms from the 2021 hurricane season, six caused damage in the millions of dollars, and seven claimed lives. “Direct deaths” include those who drowned in storm surge, rough seas, rip currents or freshwater floods; and those who died as a result of lightning and wind-related events.

Hurricane Katrina, which struck in August 2005, remains the storm to have caused the most damage to the U.S. in terms of cost, resulting in $161 billion dollars in damage.