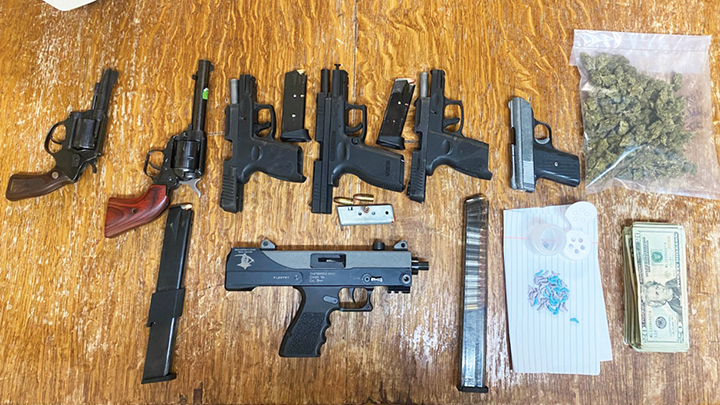 A newly-formed Street Crimes Unit in the Brookhaven Police Department has proven its worth on the same day it was created.

“The unit was set up to take control of the streets,” said Sgt. Jonathan Hart. “To confiscate guns, get drugs off the streets.”

“And to serve warrants and for burglary suppression,” Det. Tim Sanders said.

At approximately 9 p.m. Tuesday, officers were waiting for a wrecker to pick up a vehicle obstructing the roadway on Georgia Avenue near North Jackson Street. As cars came by, officers asked drivers to show their licenses and proof of insurance.

Det. Sanders saw a maroon sedan with a headlight out and motioned for it to stop, but it continued to 309 Georgia Ave. Sanders made contact with the driver and passenger, and discovered both had active arrest warrants.

As Sanders was talking with the car’s occupants, Assistant Chief Clint Earls recovered a large bag of marijuana approximately 40 yards behind the vehicle, on the side of the street. The driver denied it was his, but a witness told officers the driver had opened his door and dropped the bag out onto the roadway.

The driver was arrested and charged with felony possession of 48 grams of marijuana and transported to the Lincoln County Jail.

Officers then set up a roadblock, and Sanders saw a van attempting to turn around to avoid it. Police stopped the vehicle and conducted a search, recovering 51 dosage units of methamphetamine and several firearms, Sgt. Hart said. Approximately $4,000 in cash was also found, but was returned to its owners because detectives could not prove it was tied to the illegal drugs.

“We want to be legal in everything we do,” Chief Kenneth Collins said. “We’re trying to stop some of these gun crimes. We’re trying to keep our city safe.

“Some of the so-called homeless are committing these crimes, some are prostituting, or making a living by shoplifting. We’re trying to be proactive rather than reactive.”

You asked: How do I get my streetlight fixed?